"I have never killed a man, but I have read many obituaries with great pleasure." —Clarence Darrow (1857–1938)

Well, the aptly named Robert Strange McNamara has finally shuffled off to join LBJ and Dick Nixon in the 7th level of Hell.

McNamara was the original bean-counter — a man who knew the cost of everything but the worth of nothing.

One obit I’m looking forward to is McClatchy newspapers.

Mr Galloway gets it right.

Hey Galloway, say tally-ho to Judas and Brutus in the Circle of Traitors (9th) as soon as you get there. And happy pitchfork-sitting, you Imperial Wanker.

Mr. Galloway has no way of knowing where Presidents Nixon, Johnson or Secretary McNamara are right now. If they were right with God they are with the other saints, and if not, they are where Mr. Galloway predicts. But he has no more idea of which is which than the rest of us. German Chancellor Adolf Hitler could be in Heaven if he was saved or was mentally ill and therefore not responsible for his evil actions. I’m guessing that Mr. Galloway doesn’t believe in Heaven or Hell anyway, but that’s beside the point.

He’ll be standing alone before His Maker.

Those other two will in their own time, also alone.

We’re not splitting the responsibility McNamara was given today.

We’re sending him off, and the responsibility for his own actions go with him.

It just infuriates me that evil people can’t be evil enough, unless the name Nixon is tied to them.

5785, Today an evil man died, and yes he was a Dick Nixon level offender.

It’s not that Galloway...

"..During the Vietnam War, Galloway served three tours in Vietnam for UPI, beginning in early 1965. Decorated for rescuing wounded American soldiers under heavy enemy fire during the battle at Landing Zone X-Ray in the Ia Drang Valley, he was the only civilian awarded the Bronze Star by the United States Army during that war.[2].."

That is “George Galloway” the British politician and as big a rotter as you say.

This amply explains why McClatchy is on its way to the dustbin of history.

13 posted on 07/06/2009 4:47:45 PM PDT by The Right Stuff
[ Post Reply | Private Reply | To 1 | View Replies]
To: smokingfrog; All
I wonder if it ever occurred to Joe Galloway that Robert McNamara carried out policy, he didn't set it. For that you put the blame on the president, whether it be JFK or LBJ. That's where Galloway's wrath should be aimed. You noticed no mention of the Camelot crowd that was responsible for the whole mess. What selective indignation!

Galloway is a jerk.

Ooops...I pulled a Biden again. Thanks for the heads-up.

15 posted on 07/06/2009 4:50:39 PM PDT by rfp1234
[ Post Reply | Private Reply | To 11 | View Replies]
To: smokingfrog
Was Mcnamara one of those who decided that he knew more than Eugene Stoner, and decided that the specs on the original M-16 were "too much," and got rid of the chrome plated chambers and changed the powder specified? All of which caused the initial problems with the M-16, and led to many failures under enemy fire? 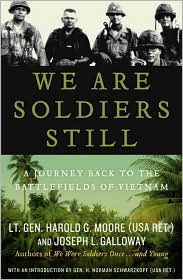 Galloway is a strong supporter of the chosen one so I really dont give a flying rat’s penis what he says, but his point is well-made.

Anyone who follows history impartially would come to the conclusion that Strange was a traitor.