It’s not a matter of actually feeling offended by anything, it is just that we like to use the tactics of the liberals against them. We can play the “we are offended” game as well as they can, and some of the useful idiots in the media even believe it and give us good coverage sometimes. Look at the Palin / Letterman thing - that was a very big win for our side, and the liberals are still reeling from the defeat.

This is after 8 years of whining and outrage by the Dims.

“typical of the left”
Exactly.
Mel Brooks pegged lieberals: “Comedy is when you (Palin)fall through a manhole; tragedy is when I (Obama) stub my toe.”
Ridicule of conservatives is hilarious, thigh-slapping humor and to be encouraged; ridicule by conservatives, on the other hand, is hate speech and to be condemned.

And Obama’s daughters? Got knocked up at a baseball game while Obama was giving an interview.

Liberals want to be thuggy without us being allowed to notice.

The author is immature and petulant.

"Sasha Obama was walking down to score some drugs when she saw her sister Malia working the corner of 5th and Main. Malia had been turning tricks for a long time on that corner, and ..." 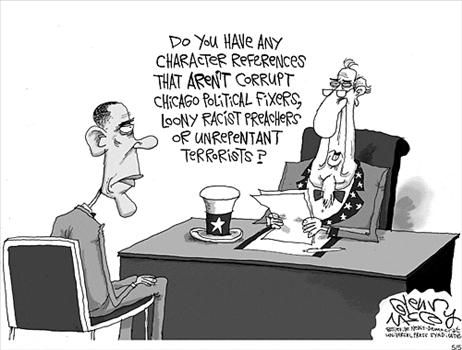 And Obama’s daughters? Got knocked up at a baseball game while Obama was giving an interview.

Liberals want to be thuggy without us being allowed to notice.

Senator Ensign R-NV admits affair with married staffer. This is the guy who said after Lewinsky that Bill Clinton has no credibility left. I have been laughing about that all morning!

51 posted on 06/17/2009 9:04:57 AM PDT by mono
[ Post Reply | Private Reply | To 30 | View Replies]
To: AreaMan
IMO, it's not that we are not seeing humor in something, I think it's more that we are sick and tired of the double standard. If a conservative went on Leno and made any reference to a mentally challenged kid, that person would have been ridiculed all over the place. The left would not have laughed. If a comedian said that they hoped that Pelosi or Reid would have kidney failure, the left would not have laughed. If someone said anything about Obama's daughters being raped, once again, no laughter from the left.

It's the hypocrisy that I have a hard time laughing at...

Democrats refuse to allow any ridicule of thier politicians.

Where are the jokes on SNL about Obama dragging his telprompter and plastic greek temple around?

Where are the jokes about Michelle Obama manly ugliness being spun as “hot”?

Where are the jokes about obama pushing socialism but saying it is not socialism?

Where are the actual barbs on the late attacking and ridiculing democrats?

53 posted on 06/17/2009 9:07:41 AM PDT by longtermmemmory (VOTE! http://www.senate.gov and http://www.house.gov)
[ Post Reply | Private Reply | To 1 | View Replies]
To: Hildy
Alot of this is misplaced anger and the feeling of powerlessness. It’s easier to effect change on a late night TV show than the state of the country. PEOPLE ARE ANGRY.

He went public because he was being blackmailed (his term) by the husband of the woman. So the cuckolded husband himself has committed a crime. I hope he's prosecuted for his efforts.

We are all sinners, some try to make excuses for the sins.

During the primaries, he bowled a 37 in Altoona.

It was the strangest score in Pennsylvania history since Nick "Bowling for Dollars" Perry scored a 666 with the Lotto ping-pong balls.

There is no truth in the Pravda media. It serves the Party.

And that goes for smearing the opposition as well. Nothing but propaganda.

President Obama was visiting a primary school and he visited one of the classes. They were in the middle of a discussion related to words and their meanings. The
teacher asked the president if he would like to lead the
discussion on the word ‘tragedy’?

So our illustrious president asked the class for an example
of a ‘tragedy’.
One little boy stood up and offered:
‘If my best friend, who lives on a farm, is playing in
the field and a tractor runs over him and kills him, that would be a tragedy?’

A little girl raised her hand: ‘If a school bus carrying 50 children drove over a cliff, killing everyone inside, that would be a tragedy.’

‘I’m afraid not,’ explained Obama.
‘That’s what we would call great loss.’

The room went silent. No other children volunteered. Obama
searched the room.’Isn’t there someone here who can give me an example of a tragedy?’
Try this for Comedy, LIBTARDS!
Finally at the back of the room, Little Johnny raised his

hand. In a quiet voice he said: ‘If the plane carrying you and Mrs. Obama was struck by a ‘friendly fire’ missile and blown to smithereens that would be a tragedy.’

‘Fantastic!’ exclaimed Obama. ‘That’s right. And can you tell me why that would be tragedy?’

I’m just waiting to see what Letterman’s “edgy” humor will look like when he decides to go after the Obama family.

Which, I think, is the point. What most people are ticked about isn’t so much the fact that we’re the butt of someone’s jokes, but that there is a double standard. The same kind of humor directed at the Obama kids would be clearly out of line, and even a jerk like Letterman would be afraid to do it. But if you’re a conservative, you are fair game. Thats what gets under people’s skins.

As for me, I tuned Letterman out a decade ago. If he ever decides to get edgy with Mrs Obama or her kids, I’ll have to read about it here, because I simply haven’t watched him in years.

The Dems. did walk all over the Republicans. Pretty sad.