Many scientists say we have global warming. They point to some exceptionally hot years and other evidence. Many climatologists are now making the case for global cooling as well. Record low temperatures and record high snowpacks the past 2 years, and decreasing solar activity appear to be their key arguments.

This article will not take sides. After reading this brief article you will have enough knowledge to decide for yourself.

Reading this will give you a solid understanding of Earth's main climate history that is currently known and proven.

With this knowledge you can better analyze the competing claims about cooling and warming and put them in perspective.

As you view the climate history graphs you will notice that climate is never 'stable'. You will learn that both global warming and global cooling have happened hundreds of times previously.

Earth is always warming or cooling in somewhat predictable cycles, or it is in a brief transition from one cycle to another.

Several projects have been undertaken that involve drilling extremely deep holes into the Arctic and Antarctic Ice. All of the ice started out as snowflakes, falling through the atmosphere. It is not frozen sea water.

As the snow piles up it compresses into ice. The snow has been piling up and turning into ice for over 500,000 years. Gas bubbles and other particles trapped in the ice have allowed scientists to recreate the atmosphere and temperature history going back over 450,000 years. The two main Ice Core projects were the Vostok and EPICA deep ice core surveys. The temperature data is accurate to better than 1/100th of a degree.

As you view the climate history charts you will see a clear ongoing pattern of long ice ages (glaciations), separated by comparatively brief warm intervals (interglacials).

We are currently living our lives during a warm interglacial, between ice ages, called the Holocene.

The Holocene started with a massive warming event about 12,000 years ago. That was a good thing because the ice was several kilometers thick and it covered Canada, the UK, Northern Europe, and almost half of the USA.

Climate Of The Last 5 Million Years:

Note: The present is the right side of the graph. 1.The pattern of ongoing warming and cooling is obvious. 2. The overall trend is downward. The ice ages (glaciations) are getting colder.

Note: Everything below the dotted line (Zero degrees C) represents glacial Ice Age Conditions. The warm spikes are so consistent it almost looks like a heartbeat monitor.

1. The climate history shows that Holocene temperatures peaked about 8,000 years ago.

2. The recent temperature rise following the Little Ice Age (1650-1850) is in line with - or less than - the many other global warmings during the Holocene.

Note: The Holocene warming was accompanied by a sea level increase of over 350 feet. See Graph: Holocene Sea Level Rise

After pondering the ongoing climate cycles the statements "humans cause global cooling" and "humans cause global warming" become questionable at best. How can anybody say such things about warming and cooling cycles that have been ongoing for millions of years, way before humans came along?

Sure, we have trashed out our environment, depleted our oceans, etc., etc., but it is unrealistic to assert that humans can control the climate one way or the other. Some things, like climate change and continental drift, are natural phenomena that are way beyond human control. The belief that "humans can control the climate" is based on both undeserved bravado regarding human capabilities, and complete disregard of the known climate history. Anybody who believes that new taxes will create a stable climate is kidding themselves.

But what about CO2?

1. During the late Ordovician Period CO2 levels were 10 times higher than today's CO2 level, but Earth went into a long Ice Age period.

2. Current CO2 levels are at the low end of the scale when viewed in a historical perspective. CO2 is presently only 0.038% of the atmosphere. Natural water vapor causes 95% of the greenhouse effect.

3. Claims that "today's CO2 level is the highest ever" are flat out lies, and they indicate the speaker has no knowledge of Earth's proven climate history. 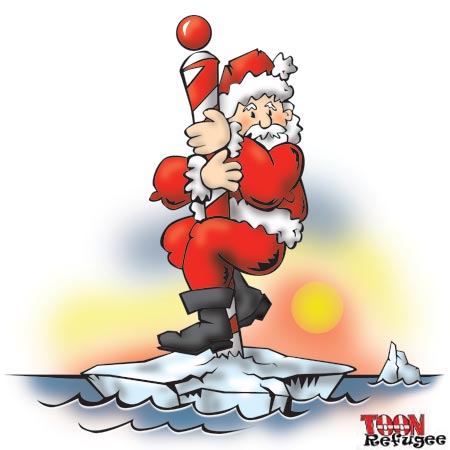 OK.....everybody pony up ten bucks and let’s get this FReepathon over....

I like how either way, Algore was right. A lot of these Cult leaders should take a cue from Algore. The world WILL end in 2021. Or not. Either way let me marry your hot daughters off to my pals.

No, It is all Global Fooling.

And I’m bored with it.

Here’s what Senator Mel Martinez (RINO-FL) wrote in response to my letter:

The whole idea of “man-made global warming” is a pagan religion. Obama and his Congressional Socialists (which includes a number of RINOS) think they are high priests of Global Warming, beating on the drums, praying to the Greenhouse Gas gods, spreading ignorance around the country.

Obama wants Cap & Trade, which would be a death sentence for our economy. I have to wonder if Obama and the other Socialist supporters of this legislation are aware of basic facts. For example: 1) greenhouse gases are not evil, they are essential to keeping the earth warm enough for humans; 2) the most common greenhouse gas is water vapor; 3) CO2 is not pollution, it is essential for plants and humans; 4) CO2 is only a trace element in the atmosphere at 380 parts per million; 5) humans and their activities account for only 3% of CO2 emissions each year; 6) the earth has had cycles of cooling and warming about every 1,500 years due to variations in the sun’s activity and our orbit around the sun; 7) these cycles are beyond human control; 8) about 1,000 years ago, Greenland had vineyards; 9) the earth is cooling now, not warming relative to prior decades; and 10) a major reduction of sun spots in recent years suggests a coming mini ice age.
An excerpt from the March 2009 issue of The American Spectator: “All scientists agree that if man-made global warming is real, it would leave a fingerprint in the form of temperatures increasing with altitude in the tropical troposphere portion of the atmosphere up to a hotspot about 10 kilometers above the surface, reflecting the pattern of CO2 and other greenhouse gases in the atmosphere. Warming due to solar variations or other natural causes would not leave such a fingerprint pattern. Recently, higher-quality temperature data from balloons and satellites ... enables us to settle the man-made global warming debate definitively. The data from weather balloons shows the opposite pattern: no increasing warming with altitude, but rather a slight cooling with no hotspot. The satellite data shows the same result: no increasing temperature with altitude, no hotspot, no fingerprint, maybe again a slight cooling with altitude. Game over. QED. The global warming empire is rattling around but has not and cannot come up with an effective response. The data is the data. The science is the science. Man-made global warming is a hoax developed to serve powerful special interests.” (This was written by Peter Ferrara.)

Obama may not know these things, or he may be choosing to ignore the facts in order to create a huge new bureaucracy of socialist government control over our lives. Cap & trade would cause a huge Decrease in GDP along with a huge Increase in energy costs for Americans, and massive unemployment - probably higher than 15%.

Everyone should write to his or her Congressmoron. Remind them of the facts and the damage that would be caused by “cap & trade”.

They don’t give a damn about the facts. It is all about the perception of Washington.

It seems that a lot of people are. I think though it is time to pay attention because cap n scam is headed for passage whether we like it or believe in it or not.