Reports that 27 new VLCCs, or very large spot market in the first quarter of 2009 may not augur well for shipowners, a research note from London-based brokers ACM Shipping said.

The news of the new vessels joining the market comes as OPEC has just announced a cut in crude production.

Last week, OPEC announced the third in a series of crude output cuts since September totaling 4.2 million b/d, with the latest reduction expected to see a cut of 2.2 million b/d.

Meanwhile, according to the research note, six new VLCCs will join the fleet in January, followed by five in February and eight in March.

"Rounding up a bit we could argue then that the long-haul tanker fleet will grow by the equivalent of 27 VLCCs over the next three months," the ACM note said.

Commenting on the report, a charterer with a Japanese oil major said: "The total number of VLCCs [in the market] is around 500. So 27 [new ones] means 5% of the entire fleet. It will affect the market.

"[Also] the bad economic situation will not improve soon, and now owners don't have any choice because they can't sell their old vessels."

The ACM report said that with close to 70 per cent of OPEC's cuts expected from Middle Eastern producers, nearly 20 VLCC cargoes a month could be lost in this region.

And with the 27 new vessels this could "leave owners facing a massive cargo shortage equivalent to 47 VLCC stems a month by April and that's if OPEC doesn't cut again before then!" the note said.

Separately, the note said that there were reports of 40 VLCCs taken by various charterers, with storage options added to either with the time charter agreements or spot chartering deals.

"We expect up to 10 to be storing oil in the Middle East," the ACM note said.

Some of the vessels heard to be on storage duty are:

Here's hoping that these new ships come equipped with a few CIWS stations.

This article made me think of Waterworld, where a colony of renegades lived on the ocean on a bunch of barges and ships tied together. These excess ships may come in handy yet.

I hope they build drilling ships and Floating Production with Storage units with those older smaller tankers.

But with the falling oil prices, that investment route is dried up as well. 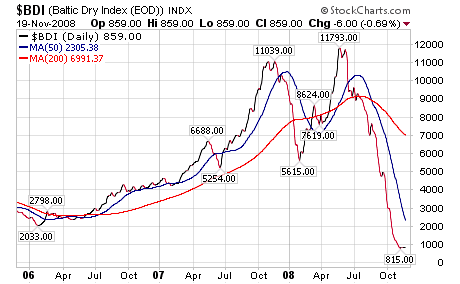 These dry bulk shippers are running their older ships aground in Africa for scrap metal.

In the past, “creative” to some tanker owners has meant collecting insurance for staged losses.

Seems to me that the older single hull vessels would make excellent pirate bait.

Those single bottoms can’t call at US ports any more...

Can’t call at the majority of ports these days...hence, the pirate bait.

This happened beforein the 1970’s. Older less efficient ships went to the scrapyard, some were mothballed until the market righted itself.