Stan Lee hosted a fundraising event back in 2000, the "The Hollywood Gala Salute To William Jefferson Clinton And Hillary Rodham Clinton" arranged by Peter Paul, the man behind Stan Lee Media, the internet venture that eventually collapsed into bankruptcy and Paul was jailed after pleading guilty to stock manipulation.

Hillary Clinton's campaign team recently resubmitted their report to the FEC, stating that Stan Lee contributed $225,000 in 2000 to her Senate campaign.

However in a deposition back in 2005, (handily just uploaded to YouTube here and here), Lee states that he did not make such a financial contribution to her campaign. He does, under oath, describe himself as the co-creator of Spider-Man and Hulk.

It looks like this was a proxy donation to Clinton's Senate campaign, by Peter Paul for unknown reasons. Paul not only served time for insider trading regarding Stan Lee Media, after being extradited from Brazil, but has a history of drug dealing and international fraud convictions from the 1970s. After his past was revealed, Clinton distanced herself from Paul.

This matter is being revived just as Clinton's campaign for Presidential candidacy has received a boost... but my favourite clip is from a forthcoming rightwing attack video, with Hillary talking to Peter Paul about the fundraising event, with Stan Lee jumping in.

STAN: I thought myself it was because we're offering everyone a free comic book but I guess I was wrong.

HILLARY: Oh I think that's a big draw myself, it's the reason I'm coming

HILLARY: Stan, what we haven't told you, is that you're going to be the next Secretary of Defence.

STAN: Well, I expected that.

HILLARY: Because superheroes will be a lot cheaper than the missile defence system.

STAN: You've got the mutant vote right around the world.

HILLARY: Some people think I'm the mutant candidate, so I should have.

I can hear the CafePress engines whirring right now.

3 posted on 03/12/2008 7:51:35 AM PDT by KentTrappedInLiberalSeattle ("John McCain is to conservatism what Cindy Sheehan is to the Miss Universe Pageant.")
[ Post Reply | Private Reply | To 1 | View Replies]
To: Behind Liberal Lines

4 posted on 03/12/2008 7:53:25 AM PDT by Vaquero (" an armed society is a polite society" Heinlein "MOLON LABE!" Leonidas of Sparta)
[ Post Reply | Private Reply | To 1 | View Replies]
To: KentTrappedInLiberalSeattle; Behind Liberal Lines; doug from upland
Been there. 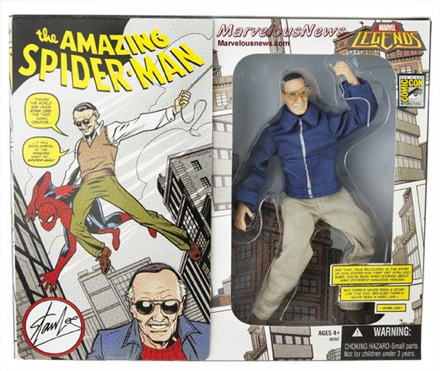 Got the action figure.

Is this the Stan Lee that created Spiderman? I met him about 10 years and a REALLY nice guy.

9 posted on 03/12/2008 7:57:48 AM PDT by Red Badger ( We don't have science, but we do have consensus.......)
[ Post Reply | Private Reply | To 6 | View Replies]
To: Behind Liberal Lines
Clinton & Co. just love proxy donations. What about the China Town dishwasher donations, Mr. Hsu, The whole Jewish town in upstate NY that gave large sums to her Senate campaign. Not to mention Bill's questionable fund raising tactics.

These two should be in prison along with their enablers the MSM!

I don’t understand why Stan Lee doesn’t have a ton of money.

12 posted on 03/12/2008 8:05:42 AM PDT by Aria (NO RAPIST ENABLER FOR PRESIDENT!!!)
[ Post Reply | Private Reply | To 6 | View Replies]
To: Nateman
Ever notice how the Clinton approval rating went up as more sleaze was revealed? Until this witch is frog marched to jail scandles will only help her.

Do you think the Eliot Spitzer fiasco is a cover so the media won't look at Stan Lee's case??

“I don’t understand why Stan Lee doesn’t have a ton of money.”

Earning a ton of money, and keeping it are two different things.

No.RATS would not give up a Governor of New York for so little in return.They will simply ignore this and any other Clinton scandal as "old news"

For clarity, the history of drug dealing is a guy who had been busted earlier in the day and told the feds, "How would you like to get a big attorney?" He delivered coffee samples to Peter's garage that contained cocaine. The SWAT team was there a half hour later to make a bust. Set up? The international fraud conviction was an incredible sting against Fidel Castro that ripped off $8.7 million from the communist swine (several million of which went to fight Castro's activites in our hemisphere). Had Jimmy Carter not been president, a Medal of Freedom might have been awarded. The plans for the Cuban Coffee Caper were all caught on tape with a government wire, but the government let it happen anyway.

Most of the classic comic book characters were created under a "work for hire" arrangement where the creators assigned the rights to the publisher in exchange for their regular salary or page rate.

A few years ago, Lee sued Marvel, claiming that they had promised him a percentage of the Spiderman movie profits but then reneged. I'm not sure what happened to that suit. If other cases are any indication, the studio is probably trying to claim the film didn't turn a profit through creative accounting.