When Mallard Fillmore quacks, I listen. Recently Mr. Fillmore saw fit to expound on a certain female presidential candidate. This is what he had to say:

Abby: "I think girls should be treated exactly the same as boys. ... Except when they wanna be treated better, because they're girls!"

When someone hints that Hillary Clinton is an intsy-wintsy bit inconsistent in her statements, she lapses into full pout mode, accusing her opponents of "piling-on." Or she coils up like a snake ready to attack — "Well, now the fun part starts," Hillary recently warned Barack Obama of her impending offensive that never seemed to materialize.

Many view Hillary as calculating and cold-hearted. When my own wife glimpsed a picture of the Democratic candidate, she pounded her fist on the well-coifed image and exclaimed, "I despise that woman!"

In response to polls saying half the American electorate would never vote for her, Hillary Clinton recently launched a "likeability" campaign. As communication director Howard Wolfson explained, "Now they [the voters] want to know what motivates her."

Hillary's warm-and-fuzzy politics was the focus of a December 9 article in the New York Times: "Clinton Proudly Talks of Scars While Keeping Her Guard Up." Doesn't it make you proud to know we have fearless leaders who are still in touch with their inner victim?

The article depicts Clinton as both a warrior-princess and political punching bag, along with the inevitable male-bashing. Hillary recounted a note she had received from her recently-deceased friend Diane Blair. "Whenever you have trouble coping, just think of Snow White. She had to live with seven men."

Hillary imagined that was funny.

Have you seen the latest campaign video featuring Hillary's own mom? The best the rotund Mrs. Rodham could say about her daughter was — get ready for this — she's "helpful," "never envious," "she has empathy," and most of all, "what a good person she is." [http://www.hillaryclinton.com/video/80.aspx]

If you are one of those persons who falls in the "undecided" category, that ringing endorsement no doubt will carry the day.

And earlier this week Bill showed up in Iowa, telling voters what a swell person Hillary is. Must be nice to tout your credentials as strong and independent, then lay claim to victim status at the hand of a serial philanderer, and finally summon hubby to revive a faltering campaign.

HRC's likeability campaign is turning out to be nothing more than the latest rendition of "I am woman, hear me whine."

Every day Mrs. Clinton talks up her candidacy as the Great Turning Point in History, the moment in time for women to shrug off 500 (or is it 5,000?) years of patriarchal domination and show they are the equals to men. The solution, of course, is more government programs, set-asides, and gender quotas.

I suspect the voters are beginning to tire how Mrs. Clinton parades her hurts as a badge of honor. In a recent interview she shamelessly worked the female victim angle: "But you know, our scars are part of us, and they are a reminder of the experience we've gone through and our history."

This is shaping up as the first presidential election in history in which the candidates' qualifications are defined not by their personal character or legislative accomplishments, but rather by who is the greater victim.

John Edwards can lay claim to being ripped off by his hair stylists — I'm sure Hillary never had to shell out 500 bucks for a supratentorial trim. Barack Obama can bitterly complain the Census Bureau doesn't recognize Kenyan-Americans in any of its racial categories.

On the Republican side, Rudy Giuliani can talk about how, as a survivor of prostate cancer, everyone who really "cares" should rally to his side. Mitt Romney's cross to bear is how all those Massachusetts liberals mercilessly piled-on when he was governor. Poor John McCain can't find a single soul willing to stand up and clap for his stump speech.

In the feel-my-pain sweepstakes, Hillary Clinton is currently the undisputed leader. But watch out, this race is getting tighter by the week. Come November 4, only one person will lay claim to the long sought-after title, Victim-in-Chief.

Maggie Thacher and Golda Meir. Sorry Hill that yoke has already been tossed.

8 posted on 12/20/2007 1:36:59 PM PST by PGalt
[ Post Reply | Private Reply | To 1 | View Replies]
To: FreeManDC
accusing her opponents of "piling-on." Or she coils up like a snake ready to attack — "Well, now the fun part starts," Hillary recently warned Barack Obama of her impending offensive that never seemed to materialize.

And that’s only the D’s.

Exactly! And not even all of them. Did I mention delusional? 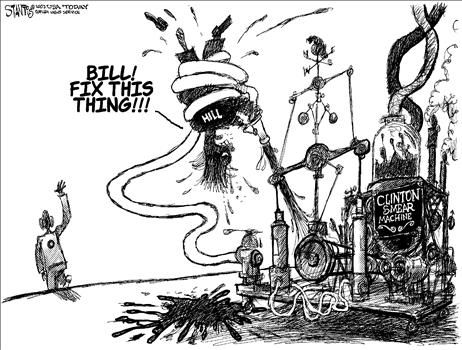