Omar Khadr seems an unlikely poster boy for the war on terror. Khadr is a Canadian citizen, he likes Harry Potter, and he was only 15 years old when he was captured by the U.S. Army in Afghanistan. And that's what makes his case so controversial: his age.

As correspondent Bob Simon reports, Omar Khadr is the only person in modern history to be charged for war crimes he allegedly committed while a minor.

60 Minutes got a rare glimpse into a Guantanamo case -- one of the first that will be prosecuted. Consider this: is Omar Khadr a hardened terrorist -- a bad seed, or an obedient son, led astray by his family?

The U.S. accuses Omar Khadr of murdering an American soldier, conspiracy, spying and more, all done, they say, when he was just 15 years old. Khadr has been detained in Guantanamo Bay for five years, much of it in a maximum security prison, in a cell with no windows, awaiting a military trial.

His lawyers say that due to his age when he was taken prisoner, he should have been considered a child soldier and shouldn't be there at all.

As is, the U.S. calls him an unlawful enemy combatant, a euphemism for terrorist. 60 Minutes was not allowed to speak to Omar Khadr. But Dennis Edney, one of his lawyers, has visited him in Guantanamo several times.

But Omar Khadr faces serious charges and, if convicted, could face up to life in prison. He was captured in eastern Afghanistan, a region notorious for harboring members of al Qaeda and the Taliban. In July 2002, U.S. Special Forces were patrolling the area when they got a tip that some al Qaeda members were holed up nearby.

"These guys just shot them point blank in the face," Morris says.

He says two interpreters were killed instantly. And then Sgt. Morris felt something hit his right eye.

"A piece of the hand grenade shrapnel cut the optic nerve," he says. "So I'm blind in one eye."

The fighting went on for hours. By the time it was over, the compound was completely destroyed by 500 pound bombs.

Morris didn't think anybody inside the compound could still be alive. "The assumption was that everybody's dead in there," he says.

But when soldiers went in, someone threw a hand grenade at them. One of the medics, Sergeant Christopher Speer, was killed. Then they found Omar Khadr, barely alive, lying in the rubble and blinded in one eye, just like Layne Morris.

"He's lucky," Morris says. "Because he killed one medic. The second medic saved his life."

Asked if the medic described the kid, Morris tells Simon, "All he said was, 'Man, we got up on that kid and he begged us to kill him.' He said 'Just kill me.'"

And he said it in perfect English.

The U.S. Department of Defense declined to give 60 Minutes an interview about the Khadr case, so Simon spoke to retired General John Altenburg, a lawyer who reviewed the initial evidence against Khadr and counseled the military to put him on trial for war crimes.

"I understand that the evidence reveals that a grenade was thrown over a wall, but that nobody saw him throw it," Simon remarks.

"I think it's fair to say that no person saw him actually throw the grenade," Altenburg replies.

So why the charges?

Says Altenburg, "Because there is circumstantial evidence that would indicate he was the one who threw the grenade."

Meaning no one else was found alive who could have thrown it. 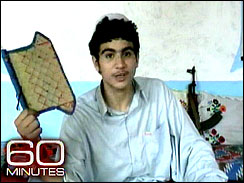 "Were you in some way sorry that you did not die that day?" Crile asked Abdul Karim.

Sorry, he said, because he was denied the opportunity of getting to paradise, where 72 stunning virgins would await him. "Somebody would look at them like for 40 years and he would stay looking and looking," Abdul Karim said.

"Because they’re so beautiful?" Crile asked.

"Yeah," the teen replied. "And one piece of her perfume would come it would, you wouldn't smell anything but that."

"Mrs. Khadr, can you explain the concept of the virgins for the brothers?" Crile asked Maha Khadr.

"Yes. They talk about it day and night. And sometimes, some wives would get so, you know, kind of annoyed or they say, 'Well is this all you’re fighting for?' You know? Because they really just go in too much details about the description," she replied.

Abdul Karim said he even offered to become a suicide bomber. "I told my father, 'Just give me a belt and I’ll blow myself up. I'll go and just do anything,'" he said.

As for his brother Omar, Abdul Karim believed he'd get out of Guantanamo and get even. "When he’s all right again he’ll find them again … and take his revenge," he said.

That was in 2004. Today, the Khadrs have changed their tune. In their small apartment in Toronto, they no longer speak about Omar taking revenge.

His mother says she just wants him to come home. "I pray that he’s just, I see him alive standing in front of me," Maha Khadr tells Simon. "I don’t want him to be brought back in a plastic bag. Terrifies me very much."

Sickening insight into the twisted minds of true delusional and twisted cultist cretins. And the 2nd and 3rd class citizen wives go right along with it.

God save and protect us from these savages.

Sound like a hero to CBS. Is that because he is a terrorist?
or because he murdered Americans?

Nope. Didn't some 13-year-old kid blow himself up in Iran and became like a national hero or whatever? Sorry Omar, you have not achieved the record of being the world's youngest terrorist. Gee, how terrible /s

What a deranged religion....blowing yourself up is considered something to be proud of and honored for. Sheesh.

Reminds me of the Hitler jugend in WW2. Most Hitler Youth would fleed, but some were fanatical and had to be killed. This kid deserves no pity.

They must’ve forgotten about Charles Bishop/Bishra, the Tampa teen terorrist who stole and crashed a plane into a bank and had a supressed suicide note praising Bin Laden.

Don't blame the children, blame the parents, schools, mosques, etc? But don't fire upon such a deadly child or investigate such tv broadcasts, childrens' textbooks, or mosques, right Viacommies?

“Son of Al Queda”
http://www.pbs.org/wgbh/pages/frontline/shows/khadr/
for “VOA” the most chilling scene came at the end of the show...
an interview with some of Khadr’s female relatives...
clothed in their black robes from head-to-toes with the one little opening
for their eyes.
And still hard-core for Jihad.
It gives one pause about the effectiveness of a strategy of just killing
Jihadis...and not “neutralizing” more of the Jihadi-incubators.
(fortunately, that sort of strategizing is “above my paygrade”)

I'm pretty sure I heard about this terrorist when he was first captured in Afghanistan. (I used to listen to Radio Canada on shortwave).

His whole family is a bunch of terrorists.

I think his brother and father have both been killed after be given a second chance in Canada.

His father was wanted in a couple of Arab countries for terrorism, and I can't remember where his brother was killed, probably Afghanistan siding with terrorists.

9 posted on 11/19/2007 3:02:21 PM PST by Calvin Locke
[ Post Reply | Private Reply | To 4 | View Replies]
To: STARWISE
His lawyers say that due to his age when he was taken prisoner, he should have been considered a child soldier and shouldn't be there at all.

No, he should have been summarily executed.

Watch the video .. the youngest son who was trapped with his father (who was thankfully killed) as terrorists, shot in the back and paralyzed becomes nearly trance-like with reverence at the thought of 72 indescribably beautiful virgins awaiting him .. and says Omar will get out and get his revenge.

These people are truly demented.

I watched this report Sunday night. They kept making a big deal of how the Littlest Terrorist was “only” 15 when captured. That was five years ago. Now he’s 20. he’s not a widdle kid anymore. Nobody pointed that out.

Chilling ... I’d like to see all the islamic
islamic schools and mosques in the US
investigated and shut down, if they’re
proselytizing jihad .. for one.

He’s sorry he didn’t die that day, but he doesn’t have the courage to kill himself.

I don't believe Omar Khadr has been kept in a cage for five years. If he did murder an American soldier, he belongs in confinement. Color me unsympathetic.

Sorry, he said, because he was denied the opportunity of getting to paradise, where 72 stunning virgins would await him.

Most teenagers looking for sex either manage to find it or muddle through without it, all without becoming terrorists.

17 posted on 11/19/2007 3:26:42 PM PST by Charlespg (Peace= When we trod the ruins of Mecca and Medina under our infidel boots.)
[ Post Reply | Private Reply | To 1 | View Replies]
To: STARWISE
I thought the Canadians were demented for wanting him back so badly. But I'm pretty sure that was arranged under Chretien.
(Could have been Martin)

You would think HealthCanada had enough problems without this guy burdening the taxpayers. It was like he was just a tourist in a foreign country or anything...

Why is this such a controversary? Who cares how young he is, he committed acts of terrorism—that means execution, no matter HOW old you are. Simply being a kid doesn’t excuse you from getting the punishment you deserve for your crime. Why should we let someone get off the hook just cuz they’re younger, and let them roam free and continue more terrorist acts as they get older? Enough of this “oh but he’s just a kid” attitude. He’s a TERRORIST!