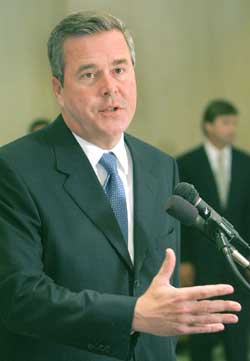 brain dead??? Strange, that isn’t the Terri we saw and heard!!!!!
God will pass judgement on a land that killsinnocent people and calls it good!

In case you haven’t seen this thread....

The death culture will never give up until everyone on earth has been euthanized.

48 posted on 11/19/2007 6:59:17 PM PST by editor-surveyor (Turning the general election into a second Democrat primary is not a winning strategy.)
[ Post Reply | Private Reply | To 1 | View Replies ]
To: Tlaloc; MizSterious; floriduh voter; amdgmary
As our Terri Dailies note,and I repeat on #363, of that thread,

Visitors: we have chronicled this connection from the start here on the Terri Dailies threads as we saw from the start what others including Fred did not understand back then. We knew the MSM would attach to the Terri Legacy and just not let it go, and the Fred and Terri tar baby dailies were born to record this tie as it repeated most every day since.