Ok. You were doing good until you hit this line...

“On the other hand, isn’t it convieniant to create a crises whereby the government is granted greater authority?”

What do you mean by ‘create a crisis’?

Are you eluding that our government is somehow responsible for 9/11?

Well Jim .. if you did that .. I would no longer support this thread.

And .. I continue to support this thread because your conservative principles are the same as mine.

The real problem might be whether people would vote for a NY liberal - against another NY liberal. If push comes to shove and we unfortunately end up with Rudy as our nominee (I’m praying that does not happen), how many people will stay home and not vote AND ALLOW HILLARY TO BECOME PRESIDENT ..??

Will I allow the Clintons back in the WH by refusing to vote for Rudy ..??

I am not supporting Rudy, nor am I sending him money. I’m really supporting Duncan Hunter - and I will also support Fred Thompson if he gets in the race (which is looking more and more probable).

If Rudy turns against the tide and supports the illegals - I don’t think he can get the nomination.

You meant to say “accepting”, I think.

And the answer to your question is no. My point about the Republican party encouraging independent thought is we don’t expect our Congressional representatives to march in lockstep the way the Democrats do.

This has been widely discussed and reported on by Congressional historians.

And my point was, it’s interesting the party encourages independent thought but this web site seems to discourage it.

“McCain really messed up with his song about bombing Iran!”

I thought it was one of his better moments. LOL

Interesting analysis. One more reason to vote my conscience.

Here’s another: If we end up with Hillary, at least we can look forward to JimRob declaring open season on RINOs.

http://www.freerepublic.com/focus/f-news/1785129/posts?page=156#156
To: PhiKapMom
If the Republican party writes off the pro life, pro liberty, pro gun planks, well, let’s just say it will lose a great deal of respect, and I’m predicting a great deal of support. I can just about guarantee you that Free Republic will become much more anti RINO, anti liberal, anti big government than it’s ever been. If we are left with no conservative leadership and no conservative majority to worry about maintaining, then I think it’ll be open season on all RINOs from the top down and there will be a complete overhaul in the works.

748 posted on 04/21/2007 9:45:39 PM PDT by Kevmo (Duncan Hunter just needs one Rudy G Campaign Video: http://www.youtube.com/watch?v=RVBtPIrEleM)
[ Post Reply | Private Reply | To 557 | View Replies]
To: Peach
I don’t mean to be flip, but I’ll give it serious thought the second freepers make serious posts about why we should consider social issues more important than national security and fiscal restraint issues.

Suffice it to say all the charges you've made here tonight concerning those who's values you distain apply just as well to you & your friends. Difference is you don't own the site. Too bad.

And that is relevant why? Do you think Rudy will become pro-life if we just vote him president? Or do you think being pro-abortion is OK because Reagan voted for a bill once?

What is your point?

The nature of the compromises Rudy would have to make to govern effectively (not constitutionally) would be an effective back stab.

A welfare plantation for illegal invaders? 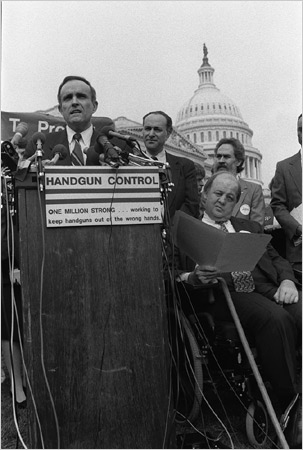 I laughed out loud when I heard that, but knowing how overly wheenie people are in the general public, it won’t go over big.

754 posted on 04/21/2007 9:47:05 PM PDT by Peach
[ Post Reply | Private Reply | To 747 | View Replies]
To: veronica
Since you asked I looked it up. It is a series of forums sponsored by the G.H.W. Bush Presidential Library and G.H.W hosts the events. He and Barbara were in attendence and lauded by Romney during his speech.

So, as I suspected, the introduction means nothing.

I think you meant disdain.

And you didn’t get the point which doesn’t surprise me at all. I doubt it surprises anyone reading here tonight. You have a great evening.

I never thought about the order of those three things until Bush became President. I didn't have to. There used to be enough difference in Democrats and Republicans that the line drawn was clear and wide.

That line has changed over the years, with the Democratic party making such a strong left turn that now it should be called the socialist party with all their Progressive politican's agenda to destroy everything about America we know and have loved.

This is only my opinion but I have been thinking this for a long time.

The sad and shocking and heart breaking thing is the Republican party has been collecting the left as party members like there is no tomorrow. Where were the left, the Democrats to go that had gotten fed up with their Democrat party turning into socialists galore. They signed up as Republicans, and many have run on the Republican ticket. Some even being put in high positions in the GOP and RNC making it even harder to have the Republican party stay strongly Conservative and work for those running that were Conservative. Instead the GOP and RNC have backed these Rhino's to our dismay and to America's destruction.

Rudy is NOT a Conservative, Bush was/is not a Conservative and we knew that in Bush's first election. We also knew how he felt about illegals and did he change his mind? NOPE, he pushed his illegal alien agenda from day one of his first term and continues. So Rudy is not going to change either and to say he will is stupid.

I have been shocked at what I have seen at FR where so many are for Rudy and bash those that want a true Conservarive. I came here not long ago after watching this place for awhile and reading over and over how FR came about way before my time here. Did that get lost some place? I don't think so, it is just that a lot of people seem to have the mindset of the "anything but" a Dem is OK.

In voting that way we as Conservatives are not letting the GOP and RNC know we have had enough of the Rhino's. Yes it will possiblly mean a Dem will win but how much difference is there in a Dem and a Rhino. In some cases not much, in others a bigger difference.

I resent that we even have to question any of this. I prefer a clean line drawn and our side to be strong and every Republican a true Conservative. But more and more lately I am meeting online and in person Republicans that are not Conservative and it is making me sick very concerned in the direction that America is going when our side is filled with this virus. I never caved in to pier pressure in my life and I am not going to start now. I have always voted, but if my own party has left me and I do mean left me. I am not going to change my character and what I want for America......to appease those with less character and with a liberal agenda just to say it is ok to vote for a Rhino it is better then an Obama or a Hillary.

I demand a Conservative to vote for.What has happened to the men that crossed our country in covered wagons, the courage of men and women to fight for what they knew had to be. Why do so many cave in from the pressure of Rhino's? The or else BS and the better of two evils mantra Republicans can lower their standards and stop standing up for what is right vs. what is wrong and stop fighting the evil within, but not I.

You have courage Mr. Robinson, you have fought the good fight, but it is not over yet. Now it seems the fight has grown to the invasion of the Republican party. It is close to home so to speak and it is much harder now because some of our enemy is within our camp.But so is the world we live in. Our enemy is everywhere, in many countries not just one, they wear no real uniform and walk our streets and ride our buses. They lie in wait for all of us to be Rhino's and cave in so that more of their ilk can be in Congress and the Senate ie. Keith Ellison.

We may be fewer then before fighting FOR America but right is on our side. The Founding Fathers must be spinning in their graves to see how easily some cave in to those that would vote for the likes of Rudy or McCain.

Well he was in charge of a police force larger then most countries army's.

He was articulating the Islamist threat way before any pol I can think of. Way before 9/11. That was one of the reasons he kicked out Arafat despite the shrieks of the NYTimes.

His response to 9/11 despite what others say was heroic.

His speech following 9/11 slapping around the UN was fantastic.

Watching those buildings collapse around him and attending all those funerals....he more then any other pol knows the nature of the enemy...he’s qualified.

Do you know how to see which post is being replied to? Well, if you click on my post again and see which post I’m replying to, you can see that I was answering a question.