There has been some recent controversy about Barack Obama's religious background. Mr. Obama has recently issued statements through his spokesmen in the media (i.e., reporters) which express his shock at being questioned about such things.

Most of his media spokesmen (i.e., reporters) have then gone on to cite his membership in Chicago's Trinity United Church Of Christ parish as proof that he is just a regular run of the mill American Christian.

But a visit to the Trinity Church's website proves that it is not your everyday Christian parish:

We are a congregation which is Unashamedly Black and Unapologetically Christian... Our roots in the Black religious experience and tradition are deep, lasting and permanent. We are an African people, and remain "true to our native land," the mother continent, the cradle of civilization. God has superintended our pilgrimage through the days of slavery, the days of segregation, and the long night of racism. It is God who gives us the strength and courage to continuously address injustice as a people, and as a congregation. We constantly affirm our trust in God through cultural expression of a Black worship service and ministries which address the Black Community.

Trinity United Church of Christ adopted the Black Value System written by the Manford Byrd Recognition Committee chaired by Vallmer Jordan in 1981. We believe in the following 12 precepts and covenantal statements. These Black Ethics must be taught and exemplified in homes, churches, nurseries and schools, wherever Blacks are gathered. They must reflect on the following concepts:

The Pastor as well as the membership of Trinity United Church of Christ is committed to a 10-point Vision:

A visit to the church's bookstore shows they have been true to their word. It is full of (bogus) Afrocentric books, many of  which make the usual preposterous Afrocentric claims, such as that Cleopatra was black:

But Trinity Church's proselytizing doesn't stop with re-writing history and promoting its parishioners.

Here is here is the latest sermon from its pastor, Rev. Jeremiah A. Wright, Jr. (pdf file):

Marvin Gaye’s powerful “message song” is a song that made him famous because it went against the “Motown entertainment rule.” It raised serious questions about the culture, the country and governmental policy.

His song raised questions about Black-on-Black violence, about drugs, about war and about the way in which we were living (or not living) in a very difficult period of history.

I use his words today on the third Sunday of a New Year to keep before you the painful truth of who we are and where it is we are in this racist United States of America! What’s goin’ on?

We have lost over 3,000 boys and girls in an illegal and unjust war, and the media is on a feeding frenzy about Barack Obama’s church. Where is the outrage about the 3,000 dead American military personnel and the 600,000 dead Iraqi civilians who are dead for no reason other than greed and ego? What’s goin’ on?

This past Wednesday, January 17th, the House of Representatives deliberated on a bill to cut interest rates on federally subsidized student loans. On Thursday, January 18th, the House of Representatives considered legislation that would repeal some royalties and tax incentives from the oil and gas industries and redistribute that money to alternative and renewable energy such as bio-fuels.

The media, however, is not covering that news. The media wants to know about Barack Obama’s pastor. What’s goin’ on?

On the weekend leading up to Dr. Martin Luther King’s birthday, the House of Representatives passed a bill requiring the United States Secretary of Health and Human Services to negotiate drug prices for the Medicare program. The President who is “staying the course” and sending 1,500 more troops to their death has issued a veto threat against the measure and there is no public outcry and no media outrage. What’s goin’ on?

The President, who is “staying the course” and sending 21,500 more troops to their death has issued a veto threat against the measure and there is no public outcry and no media outrage.

The President’s “New Plan” (more troops, more death and more war) promises an insane escalation — in Iraq, Iran and beyond! With the torture of Abu Ghraib, the complete destructions of cities like Fallujah and over 600,000 deaths due to collateral damage, the President complained in his speech that there had been “too many restrictions” on the actions of the United States Forces in the Iraq war.

The President’s “New Plan” (more troops, more death and more war) promises an insane escalation — in Iraq, Iran and beyond!

Am I the only one who heard that? What’s goin’ on?

I celebrate forty years of ordained ministry this weekend. I bask in the 40-year glow of God’s Grace, God’s forgiveness and God’s lessons about humility.

The e-mails that I have been getting this week, the news clippings that I am being sent and the racist blogs that are flooding the Internet make me know, however, that even as I bask, the work ahead for the church of Jesus Christ is just as serious and difficult today (if not more so) as it was forty years ago when I was ordained during the Vietnamese War!

The President tries to frame the justification for his insanity by using language describing the debate in this country over the war as “a great struggle between those who believe in freedom in moderation and extremists who kill the innocent.”

The reality, however, is that the entire war in Iraq and the larger “war on terror” have been based on lies, half-truths and distortions to serve the agenda of the United States imperialism. Where is the public outcry? Where is the outrage? What’s goin’ on?

There is more focus on what the Bears may or may not do as they play a football game against New Orleans than there is on the 3,000 homeless who are still living or displaced in the real life game called “New Orleans.”

Those poor Black and white displaced citizens of New Orleans (not imported team members playing for New Orleans), who have no place to go and no place to live because of this administration’s illegal war and its billions of dollars wasted on prosecuting that war, join with me in asking, “What’s goin’ on?”

Excuse me! The victims of Hurricane Katrina are no longer on the radar screen of the media. Only Barack, his church, his pastor and white arrogance!

I invite your sincere prayers this weekend. The generation of ministers behind me has its work cut out for them in some incredible and overwhelming ways!

So much for the separation of church and state.

Speaking of which, here is what is being promoted at the top of the church's home page as we speak:

On Sunday, January 28th, immediately following the 11:00 a.m. worship service, meet Senator Barack Obama, author of the best-selling book, Audacity of Hope. Purchase your copy of Audacity of Hope in the Akiba Bookstore and have it personally signed by Senator Obama. You do not want to miss this monumental experience!

Where is the ACLU?

Is that describing his religion, his politics, or both?

The United Church of Christ has affirmed and re-affirmed since 1971 that access to safe and legal abortion is consistent with a woman’s right to follow the dictates of her own faith and beliefs in determining when and if she should have children, and has supported comprehensive sexuality education as one measure to prevent unwanted or unplanned pregnancies. (General Synods VIII, IX, XI, XII, XIII, XVI, XVII, and XVIII)

Nice bunch of Christians over there...

I tried years ago to go to some of the "mainstream" Protestant churchs in my community. No, not the level of politics in this letter but I was simply looking for a good homily on Jesus and the Bible. I knew that Catholic homilies were less than stellar. I discovered that the homilies in these churchs were no longer about Jesus or the Bible. In fact, I went to a Methodist service at Easter one year to be with my mother in law. Not one mention of the Resurrection or Our Lord. Wow.

Then what are they doing in this country? If they remain true to their native land then they should be making plans for going back and staying there.

By the looks of the schools, crime, and housing of the "black community" in this co, I would say all this liberal black power preening for the last decades have failed in the big cities.

Can't tell you how surprised I'm not.

11 posted on 01/25/2007 10:04:13 AM PST by workerbee (Ladies do not start fights, but they can finish them.)
[ Post Reply | Private Reply | To 1 | View Replies]
To: Mercat
"I discovered that the homilies in these churchs were no longer about Jesus or the Bible. In fact, I went to a Methodist service at Easter one year to be with my mother in law. Not one mention of the Resurrection or Our Lord. Wow."

Note the above "sermon" only mentions Jesus' name once and not in a religious or biblical context. Seems fixed on the world rather than the Holy Spirit.

"We are an African people, and remain "true to our native land," the mother continent, the cradle of civilization."


If they are true to their native Africa and not the US then I must assume that they are foreigners. Wouldn't they be more happy in "the cradle of civilization"?

They show the worship service from Trinity on one of the local channels in Chicago, and I watched it a while back. I just caught most of the sermon, and it was pretty much straight politics with a veneer of religion.

So if Congress decides to put further restraints on the political involvement of churches, this one had better be at the top of their list. This one may have gone past current restraints, for all I know.

I am not for restraints, unless a church is so politically active that it's de facto a political organization, but on Sundays I like to take a break from politics. The Lord's Day, you know.

But not to worry. At least Osamabama didn't spend his formative years in an ACTUAL terrorist madrassa.

President Bush has been villified for
being Christian.

Barack Hussein Obama is a radical hating African who
is being applauded by the pop culture.

18 posted on 01/25/2007 10:08:24 AM PST by ArrogantBustard (Western Civilisation is aborting, buggering, and contracepting itself out of existence.)
[ Post Reply | Private Reply | To 1 | View Replies]
To: frogjerk
So? Look, so Obama's church is filled with Black Liberal Democrats who don't like Bush.

You go to Obama's Church and you're going to find people who dislike Bush?

This looks like another job for our old friend.... 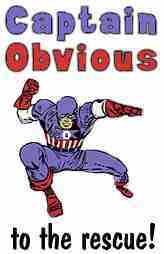 Jesus! Do you realize how many of the Mainline Churches, between the Guitar Masses, the Liberation Theology, and the denial of the Divinity of Christ, are starting to find empty pews as the norm? Makes me want to go Roman Catholic.