[Innocent Syrian]Fruit pickers killed in [Israeli] raid buried (US gets part of the blame)
News.Com.AU ^ | August 06, 2006 | By Khaled Yacoub Oweis in Damascus

TWENTY THREE Syrians, killed by an Israeli raid on Lebanon, were buried overnight as the Syrian government sent a formal protest to the United Nations over what one minister called "a fascist massacre".

An Israeli air raid on a farm near the village of Qaa in Lebanon's Bekaa Valley on Friday killed at least 33 farm workers while they were picking peaches. Most of the dead were Syrian Kurds from poor villages in northern Syria.

Draped in Syrian flags, 23 people, including six woman, were buried side by side in the village of Jandareez near the border with Turkey on the orders of Syrian President Bashar al-Assad, who called those killed "martyrs".

Three other workers who where killed in the Israeli raid were buried elsewhere in Syria.

The Syrian Foreign Ministry sent identical letters of protest on Saturday to the U.N. Security Council and to Secretary-General Kofi Annan.

"The failure of the Security Council to stop Israel's state terrorism and its war crimes against Lebanon is organised annihilation of the U.N. charter and international law," the letter said.

"These people were trying to earn their daily living. Israeli aggression is a threat to the region and to world peace," the minister said.

An Israeli army spokesman said the raid targeted two buildings that military intelligence information had showed were used by Hezbollah to store weapons.

But footage aired on Lebanese and Arab television showed bodies of what appeared to be farm workers lined up near the ruins of a small structure in fruit groves. Strewn nearby were baskets used to hold fruit.

The death toll in Qaa is one of the highest in a single strike since the Israeli onslaught on Lebanon began on July 12.

The deadliest strike occurred last week in the village of Qana. The Lebanese government says that airstrike killed up to 54 civilians. Human Rights Watch puts the death toll at least 28 with 13 missing.

"Syria supports holding an inquiry into the Qana massacre and to expand it to al-Qaa," the Foreign Ministry letter said, adding that Israel must pay compensation for its "massacres" and destruction of Lebanese infrastructure.

Hey Syria, why don't you try and DO something about it?

Quite hiding being your proxy terrorist stoodges.

Are these the same "farm workers"? Were the loading trucks or picking peaches? There is a difference, I think, even when Arabs do it.

---Israeli warplanes attacked four bridges in largely Christian areas north of Beirut on Friday and hit a farm in the Bekaa Valley near the Syrian border, killing 33 workers who were loading fruit onto trucks.---

Looks like they have the same problem with produce pickers who ignore borders as we do.

Or is this the real story?

---Ali Yaghi, a Lebanese civil defense official at the scene, said at least 23 people were killed.

The Israeli army said it had attacked two buildings where it suspected weapons were being stored, and it was checking reports that it had hit a vegetable storehouse and civilians.

Yaghi said at least 11 workers were wounded and some likely were buried under rubble. A bulldozer was brought to the site to try to uncover survivors, he said.---

The Moozies think you're stupid. There is no reason to believe they were "innocents."

7 posted on 08/06/2006 7:12:51 AM PDT by NonValueAdded (Tom Gallagher, the anti-Crist [FL 2006 Governor race])
[ Post Reply | Private Reply | To 3 | View Replies]
To: yankeedame
An Israeli air raid on a farm near the village of Qaa in Lebanon's Bekaa Valley on Friday killed at least 33 farm workers while they were picking peaches

Depends on what the meaning of "peaches" is. 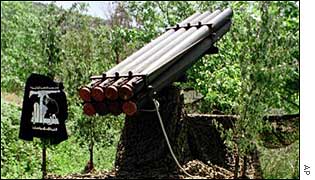 I was watching a newsclip on Fox News this a.m. that was supposed to be the funeral procession in Syria of these farm workers killed in Lebanon...

People were hauling these caskets and were surrounded by what was claimed to be thousands of mourners...

The camera shot came from an elevated position looking down onto the crowd...

The lids on these wooden caskets must be loose since one of the lids had slipped back and you could see into one end of that casket...

I'd say the casket was empty...

Just an observation to ponder...

--- Ali Yaghi, a Lebanese civil defense official at the scene, said at least 28 people were killed.
The Israeli army said it had attacked two buildings where it suspected weapons were being stored, and it was checking reports that it had hit a vegetable storehouse and civilians.---

--- The attack occurred when five Syrian refrigerator trucks arrived at a vegetable warehouse to load peaches and apples for the Syrian market, drivers and witnesses said. They said there were about 150 people there at the time.
Yaghi said civilian pickup trucks and a Lebanese ambulance hauled the laborers, some killed by shrapnel or flying rocks, to the Syrian city of Homs. Roads to hospitals in Lebanon were cut off by Israeli airstrikes earlier in the day.
The attack occurred near the town of al-Qaa, about six miles from Hermel, a Hezbollah stronghold hit by at least three Israeli airstrikes since fighting began 24 days ago.
The site run by a Lebanese company employed some 60 workers. It was unclear how many were there at the time of the attack.---

Picking fruit in the middle of a war zone? Nonsense.

If there are any pictures of the bombed "parking lot" or whatever it was, I still haven't seen them. Just ain't the same photographic interest when there are no children's bodies to parade around. Plus I'll bet a picture would show that it's built over some kind of structure / bunker.

I bet they were picking fruit for the baby food factory.

"Syrian Fruit pickers"?
Hah Hah!
Doing the fruit picking that the Lebanese won't do I take it?
And these "fruit pickers" wouldn't by chance have anything to do with resupplying Hizbullah with fresh new weapons, no?
14 posted on 08/06/2006 7:38:50 AM PDT by Jameison
[ Post Reply | Private Reply | To 1 | View Replies]
To: Jameison

I thought they "all are hezoballa"

Where do the American and Jew hating journalists and other "piss headed" world renowned "writers" come up with all this B.S. and "nary" a word about the other side of the commode they reside in and report from?

well, I know some Sudanese Christian refugees who worked in Syria picking crops before finally coming here...they have told me of the horrors many times. The UNHCR sent them there to be virtual slaves for the Syrians.

One more reason the UN should be disbanded.