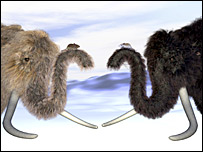 Woolly mammoths had both dark and light coats

The coat colour of mammoths that roamed the Earth thousands of years ago has been determined by scientists.

Some of the curly tusked animals would have sported dark brown coats, while others had pale ginger or blond hair.

The information was extracted from a 43,000-year-old woolly mammoth bone from Siberia using the latest genetic techniques.

Writing in the journal Science, the researchers said a gene called Mc1r was controlling the beasts' coat colours.

This gene is responsible for hair-colour in some modern mammals, too.

In humans, reduced activity of the Mc1r gene causes red hair, while in dogs, mice and horses it results in yellow hair.

Using ancient DNA extracted from the excavated mammoth bone, the international team of researchers were able to look at the variations in copies of the Mc1r gene.

Dr Michael Hofreiter, an author on the paper and an evolutionary biologist from the Max Planck Institute for Evolutionary Anthropology, Germany, said analysis revealed two different versions of the gene were present - a fully active and a partially active version.

The researchers propose that hair coloration in mammoths is likely to have been determined in the same way as in present-day mammals.

This means that mammoths with one copy of the active gene and one of the partially active gene would have had dark coats - most likely dark brown or black.

While mammoths with two copies of the inactive gene would have had paler coats - possibly blond or ginger. 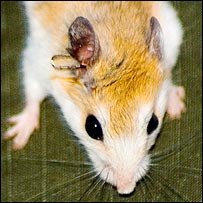 Light-coloured fur camouflages mice on the beaches of Florida

The scientists said they were unsure why different-coloured mammoths existed.

Other research published in the same journal found that beach mice, whose coat colour is also controlled by the Mc1r gene, have varying colours for survival reasons.

The researchers said Florida beach mice were lighter than their mainland cousins because their pale fur helped them to hide from predators in their sand-dune habitat.

But Dr Hofreiter said it was unlikely that mammoths had varied coats for camouflage.

He said: "They were very big - so even a blond mammoth would have been easy to spot."

Woolly mammoths (Mammuthus primigenius) were common about 50,000 years ago, during the late Pleistocene epoch.

They were about the size of an Indian elephant, but with shaggy woolly coats and tusks measuring over 4m long.

They are thought to have died out about 4,500 years ago.

Short-faced Bear, largest that ever lived, I wonder if the mammoth was on the menu?

This link shows a size comparison with grizzly and polar:

Cave Lion (and cave bear, among other things):

Mammoth told me there'd be days like these. [rimshot!] An Inconvenient Truth: about the Ice Age.

Then of course, there's Mr. Snuffleupagus.

By the way, last year I also heard that Siberia once had giant hyenas, and they might have kept people out until they domesticated dogs.

26 posted on 07/07/2006 2:30:17 AM PDT by Berosus ("There is no beauty like Jerusalem, no wealth like Rome, no depravity like Arabia."--the Talmud)
[ Post Reply | Private Reply | To 24 | View Replies]
To: patton
It is no accident that the color of one's skin is inversely proportional to the distance one's ancestors lived from the equator.

You know, I have alot of trouble with the human predation of mammals stuff, and here's why.

We all know that the American indians hunted the buffalo. And we hear the stories about the indians being very economical and using every piece of the buffalo they could get. These legends have been elevated to an almost holy status.

The buffalo were not threatened until two things arrived in North America.


So no doubt early man hunted mammoth. But I'm inclinedto think that coming home with a mammoth on the hood of their car was a pretty darn rare event.

There is an exception to every rule.

I had never heard of the selknam, so looked them up. The articles on the Inet say that they lived pretty far away from the Equator.

31 posted on 07/07/2006 6:59:09 AM PDT by dsc
[ Post Reply | Private Reply | To 27 | View Replies]
To: MineralMan
There is another instance of a mammoth being reported. In the 1800's a sketch artist/painter was traveling through the Rocky Mountains, saw and drew an elephant with long hair. He supposedly had never been to a carnival, or seen an elephant, and was considered an extremely reliable and believable person. I found a reference to this in a subsection of a Louis La'More (spelling?lol) book, researched it and found it to be a valid story. I would be very interested if anyone out there finds out anything more on this.

Wouldn't it be cool to be the archaeologist digging on a Native American campground and discover an ivory tusk in perfect condition? On that note, I have a friend that has a site on his property in Central Texas that has found ivory utensils, and they are barely calcified. He's also found parts of Spanish armor, and other oddities that don't belong anywhere around there.
32 posted on 07/07/2006 7:01:48 AM PDT by DavemeisterP (It's never too late to be what you might have been....George Elliot)
[ Post Reply | Private Reply | To 13 | View Replies]
To: DavemeisterP

"On that note, I have a friend that has a site on his property in Central Texas that has found ivory utensils, and they are barely calcified. He's also found parts of Spanish armor, and other oddities that don't belong anywhere around there.
"


Ivory objects aren't that scarce. It was a popular material and widely traded among native american tribes. As for the Spanish armor, you may recall that the Spanish were in Texas, so that, too, isn't all that unusual.

Red hair, pink hair, blue hair -- any time you start seeing large, hairy elephants in holes in the ground, it's time to knock off the vodka. ;')

That or maybe Algore's personality.

"the color of one's skin is inversely proportional to the distance...from the equator."

Your right, it is no accident. Vitamin D is created in the oils on the skin and absorbed into the body where it is essential for bone formation, and perhaps antidepressive effects. Women deficient in Vitamin E form norrow pelvic girdles, which make childbirth difficult. A person suffering from Rickets (Vitamin D deficiency) will have thick wrists and a bulging skull. Thus the entusiasm for blond women and graceful wrists. This mutation away from the heavy melanism of the tropics probably made it possible for homo sapiens to migrate into ice age Europe, and sucessfully bear young.