Here is what Discover The Networks has to say about the Center For International Policy: 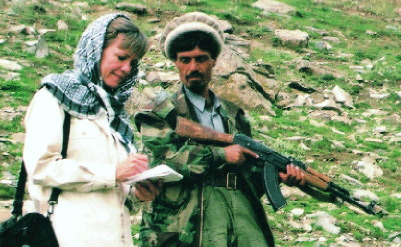 One of the most sophisticated of Fenton’s anti-war projects is the co-mingling of Win Without War and the Center for International Policy (CIP).

Before 9/11, CIP, a Fenton Communications client, mainly acted as Fidel Castro’s greatest “think tank” ally. Much of its million-dollar budget was spent lobbying to end economic sanctions and travel restrictions against Cuba.

Now, it has another mission. Fenton has established a “war room” with CIP called The Iraq Policy Information Program (IPIP). Its main job is getting the anti-Bush foreign policy message out to the media and providing guests for talk shows. A featured speaker of the IPIP is former ambassador Joe Wilson, one of the Bush administration’s most vocal enemies.

Like Moveon.org and Win Without War, the contact for the Iraq Policy Information Program is Fenton Communications. Win Without War also collects tax-deductible donations through CIP.

So Dana Priest's husband runs an operation that gets Joe Wilson speaking gigs.

LOVE IT!! Is Dana's BEST friend by any chance either Mary McCarthy or better yet VALERIE PLAME?? Incestuous bunch of traitors. Maybe they will ALL HANG TOGETHER...LITERALLY!

Gadzooks, Sam Hill! What a find!! Of course some will try to dismiss the significance by saying total strangers can appear on a panel together, but in this case it is a CIP-sponsored event, and the fact that Dana Priest's husband Wm. Goodfeces saw fit to bring his wife together on this panel with the likes of Joe Wilson and Mel Goodman is MOST interesting.......... and let's remember the May 3, 2003 meeting of the "Senate Democratic Policy Council" that brought Joe Wilson together with Nick Kristof...... wish we could trace all of the nefarious dealings that go on behind the scenes among journalists and the likes of Wilson, et al. As it is, we're mainly limited to collecting the public points of contact and public statements and then trying to "connect the dots".......

46 posted on 04/22/2006 8:38:29 PM PDT by pawdoggie
[ Post Reply | Private Reply | To 36 | View Replies]
To: Sam Hill; Howlin; STARWISE; Enchante; piasa; the Real fifi; Blurblogger; Interesting Times
Nice work. Haven't seen it mentioned yet (still catching up on today's threads and if I'm repeating something bear with me), so for reference's sake I'll add that the Center for International Policy was a spinoff of the Fund for Peace (Soviet/CPUSA moneylaundering conduit tied to the Institute for Policy Studies network) that was cofounded in 1975 by Lindsay Mattison and Orlando Letelier, an agent with links to Cuban and East German intelligence. Letelier was CIP's director when William Goodfellow (a Pol Pot apologist mentioned above in the thread) was deputy director. CIP's staff/advisors have included Anthony Lake (who temporarily replaced John Deutch as CIA Director and was in turn replaced by Sandy Berger at the Clinton NSC during the coverup of Chinagate and Deutch's mishandling of classified information (see discussion at Post 35 and following http://www.freerepublic.com/focus/f-news/1604664/posts); and D. Gareth Porter (aka Gary Porter, another Pol Pot apologist who worked for a North Vietnamese news bureau before becoming legislative aide to newly-elected Senator John Kerry in the early 80s), among others. These folks were actively involved in helping Kerry's support of the Sandinistas in the 1980s and are mentioned in various literature on that topic.
47 posted on 04/22/2006 8:53:14 PM PDT by Fedora
[ Post Reply | Private Reply | To 1 | View Replies]
To: Sam Hill

It is part of the incestuous media. They are married and/or related to one another like some inbred tribe.

I'm past words, too.

What d'ya bet this b!tch (Dana Priest) starts making the rounds on Meet The Press and CNN? Standby while the MSM makes the fired CIA leaker (Mary McCarthy) a national hero or, as they'll describe her, a true patriot.

51 posted on 04/22/2006 9:13:49 PM PDT by blake6900 (YOUR AD HERE)
[ Post Reply | Private Reply | To 1 | View Replies]
To: Fedora
Goodfellow also led the effort against Otto Reich's nomination for assistant secretary of state for Western Hemisphere affairs and this is coming from a Dem organ, American Prospect.

"The fight against Reich, who's been nominated for assistant secretary of state for Western Hemisphere affairs, is being led by Bill Goodfellow and the Center for International Policy (www.ciponline.org/reich/index.htm)."

"Goodfellow has been working with the Latin-American-centered groups since early last year, when Reich's name surfaced. The debate has reignited bitter political controversies from the mid-1980s, when Reich was involved in the Iran-contra scandal and other efforts to funnel aid to the contras (whom the Democratic Congress had defunded in reaction to the violence the counterrevolutionaries were inflicting on Nicaragua in their war against the Sandanista government). Intimately entangled with the agenda of the anti-Castro Cuban-exile lobby, Reich is known as an abrasive right-wing ideologue. His appointment is seen largely as a payoff to the hard-line Miami Cubans for helping Bush win Florida. It would also repel many Latin-American leaders and political elites."

Goodfellow soon hired a full-time lobbyist, grass-roots organizer, and media-affairs specialist in an effort to block the appointment. Dipping into a well of materials on Reich's record compiled by the National Security Archive (www.gwu.edu/~nsarchiv), the CIP team directed journalists, editorial writers, and columnists to some of the more questionable highlights of Reich's career.

As a result, most major newspapers have opposed the nomination. CIP's Web site and one set up by the Coalition for a Sensible Latin America Policy (CSLAP) at www.stopottoreich.org have become key resources in the fight. CSLAP's collection of church groups, think tanks, and advocacy organizations includes the CIP, the Cuban Committee for Democracy (www.us.net/cuban), Foreign Policy in Focus (www.fpif.org), and the Washington Office on Latin America (www.wola.org). These groups have been instrumental in rallying grass-roots opposition in key congressional districts.

Thanks for the post, good info on IPIP and CIP.

Leftists agitators are seeded throughout the government and the media. It’s a form of the Trojan horse method, and I believe it has been planned since earlier in the last century. I suspect many currently holding office, and in the drive by media of course. But what these traitors fail to understand is the fact that through their own actions they deprive themselves of that which they most desire:

Hiding one’s true agenda is not a sign of bravery or honor. It shows cowardice and brings shame. Deception is not a mark of intelligence; rather, it demonstrates the need to cheat in order to compensate for lack of intellect.

They all should have been shot long ago; damned bunch of traitors.

The press in this country is punch-drunk and reeling. Their politics are more clear than ever and their 'stock', both literally and figuratively, is at it's lowest point ever. I've always found it curious that whenever you manage to find a poll on people's perception of the media, you'd find that they'd consistently fare far worse than President Bush could ever get. Yet, the press insists that it's doing the average American a favor, because after all, the press is the country's 'voice', despite all contrary evidence.

They've never felt more naked in the public eye. They are having a major problem getting away with this same dismissive arrogance they've never had to honestly defend out in the open. This particular case begs for Joe Wilson to be served and forced to appear before a Federal Judge. There's enough here by now to get this ball rolling.

We've been on defense for far too long against a bunch of broken, scandal-soaked opponents who are begging to be slaughtered. All this cumulative desperation and pending collapse of the 'establishment press' has bared a very rare fruit. We should be grateful and appreciative of this moment in American media history because it's proving us as right as we've ever been about that fraud.

Thanks. That fits the pattern of Goodfellow's associations with various pro-Castro/-Allende/-Sandinista lobbying groups. In Letelier's papers there is a letter from the North American Congress on Latin America (NACLA) praising Goodfellow's work on Chile. The National Security Archive group mentioned in your post, which as mentioned played a role in opposing Reich's nomination, is also tied to NACLA's lobbying network and runs various projects using FOIA to declassify various documents on US policy in Chile and other parts of Latin America. One of the National Security Archive's leading members, Peter Kornbluh, was instrumental in arranging Kerry and Harkin's trip to meet Daniel Ortega. That Washington Office on Latin America (WOLA) group mentioned in your post has a similar background.

Sam - you seem knowledgable about these things ... why do people like Dana and Mary Mapes and Dan Rather not have to be held accountable for their errors and partisan reporting? I'm all for freedom of the press but the press has no oversight except for talented and (thankfully) alert FReepers and other "new media" pajamahadeen. I'd love to hear your thoughts about the state of the media. I'm fascinated by all of it. ;o)

It gets more cozy when you find out that Not only were McCarthy and Joe Wilson working together while assigned to Africa, they are neighbors.