STOCKBRIDGE, Mass.-One of Norman Rockwell's most famous paintings was found hidden behind a fake wall in its owner's home, proving that the version the owner had long displayed was a forgery, family members and experts said.

They believe that the owner, illustrator Donald Trachte Sr., made the copy of "Breaking Home Ties" himself in the early 1970s, deades after he bought it from Rockwell and made it the centerpiece of his art collection.

I don't see anything stupid in hiding the beefroast in the refrigerator where my three hungry hounds can't find it.

A forgery? That makes it sound like he made it to pull a scam. It is a COPY. Big difference.

I brought a Rockwell book into my class of preteens and young teens, and they were fascinated with it.

Some classes are more of a succes than others, and the subjects that catch their attention are always surprising.

I can't decide which Rockwell painting is my favorite, but the one of the boy praying in the restaurant with grandma with red ears has to be in the top ten.

Isn't that Norman Rockwell himself in the painting?

They recently touched up album cover photos of the Beatles by removing the cigarettes form their hands, maybe someone should paint this one out of the original.

***Nothing the Dadaists or Cubists have produced can compare with Rockwell.***

Right! And Rockwell never considered himself an artist. My guess is because the leftist art world didn't approve of his realism in art.

Maybe he considered himself an artist, but not an artiste.

This is one of the very best Rockwell paintings. Maybe Rockwell was an illustrator rather than an artist, but show me the art that is a better reflection of the experience depicted in Rockwell's painting. 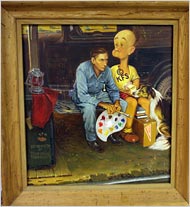 An illustrator is an artist who is also a storyteller.

31 posted on 04/06/2006 4:52:35 PM PDT by LexBaird (Tyrannosaurus Lex, unapologetic carnivore)
[ Post Reply | Private Reply | To 29 | View Replies]
To: KellyAdmirer
Calling it a forgery almost sounds like he was trying to decive someone for finacial gain. Not the case here.

Slightly different cast of characters (the daddy has already moved with the carpetbag to the door) but the son and the faithful dog are the same. Only the clothes have changed . ..

The artsy crowd looked down on "mere illustrators" - that being a person who earned his living by selling his paintings commercially instead of hanging them in galleries and waiting for museums or foundations or rich people to buy them.

Rockwell's easel art is spectacular and shows that he had perfect command of his craft. Another much-despised "illustrator" is N.C. Wyeth, who could paint rings around all his descendants and relations by marriage.

Love the dog. He is comforting the young man, yet cannot take his gaze off of the father.

36 posted on 04/06/2006 8:33:38 PM PDT by Spruce (Keep your mitts off my wallet)
[ Post Reply | Private Reply | To 1 | View Replies]
To: AnAmericanMother
The artsy crowd looked down on "mere illustrators" - that being a person who earned his living by selling his paintings commercially instead of hanging them in galleries and waiting for museums or foundations or rich people to buy them.

Agree. Illustrators produce the defining images of our culture in a way the fine art community has abandoned. People may recognize the name of Mondrian, but they recognize and resonate to the works of Gibson, Flagg, Disney, Shultz, Rockwell, Held Jr., Maxwell, Max, Nast, Frazetta ...

Exactly. I don't see any "intent to defraud" here at all. This is making something out of nothing. The kids might have gotten a big surprise if they tried to sell the copy as the original, though - the old man might have had a wicked sense of humor. I imagine he did it to prove to himself how good a painter he was, able to pull it off for so long.

I'm glad you did that......our younger people and even some middle aged people have no clue to our American culture.....many people don't know who Grandma Moses was ......

It is common to store the original and display a copy. This is done also with costume jewelry.