WASHINGTON (AP) -- Senators writing an immigration bill broke from the House's get-tough approach by refusing Monday to make criminals of humanitarian groups or individuals who help illegal immigrants with more than emergency assistance.

Catholic clergy, immigrants and other groups rallied over the weekend in Los Angeles and other cities and again Monday at the Capitol against a bill the House passed in December that would make such assistance a felony.

Meanwhile, President Bush used a naturalization ceremony swearing in 30 new citizens from 20 countries to warn critics of his proposal to let some illegal immigrants remain in the United State against stoking anti-immigrant feelings.

"The immigration debate should be conducted in a civil and dignified way," the president said as the Senate prepared to tackle the hot-button election issue of what to do with the nation's estimated 11 million illegal immigrants this week.

The panel adopted an amendment by Sen. Dick Durbin, D-Ill., that would protect humanitarian organizations from prosecution for providing more than simple emergency aid to such immigrants.

"Charitable organizations, like individuals, should be able to provide humanitarian assistance to immigrants without fearing prosecution," Durbin said.

The committee faces a midnight deadline for completing a bill with a version of the "guest worker" program that Bush wants for illegal immigrants. The House rejected that program and Majority Leader Bill Frist has said the Senate will start debating a bill Tuesday without it if the committee fails.

Overhauling the nation's immigration laws "is not going to be easy," Bush said at the naturalization ceremony at Constitution Hall two blocks from the White House.

"No one should claim that immigrants are a burden on our economy because the work and enterprise of immigrants helps sustain our economy," the president said. "We should not give in to pessimism. If we work together I am confident we can meet our duty to fix our immigration system and deliver a bill that protects our people, upholds our laws and makes our people proud."

Since the Sept. 11, 2001, terrorist attacks, calls for tougher border security have dominated debate over the knotty problem of controlling immigration.

But a tough immigration-enforcement bill passed by the House last year has galvanized forces that want worker programs for illegal immigrants already in the country.

"We will not accept enforcement-only approaches," said Cecilia Munoz, vice president of the National Council of La Raza, a Hispanic advocacy group.

Immigration reform advocates rallied Monday at the Capitol, where more than 100 members of wore handcuffs to protest the House bill's criminalization of their aid programs for poor immigrants.

More than 500,000 people rallied in Los Angeles on Saturday, demanding that Congress abandon the House-passed measures that would make being an undocumented immigrant a felony and erect a 700-mile fence along the 2,000-mile U.S.-Mexico border. Similar but smaller protests were held in Dallas, Phoenix, Milwaukee and Columbus, Ohio, among other cities.

New Mexico Gov. Bill Richardson, a Democrat, said Monday it would be unrealistic to round up and deport the estimated 11 million illegal immigrants in the U.S. Instead, he told CBS' "The Early Show," the United States should create a "path toward legalization" based on whether the immigrants are law abiding, pay takes, are learning English or demonstrate other "positive behavior."

Senators up for re-election this year are being forced by the debate to juggle the demand from voters for tighter borders to keep out terrorists and businesses who look to the tide of immigrants to help fill jobs.

Employers and immigration advocates prefer a bill drafted by Sens. John McCain, R-Ariz., and Edward M. Kennedy, D-Mass., that would allow illegal immigrants to become eligible for permanent residency after working for six years. Both McCain and Frist are likely candidates for the Republican presidential nomination next year.

Another approach offered by Sen. John Cornyn, R-Texas, and Jon Kyl, R-Ariz., would let illegal immigrants get temporary work permits for up to five years. They would have to leave the United States but could then apply for legal re-entry.

Specter and Leahy,, The brain trust of the Senate Judiciary Committee.

Our nation's fate may well be in these fellas hands.


Not a comforting thought, eh?

It could be worse. Right now it is Specter/Leahy. It could be Leahy/Specter.

3 posted on 03/27/2006 9:17:48 AM PST by staytrue
[ Post Reply | Private Reply | To 2 | View Replies]
To: NormsRevenge
'that would protect humanitarian organizations from prosecution for providing more than simple emergency aid to such immigrants.'

George W had an incredible opportunity right after September 11th to mobilize our national guard troops on the Border to stop the influx of illegals (and terrorists) in the name of Homeland Security. There would have been little debate or outcry by the Left in the days after September 11th had he done what should have rightfully been done to protect Americans. What a wasted opportunity!!

I'm doubtful that this Bill or any meaningful immigration legislation will be hammered out during the remainder of his presidency. 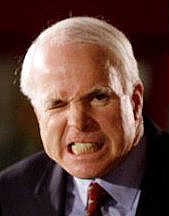 QUISLING: a synonym for traitor, someone who collaborates with the invaders of his country.

Senate caves to illegal immigration is more like it.

"It could be worse. Right now it is Specter/Leahy. It could be Leahy/Specter."


And just how would that be different? It appears the committee is being run by Spector/kennedy/feinstein/leahy.

I just e-mailed AND wrote both OH Senators to oppose the senate bills and favor the Sensenbrenner bill. Got the standard boiler plate from DeWine, but it DOES indicate that he is answering mail on this and shows how serious they are feeling the heat.

12 posted on 03/27/2006 9:22:47 AM PST by antceecee (...some people would complain if you hung 'em with a new rope...)
[ Post Reply | Private Reply | To 1 | View Replies]
To: NormsRevenge
Overhauling the nation's immigration laws "is not going to be easy," Bush said at the naturalization ceremony at Constitution Hall two blocks from the White House.

Is that a threat or a promise Mr. President?

13 posted on 03/27/2006 9:23:32 AM PST by joesnuffy
[ Post Reply | Private Reply | To 1 | View Replies]
To: NormsRevenge
Overhauling the nation's immigration laws "is not going to be easy," Bush said at the naturalization ceremony at Constitution Hall two blocks from the White House.

Is that a threat or a promise Mr. President?

"We will not accept enforcement-only approaches,"

Illegals get to choose what they will or will not accept?

Gee, that's a great premise to start from, huh?

15 posted on 03/27/2006 9:24:19 AM PST by Pessimist
[ Post Reply | Private Reply | To 1 | View Replies]
To: robowombat; NormsRevenge
"No one should claim that immigrants are a burden on our economy because the work and enterprise of immigrants helps sustain our economy," the president said.

This is so WRONG! What percentage of entitlements does he think they consume?!
16 posted on 03/27/2006 9:25:11 AM PST by Froufrou
[ Post Reply | Private Reply | To 4 | View Replies]
To: NormsRevenge
In other words, business as usual. Various groups in our country can still flout our immigration laws. The Senate's idea of national sovereignty is a joke upon the American people.


(Denny Crane: "I Don't Want To Socialize With A Pinko Liberal Democrat Commie. Say What You Like About Republicans. We Stick To Our Convictions. Even When We Know We're Dead Wrong.")

To: staytrue
It could be worse. Right now it is Specter/Leahy. It could be Leahy/Specter.