Here's a riddle: So if it takes Rush Limbaugh a full week to be booted from ESPN for rather nebulous comments – at best – about black quarterbacks in the NFL, how many times can Bryant Gumbel incite direct racially based "playa hatin" before he gets a slap on the wrist?

Sorry, I now recognize that is a rhetorical question with no known answer. But doesn't it just rub somebody wrong somewhere that Gumbel can echo the thoughts of Hitler and someone barely notices, while fellow broadcasters say far less and receive merciless verbal beatings?

What did he say?

Well for starters he implied that Olympic athletes competing for the medals at the Winter Games shouldn't truly be considered great because not enough of them are black.

So try not to laugh when someone says
these are the world's greatest athletes,
despite a paucity of blacks that makes
the Winter Games look like a GOP convention.
– Bryant Gumbel, HBO's Real Sports, Feb. 7, 2006.

But didn't the former Nazi supreme commander used to think of black athletes as superior as well? At least in physical prowess? Sure, he believed they were subhuman, but in reality, he feared a black man's athletic abilities.

Now Gumbel draws a comparison to athletes of other races and assumes, speculates and advances the argument that blacks are in fact superior athletes. Of course, its complete idiocy – but don't tell Emperor Gumbel.

Not that American blacks are drawn to winter sports necessarily, nor do they have to be, nor should they be. The wonderful thing about American culture is that we pretty much get to decide growing up if we would rather kick a soccer ball, throw a football, hit a baseball, or fly through the air on a snowboard – it's up to us. Tim Meadows' old skit on "Saturday Night Live" illustrated this well when he portrayed the lone black man in America who had to have his African-American hockey fix.

Of course, Gumbel's comment was a two-sided jab. And while he attempted to make humor about how much he personally – as a tolerant black man – has no tolerance for "whitey's games," the real backhand is the jab he took at conservatives. Gumbel again fell prey to a classic fallacy – about which liberal black elites are in harsh denial.

More blacks are associating with conservatives now than at any time in history since the end of the American Civil War. (At that time, blacks consistently voted Republican until the Democrats founded the KKK and intimidated them into a voting block used for the Democrats' purposes.)

Gumbel may not speak to average blacks very often from his ebony tower, as he looks down his nose upon the rest of the world. But I do. In New York City, my radio talk-show's audience is roughly 60 percent African American, with numbers of friends telling friends every day.

Gumbel may grumble about the percentage of blacks playing sports at the Winter Games, but what he should be concerned about is why seven out of 10 pregnancies in the black community occur in illegitimacy. And why a higher percentage of those end in abortion than all other ethnicities combined. Maybe Gumbel could explain the effect Planned Parenthood has had on the depletion of the African-American community through its strategic targeting of black neighborhoods. Maybe Gumbel could offer an explanation on why, in doing so, the black population in America is in actual decline. Maybe he could, but I doubt he will.

Of course, Gumbel is not alone. His accomplices in the media cover for him and every other liberal foible because it's not a mistake if a liberal does it. Meanwhile, if Rush Limbaugh makes an observation about black quarterbacks, he's verbally executed for it – in a community that supposedly opposes capital punishment.

And while we're at it, I wonder if Gumbel views the U.S. troops who fight for our freedoms with the same amount of disdain as he does the U.S. Olympic team? After all, both groups are fighting for the qualities and values Americans believe in.

Then again, we wouldn't want to tax Gumbel's paucity of thought on the matter.

(And stay tuned next week when Gumbel unveils his new "Olympic Affirmative Action" plan for desegregating the sport of curling.) 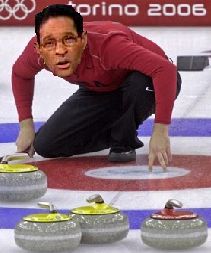 "Now Gumbel draws a comparison to athletes of other races and assumes, speculates and advances the argument that blacks are in fact superior athletes"

The biggest issue here is NOT the "looks like a GOP convention", tho that may be offensive to us GOPers.

The big issue is the FIRST part of the statement - directly implying that they can't be the "greatest" athletes if there are no blacks amongst them.

Yet EVERYONE is focused on the *GOP* part of the sentence and calling *that* racist! Yes, I include conservative show hosts.

It's time the "greatest" part of the sentence got the attention. THAT is the true racist part.

No, because he was talking specifically about the WINTER Olympics, for which that would basically be true.

Of course, Gumbel didn't worry about all the orientals in the winter Games.

He's disgusting. Why do Black racists always get off the hook and are never challenged by the MSM?

Greg IS a class act. My wife worked with him in '79-80 when she was an assistant to one of the Newscasters there at NBC in Chicago. She always thought he was a sweetheart.
Of course it was his idiot brother who became "famous". Funny how that stuff always works out.

Maybe, but his larger point seemed to be that Olympica athletes can't be "skilled" unless dey be black.

A friend of mine visited Jamaica a few years ago. When she came back she was telling me about her trip. A man there said something that stuck with her:

She and some friends were sitting with some Jamaicans, and the discussion of being black in America came up. One of the Jamaica's told her that there are no blacks left in America. They've all been genetically mixed for so long that there are simply none left who are, simply "black."

So gumball, how does it feel to hate the "white parts" of yourself?

He not only lamented the paucity of blacks on the US team, when no blacks were discriminated against in its formation (if they had demonstrated talent in those events and had bested white performers they would have been there, but Grumble had to go further and denigrate the ability of the white Olympians. He was classless and racist, far exceeding "racist offenses" that white commentators were cashiered for in the past.

Well, those advantages didn't do them much good against Euro and Latin teams that played like teams.

Elder was all over this days ago. God bless Larry

a real piece of work he is

He isn't a racist...She's only white on the outside. Cute though.

why aren't bryant, jesse, and al over there in Torino boycotting these olympics then?

Is NFL TV bringing Gumball in for Football announcing this year. He should be boycotted!

He is on the commercials with Chris (what's his name, former Bengal receiver) saying they start Thanksgiving weekend.