I hate to say it but I love Howard Dean. Oops, I mean Doctor Howard Dean. We must give him his due, of course. He is exactly what everyone imagined he would be as the DNC chairman; a lose cannon, an out of control demagogue, and slightly loopy to boot.

Yes it is horrible to lose a single soldier but here is a little bit of perspective:

Between the years 1980 and 2004 we lost nearly an average of 1,000 soldiers each year killed in accidents, from illness, and from other causes. By comparison, in Iraq, an actual war, we have lost less than half of the average past loss from accidents. Amazingly – and sadly - in 1980 alone 1,556 soldiers died in accidents. cannon, an out of control demagogue, and slightly loopy to boot.

TOPICS: Foreign Affairs; Government; Miscellaneous; News/Current Events
KEYWORDS: antiwar; chairmandean; dean; defeatists; democrats; dnc Navigation: use the links below to view more comments.
first 1-20, 21-28 next last
I realize Dean's comments have been talked about already. But there are stats in this one on deaths by accident of our military that is rather eye opening.

Wow. I can’t believe how many accidental deaths we have had. Go check the PDF document linked in this story. It is pretty amazing.

Or are those lives lost on 9/11 not casualties of this war? Islamists took them out in one day. 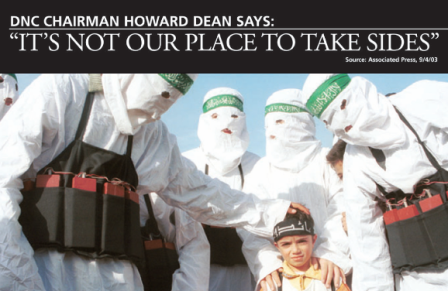 The Democrats have only their far left position of "cut and run" or their opportunistic policy of criticizing and offering no solution of their own, hoping to gain power simply on a Republican stumble or to somehow turn public opinion towards desiring "something else" other than Bush, no matter what that "something else" is, or whether it is defined at all.

Neither strategy works. The country rejects "cut and run" and sees it (rightly, in my view) as evidence of Democrats being weak on national security. And the public wants to vote FOR something, not just AGAINST something. they can drive Bush's negatives up somewhat, but do more damage to themselves ultimately.

What has happened to the 13,260 that have been injured in these terrorist attacks on us?

But you can bet the movers among the dens are getting their panties in knots about how to unload this turd gracefully.

Amazing. I will pull this thread out for my husband to see. We've talked about this fact often...the unsung deaths of soldiers in training and accidents in peacetime. He assures me it's not recklessness...it's training with huge heavy pieces of equipment, live fire and simulated training exercises in "real world" field conditions. I use to debate with him if the training risks were "worth it"...I haven't said a word about it since since the towers were taken out. I knew our Military was ready. Still, as impressive as their work is in Iraq...what the combined Armed Forces achieved in the rescue of New Orleans citizens from rooftops was amazing...they made it look so easy and so incredibly safe.... Naturally, the MSM did not spend too much time dwelling on those successes....

Great stats. I still know ultra-Lefties who keep talking about Viet Nam. Do you know where I can find stats from when JFK was elected and was in office in 1960, through LBJ's administration through 1974 when Nixon resigned? I think you get my drift.

I relayed what I had heard to my bro in New Orleans and he responded "What? is Dean saying we lost 25,000 so it looks like we are closer to that number in Iraq?"

Thats far fetched but not unrealistic to assume. Did anyone else actually hear Deans comments?

The standard (though willfully blind) left-wing response to your statement is that Saddam and Iraq had nothing to do with 9-11 or the "so-called" war on terror.

So not only are their memories short (for example, they conveniently forget how Clinton bombed Baghdad in 1998 for the purely political reason of delaying the House impeachment vote), but their logic circuitry is clearly substandard as well.

It's not just the chairman, the entire democrat party is whacko. They put their party above all else like good little socialists always do!!

It's been "explained" to me that he was referring to the lives lost after we "should have" left Vietnam... Tet. His reach is that we have lost too many lives to a war we should leave.

So not only are their memories short (for example, they conveniently forget how Clinton bombed Baghdad in 1998 for the purely political reason of delaying the House impeachment vote), but their logic circuitry is clearly substandard as well.

Your statement is only partially true...the strike aircraft were in the air 45 days earlier but Clinton recalled them when Saddam agreed to another round of inspections. Here is the chronology from the lost decades of the 90's:

1991 -- Following the end of DESERT STORM in March, Shiite Muslims in southern Iraq rebel, but are defeated by Iraq's elite Republican Guard. This is followed by a Kurdish insurrection that is also defeated. The United States, Great Britain and France create a safe haven for the Kurds north of the 36th parallel and ban Iraqi planes from the area.

1992 -- In August, the United Nations establishes a no-fly zone along the 32nd parallel after Iraq launches renewed attacks against Shiite Muslims. The United States and its allies begin patrolling the no-fly zone, operations which continue today. In December, the U.S. planes intercept and shoot down an Iraqi MIG-25 that violates the no-fly zone.

1993 -- In January, the United States accuses Saddam Hussein of moving missiles into southern Iraq. Iraq refuses to remove the missiles. Allied planes and ships attack the missile sites and a nuclear facility near Baghdad. In June, following the discovery of a plot to assassinate former President George Bush, U.S. ships fire 24 cruise missiles at intelligence headquarters in Baghdad.

1994 -- Saddam Hussein moves Iraqi troops to the Kuwaiti border. The forces withdraw after the United States deploys a carrier group, warplanes and 54,000 troops to the Persian Gulf region.

1996 -- In August, Saddam Hussein sends forces into northern Iraq and captures city of Irbil, a key city inside the Kurdish haven established above the 36th parallel in 1991. The following month, U.S. ships and airplanes attack military targets in Iraq to punish the Iraqi military and President Clinton extends the southern no-fly zone to just south of Baghdad.

1997 -- In October, a protracted confrontation with Saddam Hussein begins after Iraq accuses U.S. members of the U.N. inspection teams of being spies and expels the majority of U.S. participants. The U.N. Security Council threatens renewed economic sanctions. The confrontation continues into November as Iraq expels the remaining six U.S. inspectors and the United Nations withdraws other inspectors in protest. Inspectors are readmitted after the United States and Great Britain again begin a military build-up in the Gulf. However, later in November, Iraq announces it will not allow inspectors access to sites designated as "palaces and official residences." U.N. officials protest, having long suspected that such sites were being used to conceal possible weapons of mass destruction.

1998 -- The tensions that began in October 1997 continue. In February, U.N. Secretary-General Kofi Annan works out an agreement with Iraq that resumes weapons inspections. In turn, Iraq receives promises the United Nations will consider removing its economic sanctions. Inspections continue into August, when Iraq cuts ties with weapons inspectors, claiming it has seen no U.N. move toward lifting sanctions.


The Final Days
October 31 -- Iraq cuts off all work by U.N. monitors. The United States and Great Britain warn of possible military strikes to force compliance. A renewed military build-up in the Persian Gulf begins.

November 5 -- The U.N. Security Council condemns Iraq for violating agreements signed after the end of the 1991 Persian Gulf War.

November 11 -- The United Nations withdraws most of its staff from Iraq.

November 14 -- With B-52 bombers in the air and within about 20 minutes of attack, Saddam Hussein agrees to allow U.N. monitors back in. The bombers are recalled before an attack occurs. Weapons inspectors return to Iraq a few days later.

December 15 -- A formal U.N. report accuses Iraq of a repeated pattern of obstructing weapons inspections by not allowing access to records and inspections sites, and by moving equipment records and equipment from one to site another.

Your facts may be correct, but I see nothing here to explain exactly why Clinton had to commence the bombing on the very same day as the scheduled impeachment vote.

The bombing commenced on December 17, the SAME DAY that the House of Representatives was scheduled to vote on the Articles of Impeachment.

The clear objective was to delay the vote until the end of the term, only a couple of weeks away, so that the vote would be taken up in the new term where there would be more 5 more Democrats seated (and thus a greater likelihood that Clinton would win the vote and avoid impeachment).

With great self-righteousness, the Democratic House leadership publicly called for a postponement of the impeachment proceedings, arguing that America must unite behind the President while our troops were in harms way, and that the imeachment vote should not proceed as long as the military action continued.

The House agreed to postpone the vote, but only for one day, and it was held on December 18. Virtually as soon as it became evident that the Impeachment would proceed anyway, Clinton called off the bombing campaign.

Afterwards, Clinton and Secretary of Defense William Cohen stated publicly that the Baghdad bombing campaign had set back Saddam's WMD program by at least a year.

Incidentally, Congress was not consulted and NEVER voted to allow Clinton to undertake this bombing.

17 posted on 12/09/2005 6:27:42 AM PST by Maceman (Fake but accurate -- and now double-sourced)
[ Post Reply | Private Reply | To 15 | View Replies]
To: Maceman
You're probably right that he pulled the trigger as a political tactic. The fact is mobilization and planning for this strike occurred months earlier.

The other point here is that the Dems and the UN truly believed Saddam had WMDs.

Couldn't believe how stupid that was.