Navigation: use the links below to view more comments.
first previous 1-20, 21-40, 41-57 last
To: Rebelbase
"Wasn't William the Conqueror the one who was so fat that his bloated corpse burst open in Westminster Abby and filled the place with noxious odor during his funeral?"

I've read about that happening to someone, don't know who though.

As I remember;
low frequencies pass through both water and earth - used them to communicate to subs and silos.
does not seem TOO difficult to figure out they'd be useful to spot underground crypts as well...?

Yup. there was/is one transmission antenne that is 2500 miles long. (part of it consists of bedrock)

Originally the site of a medieval abbey, Syon was named after Mount Zion in the Holy Land. The abbey was dedicated to the Bridgettine Order, established in the 14th century by the great Swedish mystic St Bridget. One of the last great abbeys to be built (founded by King Henry V in 1415), Syon was dissolved by King Henry VIII in 1539.

Syon Abbey had become renowned for its spiritual learning, public preaching and library. It was favoured and visited by King Henry VIII’s first wife, Catherine of Aragon but it got embroiled in the religious turmoil of the King’s divorce and his subsequent action of making himself Supreme Head of the Church in England. The Father Confessor, of the nuns, Richard Reynolds, could not accept the King’s supremacy and was brutally executed in 1535, his body placed on the abbey gateway. He was later canonised as a martyr.

In 1547, King Henry VIII's coffin was brought to Syon on its way to Windsor for burial. It burst open during the night and in the morning dogs were found licking up the remains! This was regarded as a divine judgement for the King's desecration of Syon Abbey.

Corpse of William the Conqueror Explodes

England's conqueror died. His servants stripped him bare and abandoned his body, but a kind-hearted knight arranged a funeral for him at the abbey of St. Stephen in Caen.

The funeral was disrupted by the outbreak of a fire. After extinguishing it, the pallbearers tried to cram the king's bloated corpse into a too-small sarcophagus. The body exploded, creating a horrible smell that sent mourners running for the exits.

from everything i have read about william the bastard, it is far from unclear that he didn't plan to invade england no matter what. claims about who promised what to whom(including that harold godwineson had promised to support him as well,during harolds 'visit'), mean the claims alleged were for public consumption.

the picture of william that i have gotten is that the issue was if he could take something, not if it had been promised or not.

obviously through the mist of time and limited sources it is conjecture but there seems no doubt about the ruthless efficiency with which william engaged every military task.

i think his tomb was in normandy before it was vandalized and destroyed.

addendum - apparently the corpse exploded, but in france?

Was he one of the guys who fled to New England for awhile and were successfully hidden by the Puritans? (I think the powers that be caught up with them eventually.) 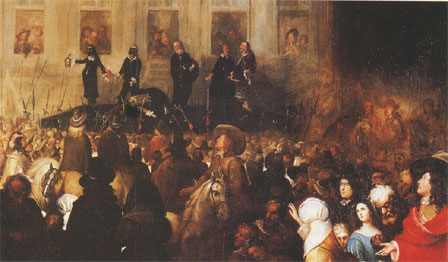 i hope i did this right? re-reading, I might have said the opposite of what I intended rofl

No, Charles II had General Harrison tried, hung, drawn and quartered and his head displayed on the wall of London. But many of his relitaves decided that it was a good time to come to America. And here we be.

Maybe Harrison is in that picture.

They got kinda spooked, and I don't blame them. Somebody said of Charles I that nothing became him in his life so much as his departure from it -- but he made a most holy, courageous, and impressive death.

Saturday 13 October 1660 To my Lord’s in the morning, where I met with Captain Cuttance, but my Lord not being up I went out to Charing Cross, to see Major- general Harrison hanged, drawn, and quartered; which was done there, he looking as cheerful as any man could do in that condition. He was presently cut down, and his head and heart shown to the people, at which there was great shouts of joy. It is said, that he said that he was sure to come shortly at the right hand of Christ to judge them that now had judged him; and that his wife do expect his coming again. Thus it was my chance to see the King beheaded at White Hall, and to see the first blood shed in revenge for the blood of the King at Charing Cross. From thence to my Lord’s, and took Captain Cuttance and Mr. Sheply to the Sun Tavern, and did give them some oysters. After that I went by water home, where I was angry with my wife for her things lying about, and in my passion kicked the little fine basket, which I bought her in Holland, and broke it, which troubled me after I had done it. Within all the afternoon setting up shelves in my study. At night to bed.


his father was Aethelred the Unraed (more often, “the Unready”)

Better Know A Despot: Æthelred The Unready
By Richard Stockton on November 6, 2015 in Curiosities, Europe, and History
http://all-that-is-interesting.com/aethelred-the-unready/2