Last week I sent the following e-mails to Time Magazine. They have refused to reply and therefore I believe they are hiding the truth.

1. Do you have written assurance Matt Cooper did not receive strategic or any other type of advise from his wife and Clinton adviser, Mandy Grunwald, concerning the handling of the Plame/Rove controversy?

2. Why don't you disclose the relationship between Mandy Grunwald and Matt Cooper on any Cooper article concerning politics?

3. Was Miss Grunwald or her father instrumental in Matt Cooper obtaining a job at Time Magazine?

Your cooperation is appreciated.

I see you have refused to answer my previous email.

Has Clinton adviser/Democrat strategist Mandy Grunwald given any advise to Time Magazine or any of the Time Magazine employees involved in the Rove/Plame affair on how to handle the affair?

I am on a deadline. Please reply at your earliest convenience.

Prior to Newsweek, Cooper was a senior editor at The New Republic, where he wrote the acclaimed "White House Watch" column. He profiled many political insiders. Previously, Cooper was a White House correspondent for U.S. News & World Report, where he covered Clinton's 1992 presidential campaign. He also served as the magazine's Atlanta Bureau Chief. Cooper was also an editor at The Washington Monthly, where he wrote and edited articles on culture and politics. From 1986 to 1987, he was a Washington correspondent for Thompson Newspapers, and from 1984 to 1986, Cooper served as a writer and researcher at the U.S. Commission on Civil Rights.

Cooper moonlights as a stand-up comedian, and in November 1998 was named "Washington's Funniest Celebrity" after an evening of comedy at Washington's Improv. His Clinton impersonation has been praised by Vanity Fair and New York Times columnist Maureen Dowd praised him for an ability to "spin whimsy out of smarmy," proclaiming, "I want to be more like Matt Cooper."

Mandy Grunwald was not only media adviser and director of advertising for the 1992 Clinton-Gore campaign, but later designed strategy and ads for Clinton's New York Senate campaign in 2000. She was also an adviser to the Wellstone campaign

She was also daughter of Henry Grunwald.

Time magazine editor who led the publication's shift from conservatism to a more leftist view.

TOPICS: Government; Politics/Elections
KEYWORDS: cialeak; cooper; liar Navigation: use the links below to view more comments.
first 1-20, 21-40, 41-60 next last
Following the high journalistic standards of Time Magazine
1 posted on 07/17/2005 6:49:23 PM PDT by FreedomSurge
[ Post Reply | Private Reply | View Replies]
To: FreedomSurge
She's as left as the come, but she's effective. She fought many fires during the nasty eight years of Clinton.

Could minor Ambassador Joe Wilson himself have been the source in blowing his own Wife's "cover" (even if she had not been a covert CIA agent at the time fothe alleged leaks)?

It is distinctly possible, (though it may be unlikely that Joe Wilson himself directly was NY Times Judith Miller's source), since Joe Wilson himself evidently routinely bragged openly to strangers about her CIA employment, prior to such "cover" being "blown" in the press.

Here's an example of Joe's apparently routine and open bragging about Valerie being a "CIA agent," which became known directly to me over a year ago:

He certainly bragged about it per a famous and highly reliable source's (named below) account of his own face-to-face encounter with Amb. Joe Wilson prior to Valerie Plame's "outing" as a CIA agent/employee.

Based upon a personal conversation (we were in a small group eating; it was NOT an "off the record") I had with eminent historian Victor Davis Hanson (we were at a luncheon table together during a trip to Europe), it appeared entirely possible that Joe Wilson himself was the (or one source, if not the original one) possible source in revealing his own wife's status as a CIA agent or employee.

Victor Davis Hanson (Wilson presumably knew Victor Davis Hanson wrote regularly for NRO (National Review Online), had done OpEds for the Wall street Journal, and other publications, and had his own Website with a widespread following) said he (VDH) & Joe Wilson were both in the same "Green Room" before a televised debate-discussion on Iraq, etc. and Joe first warned the TV make-up person not to get powder on his $14,000 Rolex watch, then he bragged to Victor about several things (possessions and trips to Aspen, etc.), like his expensive car (I think it was a Mercedes), and then bragged about his beautiful ("hot") wife who, Joe Wilson said (braggingly) was a CIA operative.

I asked Victor Davis Hanson Why he didn't write up this account.(?) He replied that Joe Wilson would probably simply deny it, since only he (VDH) & Joe Wilson were in the Green Room together before the broadcast.

However, it is now easy to surmise that Joe Wilson is a crass, materialistic, self-promoting, vain, egotistical, bragaddocio-opportunist, so this account is perfectly consistent with Valerie Plame's TWO photo shoots in Vanity Fair.

3 posted on 07/17/2005 6:52:54 PM PDT by FReethesheeples (Gonzales appears to be quite WEAK on Property rights!)
[ Post Reply | Private Reply | To 1 | View Replies]
To: Howlin
I think it is important that everyone defending the truth in the Rove/Plame incident identify Cooper as Mandy Grunwald's husband.

The filth, corruption and perfidy of every one associated with Willie and his criminal administartion never ceases to amaze me. Why hasn't this been raised before? Time isn't the only left-wing media rag that knows that this is where this sludge got his info. Why hasn't the neocommunist media covewred this relationship?

Come on, isn't the Ann Coulter rule in effect? If lovely Mandy is mentioned, we must have the photos.

LOL Treat them with the roughness they deserve. "Come on, move it, I'm on a schedule here, cough it up!"

There's a Mandy Grunwald rule? Please Lord, you're not gonna tell me is there is a Greta Van Sustern rule too. 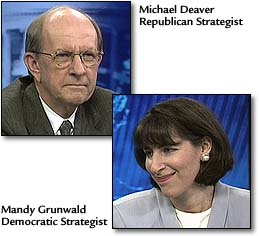 Thank you so much for your post. I have followed this story very closely and had NO idea Mandy G. is married to the Time reporter. I feel hoodwinked once again. Only on FR can I get relevant facts.

Eek! Her nose is big enough to be shared by a family of four. I certainly hope Mr. Cooper keeps a supply of paper grocery bags next to the bed. Mandy Grunwald & Matt Cooper
16 posted on 07/17/2005 7:09:55 PM PDT by Khurkris (I am currently in a typhoon, lots of rain, lots of wind. Not pleasant.)
[ Post Reply | Private Reply | To 6 | View Replies]
To: spyone; rface
It's not a secret. I want to start a trend on FR and on talk radio if at all possible to always refer to Matt Cooper as husband of Mandy Grunwald.

His name is not "Matt Cooper" it is "Matt Cooper, husband of demo party hack Mandy Grunwald."

Hello, everyone. This is Mrs. DFU. My husband was just reading this thread, started screaming, and went running down the street. Apparently he had seen a picture that scared the living hell out of him. Excuse me, I have to call the police and see if we can find him.