After talking for months about the “constitutional/nuclear/whatever option,” Senate majority leader Bill Frist was finally set to bring the measure to the table. The move to restore the rights of the majority in consenting to judicial nominees by a majority vote was finally going to signal the end of the Republican weasel-ness that plagues the party every time it gains power. Then the weasels stepped in.

The “great compromise” resulted in the Republicans giving up everything while the Democrats gave up nothing. The give-take deal worked as it always has. Republicans give, Democrats take. The parties shake hands and the media admiringly writes about the glorious behind the scenes workings of the brave constitution-saving centrists. Spare me.

Apparently, the mavericks of the Republican Party agreed to give up their constitutional, Majority-rights status, over 200 years of historical tradition, and their dignity in exchange for the Democrats using slightly less rhetoric. It’s the deal of the century. But do not worry; they promise to only block the rights of the majority in “extreme circumstances.” Of course “extreme” means any judge who opposes abortion, supports the death penalty, has a basic reading knowledge of the Constitution, and probably wouldn’t discover a constitutional right for free HBO hidden in the 2nd Amendment.

After the Unmagnificent Seven, led by the already-running-for-president-and-publicity-whore John McCain, derailed the opportunity for a Senate showdown, the minority party (the one with only 45 votes) proclaimed: “Democracy wins.” Democracy for a liberal is whenever their side wins, whether it is by minority suppression of majority will or through judicial decree. Democrats are inherently anti-democratic based on the simple fact that their ideas are generally unpopular with Americans.

No issue has been as democratically decided as gay marriage has been over the years. In 2004, every state that proposed a ban on gay marriage saw it approved overwhelmingly by voters. The closest such a ban came to failing was in Oregon where it passed with 57% of the vote. In 2000, the “progressive” and “open-minded” voters of California approved Proposition 22, which re-affirmed that marriage is between a man and a woman, by a margin of 62%-38%.

As a result of such democratic happenings, San Francisco mayor Gavin Newsome denied both the will of the people and the law and ordered that marriage certificates be given out to same-sex couples. Joining Newsome was liberal activist judge Richard Kramer who struck down the ban on gay marriage as unconstitutional and mean-spirited. Democracy wins again! The voice of the people prevails!

For the past three decades, liberals have had to rely on getting their way almost entirely by subverting the will of the majority. Conservatives are always willing to throw out ballot measure to even the most liberal of states in order to let the people decide what their own laws should be. Liberals never are.

Over two-thirds of Americans think that partial-birth abortions should be illegal, and over 75% of Americans think a minor should have to have parental consent before getting an abortion. Judges have struck down such laws, and the latter will now be heard by the Supreme Court. Other basic liberal issues like affirmative action are constantly being shot down by the people, which are then taken by liberals to friendly courts in order to get them to overturn the will of the people. (Yet another victory for Democracy!)

The Republicans have the Presidency, the Senate, and the House of Representatives. The Democrats have the activist, extremist judges. The Republicans had the power to “level the playing field” on the judicial playground, but they dismissed such power in order to play nice, a gesture never returned by Democrats.

About the Writer: Dustin Hawkins is a freelance writer and graduate student at Florida Atlantic University. His website is: http://www.dustinmhawkins.com/.

This guy got it spot-on.

I hope Frist realizes that any hopes of the Presidency he might have had just died with this "deal".

I really wish Frist would quit stealing oxygen from the rest of us.....


Thanks for your contribution to this thread!

The next time Frist wants to get something done in the Senate, I suggest he set up a row of lights, some microphones, and a few fake T.V. cameras on one side of the building. Wait one or two minutes (like a rat to the cheese), and take a vote while McCain is asking "Are we on?"

McCain could be a third party candidate and give us a replay of 1992, this time with the witch.

"The “great compromise” resulted in the Republicans giving up everything while the Democrats gave up nothing. "


And this is the bottom line.


McCain is already on the record (from Baghdad, no less!!), saying to the world that he thinks Killery The Killster "would make a good president!"


Has his brain turned into tapioca? How can a Republican Senator say such a thing?......even in private, let alone on a televised interview seen around the world?! 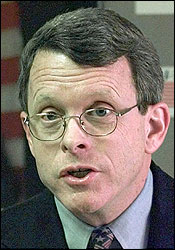 
Also am forwarding this to my entire, formidable email list! ACTION, TROOPS!