A frozen sea, surviving as blocks of pack ice, may lie just beneath the surface of Mars, suggest observations from Europe's Mars Express spacecraft. The sea is just 5° north of the Martian equator and would be the first discovery of a large body of water beyond the planet's polar ice caps.

Images from the High Resolution Stereo Camera on Mars Express show raft-like ground structures - dubbed "plates" - that look similar to ice formations near Earth's poles, according to an international team of scientists.

But the site of the plates, near the equator, means that sunlight should have melted any ice there. So the team suggests that a layer of volcanic ash, perhaps a few centimetres thick, may protect the structures.

"I think it's fairly plausible," says Michael Carr, an expert on Martian water at the US Geological Survey in Menlo Park, California, who was not part of the team. He says scientists had previously suspected there was a past water source north of the Elysium plates. "We know where the water came from," Carr told New Scientist. "You can trace the valleys carved by water down to this area."

He says the evidence is "compelling" for past flooding near the plates. "Maybe the ice is still there in the ground, protected by a volcanic cover, as they suggest," he says.

There is abundant evidence for the past presence of water on Mars but today it appears relatively dry, with water ice confined to the planet's polar caps. Remote observations of hydrogen atoms by NASA's Odyssey spacecraft in 2002 hinted that ice might be locked in the top metre of soil at lower latitudes. But the evidence was inconclusive as the signal could have come from minerals exposed to water in the past. 45 metres deep

The team of researchers, led by John Murray at the Open University, UK, estimates the submerged ice sea is about 800 by 900 kilometres in size and averages 45 metres deep. Images of the pack-ice-like plates can be seen in this PDF document, which was not embargoed when New Scientist first viewed it on 15 February.

The team arrived at the depth estimate by studying craters in the plates. They say the craters appear too shallow for their diameters - suggesting ice is filling them up. Moreover, the surface appears unusually level - as if ice were beneath it. This evidence suggests the plates are not just imprints left by ice that has now completely vanished. Crater counts indicate the age of the plates is about 5 million years.

In their paper, the researchers trace a possible history for the underground ice. It begins with huge masses of ice floating in water on Mars. The ice was later covered with volcanic ash, preventing it from sublimating away into the thin atmosphere. Then, the ice broke up and drifted before the remaining liquid water froze. All of the ice not protected by ash sublimated away, leaving the pack ice plates behind.

"If the reported hypothesis is true, then this would be a prime candidate landing site to search for possible extant life on Mars," says Brian Hynek, a research scientist at the Laboratory for Atmospheric and Space Physics at the University of Colorado at Boulder, US. Lava flow

One problem with this proposed frozen sea is that there is very little water vapour in the Martian atmosphere today. Carr says that if there had been relatively recent sublimation, as the scientists propose, some traces of water should remain in the atmosphere.

Also, similar plate formations have been seen on Mars before but attributed to solidified lava. But Murray's team says a lava flow does not fit their observations. These plates are up to two times larger than known lava plates on Earth, and they leave behind smooth, straight lanes when they ram into craters and islands. These observations "imply an extremely mobile fluid, with similar characteristics to water," the researchers write.

Carr says there are other regions on Mars with similar plate formations, meaning this might not be the only subterranean water. But ultimately, it may be difficult to prove whether the frozen sea still exists today.

The MARSIS radar, which will soon be deployed on Mars Express, should be able to detect underground liquid water but may have trouble differentiating between ice and rocky soil. And the ice is not visible directly. "To preserve it, you've got to bury it," Carr says. "But if you bury it, you can't detect it."

Sure looks like ice to me...but covered in dust. 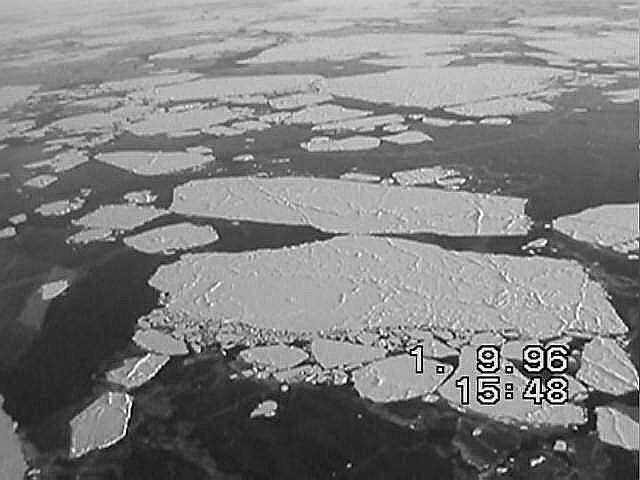 If it was ice, wouldn't the craters eventually disappear?

That was already covered in the fine film 'Total Recall'.