Prince Harry has apologised for wearing a swastika armband to a friend's fancy dress party.

You've got to be kidding me!

He has no brains. Pathetic.

He sure is an ignorant pup, isn't he?
To bad he didn't live in the 40's, like his Grandma!

I imagine having lost his mother at a young age has clouded his judgment.

More like a brain malfunction. However, if this is the worst snafu he ever makes in his life, he'll turn out to be a pretty good person.

He should have said he was masquerading as his uncle, the Duke of windsor.

Don't excerpt the BBC, and when you do excerpt include more then one line.

Prince Harry has apologised for wearing a swastika armband to a friend's fancy dress party.
Clarence House issued a statement in response to a photograph published on the front page of the Sun newspaper under the headline, "Harry the Nazi".

It read: "Prince Harry has apologised for any offence or embarrassment he has caused. He realises it was a poor choice of costume."

The Board of Deputies of British Jews said the costume was in "bad taste".

A spokesman said: "The board is pleased that he's apologised for the incident.

"It was clearly in bad taste, especially in the run-up to holocaust memorialday on the 27th of this month, which the Royal Family will be taking a leadingrole in commemorating."

The picture was taken at the weekend at a friend's birthday party in Wiltshire, which had the fancy dress theme "colonial and native".

Prince Harry, 20, appears to be wearing a German desert uniform and a swastika armband.

Rabbi Dr Jonathan Romain, of the Reform Synagogues of GreatBritain, said: "The fact that the palace has issued an apology indicates thatthis was a mistake by the prince.

"But having been given, the apology should now be accepted."

But the Queen's former assistant press secretary, Dickie Arbiter, said: "This young man has got to come up front and be seen in person making an apology."

Former armed forces minister Doug Henderson MP said the picture showed the prince was "not suitable" for the prestigious royal military academy Sandhurst, which he is due to attend later this year.

"If it was anyone else, the application wouldn't be considered. It should be withdrawn immediately," said the Labour MP for Newcastle upon Tyne North.

The prince, who is third in line to the throne, hit the headlines last year after a scuffle with a photographer at a nightclub.

The Sun reported that Prince William was also at the party - dressed as a lion.

It's all that bloody interbreeding. 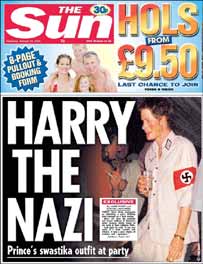 If he'd worn a hammer-and-sickle, he'd've been applauded as terribly fashionable.

It is one of teh worse uniforms they had.

The black SS one was much better.

Still would have been bad taste though, eh wot?