The world's tiniest surviving baby made her public debut at a US hospital, a wrinkled, but perfectly formed three-month-old who was the size of a cell phone at birth.

Rumaisa Rahman weighed in at just .24 kilos (8.6 ounces) when she was delivered September 19 -- 36 grams (1.3 ounces) lighter than the previous record holder.

Doctors said they waited to announce the record-setting birth of Rumaisa and her slightly larger twin until the newborns were nearly ready to leave the hospital, and until after it was clear they were healthy.

The infant was delivered 15 weeks before her due date by caesarian section at Loyola University Medical Center in suburban Chicago because doctors were concerned about the preemie's development.

Her mother Mahajabeen Shaik had been hospitalized early because she had developed severe pre-eclampsia, high blood pressure, which was affecting her health as well as Rumaisa's activity in the womb.

"We were a little surprised at just how small Rumaisa was, but pleased to see that she was vigorous and seemed to be getting a good start," said William MacMillan, the obstetrician who delivered the infant.

Shaik, 23, and her husband, Mohammed Abdul Rahman, 32, both originally from Hyderabad, India, could not hold their daughters until their second month because the babies were hooked to drips and were inside incubators.

"I was very nervous when I saw the babies first because they were too tiny ... there were a lot of questions running in my mind," said Mohammed Rahman Tuesday, adding "I'm thankful to Allah that everything went fine."

The babies were conceived naturally, hospital officials said, and are the first children for the couple, who were married in India in January.

Studies suggest she will develop normally, according to Jonathan Muraskas, professor of pediatrics and neonatal-perinatal medicine at Loyola University Chicago's Stritch School of Medicine.

Ultrasounds have shown that Rumaisa's head is normal and there is no bleeding in her brain, a common complication that can put a baby at risk for cerebral palsy.

Both girls underwent laser surgery to correct vision problems that are common in premature babies.

Doctors say they are doing well, taking all their feedings by bottle and receiving some minimal oxygen to help with respiratory functions because their lungs have not completely matured.

Hiba may be discharged from the hospital by Christmas, hospital officials say. Rumaisa may go home the first week in January.

The previous record holder for the world's smallest baby was held by Madeline Mann who was born in 1989 -- also at Loyola medical center.

Rumaisa Rahman (R) is held next to her fraternal twin sister Hiba by a nurse as they are introduced to the press at Loyola University Medical Center in Maywood, Illinois. Rumaisa, born 19 September 2004 at 244 gram (8.6 ounces), is the smallest known surviving baby.(AFP/Getty Images/Scott Olson)

>>>If nothing else, shouldn't we at least have a discussion about abortion after the 24th week here in this country?

It is a valuable market (satan style)

ITS GREAT STORY~ i dont see how anyone can look at those two precious babies and still think to themselves.. "well its my choice what i want to with my body..and that choice is to kill them" 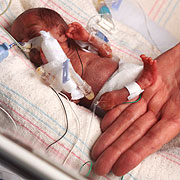 I was also unaware that docs would perform laser surgery on eyes this early. Amazing what can be done.

OMG, she is soooo tiny!

I bet that mother is nervous!

Newborn's are intimidating enough. They seem so fragile.

Blind rage, blind ignorance, all tools of the devil, and for good reason...

These little ones were born 1/10th of the weight of my full term twins. I thought mine were small, but the one baby didn't even fill up a palm at birth. Amazing, and they are doing relatively well now.

BTW, I finally convinced one of my coworkers against abortion when he went with his wife for the ultrasound for his first. "Isn't that a cute litle person?" is what I said as we looked at the pics from 22 weeks.

Normal gestation is 40 weeks, which has these little ones being born at 25 weeks.

Can you site the source for this list? (I would like to keep it on file for debates with collegues) :)

I know. Her leg is shorter than the nurse's middle finger.

I think having twins is easier and better in most ways to having singles, not that there is a lot of choice in the matter. I also have 2 singles, all 4 of my kids are female.

Can you cite an objective source for that price list? I know some people I'd like pass it along to....it'll ruin their day, lol!

All fetuses are beautiful.

Our last tipped the other side of the scale at 12lb. 7 oz.

I give my wife absolutely all the credit. All natural, no drugs, lots of pain.