DENVER - The refreshing bitterness of an English pale ale, the clean light taste of a Pilsener, the dark, almost burnt graininess of Irish stout. To Dr. Alex Maltman, these are prime illustrations of the power of geology.

Wine connoisseurs often talk of terroir - a French word expressing the notion that vineyard soils impart flavors to the finished wines. But data to back up the notion is sketchy, said Dr. Maltman, a professor of earth sciences at the University of Wales. And though whiskey distillers often make much of the water they use, there is little correlation between the taste of whiskey and the geology of where it is made, he said.

Beer and geology, on the other hand, are closely entwined, Dr. Maltman said last month at a seminar on geology and beer held at a meeting of the Geological Society of America.

For one, geologists drink lots of beer, typically ending a long day examining rocks with a trip to the nearest bar. Mayor John W. Hickenlooper of Denver, a former geologist turned pub owner, told the geologists how an earlier geology meeting in 1988 bolstered his fledgling microbrewery.

And as Dr. Maltman got up to talk, two-thirds of the audience also got up and headed for the lobby, where Denver microbreweries were handing out samples in small cups.

"I'd like to suggest this evening, to the people who remain, that in fact it is with beer that there is the most direct link between the drink and geology," Dr. Maltman said.

Beer is more than 90 percent water, and because almost all brewers use water from wells, not rivers or lakes, the different styles of beer were traditionally derived from the rocks that the breweries sat upon.

Today beer is usually thought of as an unchanging product. But much scientific research and technological effort have been put into achieving that consistency from agricultural ingredients that change from year to year and season to season.

"There's a lot of science going on about beer," said Dr. Charles Bamforth, a professor of brewing science at the University of California at Davis. "The scientific understanding of beer is better understood than that of wine. It has been studied for many, many years in considerable details in a number of locations around the world."

Beer of various varieties has been drunk for thousands of years. The Epic of Gilgamesh, a king from the third millennium B.C. who ruled a land that is part of modern Iraq, mentions beer.

In the New World, archaeologists reported finding a hall in the Andes of Peru this summer with 20 brewing vats more than 1,000 years old. The brewery could be the oldest known tangible remnant of "large-scale state-sponsored institutional brewing," said Dr. Patrick Ryan Williams, an assistant curator at the Field Museum in Chicago.

The brewery produced an Andean beer called chicha from berries of the Peruvian pepper tree. The output, several hundred gallons at a time, had to be consumed quickly, at large feasts, because chicha turned bad within a week. "They came to the beer," Dr. Williams said. "It wasn't your typical bottle-and-export kind."

Beer is, by definition, alcohol fermented from grain, and most beer today is fermented from barley that is partially germinated, or malted. Hops, a type of flower, is added to give a bitter, fruity taste to the beer.

When commercial beer making started in the 19th century in Europe, brewmasters came across a problem similar to those experienced by the Andean brewers, that the beer spoiled easily. Yet there were places that were exceptions. Burton-on-Trent in England was one, a small town that had more than 30 breweries, producing a style of beer called pale ale or English bitter.

"Let's not forget at this time beer was not pasteurized," Dr. Maltman said. "Burton beer, somehow, did travel well. The supposition was that it was the water, but it was some decades before it was demonstrated what was going on."

Burton-on-Trent sits on sandstone rich in minerals like gypsum from water that had percolated through the rocks long ago. The waters had a pH of 5 to 5.5, ideal for extracting sugars from malted barley steeped in warm water, an important step known as mashing.

"This is why the Burton waters were so good for brewing," Dr. Maltman said. "It turned out they had a very high mineral content, but just in the right balance to get the right acidity for good leeching, good mashing. The balance of fermentable sugars has everything to do with the flavors and the kind of beer that results. The mashing stage is crucial."

The water was also rich in sulfates, which acted as a preservative, allowing the beer to be shipped to distant locations, even India - the Burton beers were called India pale ales, or I.P.A. for short. "The I.P.A. style came about because of the geology on which Burton was sited," Dr. Maltman said.

Today, any brewer anywhere can produce India pale ales by adding minerals to - or "burtonizing" - the water to match what burbles in Burton-on-Trent naturally.

A new style of beer called lagers developed in continental Europe. While ales are brewed at room temperature, the lager is fermented at chilled temperatures. (A different strain of yeast is used, too.)

Pilsen, in what is now the Czech Republic, became a noted practitioneer of lagers, and geology again had a central role in defining the taste. The well water of Pilsen is drawn from a formation of metamorphic rocks, transformed underground by high pressure and heat so that they are almost impermeable. The water slides through cracks, but it draws almost no minerals from the rocks. This mineral-light water enhanced the clean, light taste of the beer, which became known as Pilsener.

"It came about essentially because of the geology and the waters being derived from those metamorphic rocks," Dr. Maltman said.

The pH of the Pilsen water was still in the desired range for effective mashing of the barley.

Munich, however, does not have ideal water for beer making. It is too alkaline, drawn from aquifers that lie in calcium-carbonate-rich sand and gravel washed down from the Alps. Furthermore, German law has long forbidden brewers to tweak the water chemically.

"So they're a bit stuck," Dr. Maltman said. "Instead the brewers have a little trick. If you roast the malt a little, then phosphates are released from the barley, which increases the acidity just enough to get into the pH range. It means you get a slightly different-tasting beer. And of course it means that the beer is dark."

The waters of Dublin, sitting on 300-million-year-old limestone, are even more alkaline and require even more roasting of the barley. "What they call black malt," Dr. Maltman said. "Even then the extraction isn't that good. It means the beer has a distinct grainy flavor and it certainly means the resulting beers are very, very dark, black even." That yields the distinctive taste of Guinness and other Irish stouts.

Technology has allowed brewers to overcome the traditional limits of geology, and brewers know how to compensate for year-to-year variations in barley and hops to produce a consistent taste.

For example, brewers know that beer brewed in a short, squat vat tastes fruitier than that brewed in a tall vat because of the difference in water pressure pushing down on the yeast.

Research continues lengthening the freshness of beer. Unlike wine, beer generally tastes best when first made. Many flavor compounds in beer are unstable and fall apart into less desirable flavors over time.

The chief culprit is oxygen. "Oxygen is death to beer," said Dr. Graham G. Stewart, director of International Center for Brewing and Distilling at Heriot-Watt University in Edinburgh. Oxygen reacts with fatty acids in the beer to form compounds called unsaturated aldehydes that "literally taste and smell as if you put your head in a cardboard box," Dr. Stewart said.

Modern breweries have been able to reduce oxygen to almost nothing. Refrigeration also slows the chemical reactions that produce the off tastes.

Light is also an enemy, reacting with bitter compounds in the hops to produce another undesirable compound "which really does give an intense aroma just like a skunk," Dr. Bamforth said. Brown beer bottles, though not green or clear glass, block out the wavelengths of light that cause the molecules to break up. Some brewers get around that problem by extracting the bitter compounds from hops, a process analogous to producing vanilla extract from vanilla, and modifying the compounds so that they are no longer susceptible to light.

"The chemistry is really quite complicated," Dr. Bamforth said. "What you no longer get is a skunking."

Not that beer drinkers care about the technical details. Most, like the geologists in the lobby drinking beer rather than listening to a lecture about drinking beer, just enjoy what is in the mug.

"It lacks the snobbiness," Dr. Maltman said. "It's more egalitarian." 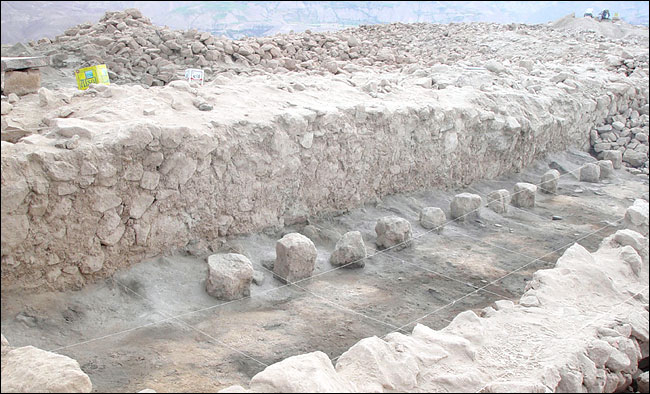 Patrick Ryan Williams/The Field Museum, Chicago
The upright stones were used to support a large brewing vessel where mash was boiled at an ancient brewery in the Andes. Archaeologists say it is 1,000 years old.

Making your own beer is easy and fun.

Took me 3 beers to get through that.

My wife and I spent a couple of weeks visiting Ireland last year and we discoverd that Guiness tastes better when brewed with home waters.

I had a friend that was a obsessive home brewer, and he had my well water tested and said it was almost a match for the Bass plant in Leeds. To make his pale ale he would trade me a six pack for 10 gallons of water.

I almost cried when he moved away.

Yeah, you must have suffered when that ended.

Why must you post an article to make me thirsty at 9:19AM?It is Saterday and I really don't have a whole lot to do today but there's just something a little too "white trash" about cracking a beer before breakfast.

The water was also rich in sulfates, which acted as a preservative, allowing the beer to be shipped to distant locations, even India - the Burton beers were called India pale ales, or I.P.A. for short. "The I.P.A. style came about because of the geology on which Burton was sited," Dr. Maltman said.

It surprised me to see such an error from an otherwise interesting, if unproven article. It makes me suspect a great deal of his conclusions, as I thought that this was pretty common knowledge among beer snobs.

I.P.A indeed get's it's name from the Empire shipping beers that far. But it gets it's bitterness from the hops, which is also a natural preservative. They LOADED the ales with hops to make the long ship's journeys - which is why a true I.P.A. is usually considerably more bitter than any other ale.

I now return myself to MY regularly scheduled ale - today it's an Old Fezziwig's, in honor of the season.

Beer and Bread - the two pillars on which all human civilization rest.

Unless it's July and you're on a Colorado River camping and boating weekend....6 a.m. suds are in order, and in fact expected.

I have a friend from Ireland here (Chicago), and he refuses to drink Guiness until he goes back.