It's taken 50 years, 29 movies and, owing to one monster-sized tail, who-knows-how-many accidentally knocked over craft-service tables, but Godzilla is finally getting his Hollywood coming-out party.

In the coming days, the made-in-Japan leading lizard will ride in a parade, get starred on Hollywood Boulevard and storm the red carpet for a Grauman's Chinese Theatre movie premiere.

He'll also say goodbye. Or so it's been said.

"It" is Godzilla Final Wars, billed as "the last Godzilla film."

Well-versed in kaiju eiga (that's Japanese for "monster movie"), Godziszewski is skeptical that audiences have seen the last of the big guy.

"Even when Godzilla is killed in a movie he's never really dead," Godziszewski says.

There is no indication that Godzilla breathes his last atomic breath at the end of Final Wars. But there are pledges from his bosses at Japan's Toho Studios that their star is headed for retirement.

The move comes as fandom wraps a year spent commemorating Godzilla's golden anniversary. It was 50 years ago this month--on Nov. 3, 1954--that Gojira, a serious-minded, black-and-white horror film about a giant creature who doesn't mind where he steps in Tokyo, opened in Japan. In 1956, the movie was redubbed, recut, recast (see: Raymond Burr) and exported to the United States under its new title: Godzilla, King of the Monsters!.

Toho has gone on to produce 28 cult-inspiring films, including Final Wars. In all, Godzilla has starred in 29 films if you count 1998's U.S.-made Godzilla, which most fans frankly don't.

As Godziszewski points out, Godzilla has taken breaks before--he's even been killed before--only to return to make life heck for puny humans and assorted atomic freaks of nature.

"No matter what happens in the end to conclude the movie, Godzilla will never actually die," Godziszewski says.

Tsutomu Kitagawa, however, is emphatic that Godzilla is going away for good this time. Kitagawa is the ultimate Godzilla insider, in that he's been inside the Godzilla suit for five of the last six Japanese-produced films.

"[Shogo] Tomiyama, the producer, and the staff of the movie are doing their best to make this the best movie because it's the final movie," Kitagawa said this week of Final Wars, through a translator. "They put everything in this movie."

Indeed, few parts of the world are safe in Final Wars, with New York, Paris, Shanghai and Sydney all taking hits.

Kitagawa will be on hand, and in character, for Monday night's Grauman's Chinese invite-only screening, the first time a Japanese-made Godzilla movie has premiered outside of Japan. (The movie opens for paying customers in Japan on Dec. 4.)

Technically, that last one's a first for Kitagawa, not Godzilla--although how many holiday dinners can a skulking monster possibly have been asked to attend?

Stateside for the last week attending a Godzilla film festival in San Francisco, Kitagawa will be at Casa Aiken at the invitation of Keith Aiken, of the Japanese fantasy film and TV site, Henshin!Online (www.henshinonline.com). Peggy Aiken is Keith Aiken's understanding maternal unit.

"She said, 'Well, you've been a fan since you were a kid, so I guess it's come to this,' " Aiken said of his mother's reaction to having Godzilla over for dinner.

Aiken said the traditional turkey and fixings will be served.

After 50 years, and another looming retirement, Godzilla deserves the drumstick. 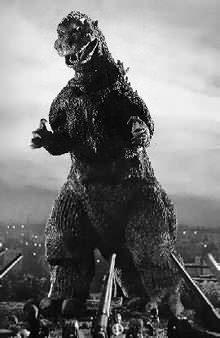 I'm FReepmailing the sidebar moderator to see if we can get this into breaking news? I just had to know that.

Better yet. Why don't we let Godzilla loose on Iran so he can take care of the insurgency problem? :)

Until they decide otherwise, when he'll come right back. It's not like any continuity sticks with these movies.

You've got to read this article. It's breaking news now!

Now, I'm depressed! I'm two years older than Godzilla! Even worse: He's retiring before I can!!

In the coming days, the made-in-Japan leading lizard will ride in a parade, get starred on Hollywood Boulevard and storm the red carpet for a Grauman's Chinese Theatre movie premiere.

That footprint ought to take up a bit of urban renewal concrete. ;O)

Just when you think you've heard the last from him...

9 posted on 11/24/2004 8:04:50 PM PST by PetroniusMaximus
[ Post Reply | Private Reply | To 1 | View Replies]
To: bullseye876
whilst it was steaming in the Sea of Japan, the entire cargo ship full of bean burritos manufactured by the Frito Caliente company out of Nogales and bound for Sasebo.

To: NormsRevenge
I hear Godzilla is finally defeated by one that is older and uglier... 12 posted on 11/24/2004 8:26:19 PM PST by trashcanbred (Anti-social and anti-socialist)
[ Post Reply | Private Reply | To 1 | View Replies]
To: bullseye876
To be replaced by the dreaded monster that ate, whilst it was steaming in the Sea of Japan, the entire cargo ship full of bean burritos manufactured by the Frito Caliente company out of Nogales and bound for Sasebo. He is known as Fatuma.

I thought that was Flatulon?

I've actually tried to watch a Godzilla movie, but just couldn't take it, even in an altered mind state.

I always suspected Godzilla was a little light in the loafers.

"...the staff of the movie are doing their best to make this the best movie..."

Fortunately, they don't have to raise the bar more than a couple inches off the ground to accomplish that.