ABC's instant poll may have given last night's debating edge to Dick Cheney, but a better indicator of the vice president's victory may have been what the media tried not to say last night. On PBS, ABC political director Mark Halperin started insisting that by Friday's second presidential debate, the vice-presidential exchange would seem as distant "as the Peloponnesian Wars." Liberal media gloom resurfaced. Charlie Rose asked Halperin if the race was Bush's to lose. "It is now," said Halperin. ABC's anchors and experts underlined how their poll showing Cheney winning over-sampled Republicans, since more Republicans were watching the debate last night.

Today, you can feel the liberal media trying to pull down the Cheney effort, noting strongly that Cheney and Edwards have met before, in contrast to what Cheney said last night, even digging up video from 2001. But they replay Edwards's saying Cheney voted against Meals on Wheels for senior citizens without making any attempt to find that roll call. If the dominant media were firmly on the right, instead of the left, they would have found John Edwards callow, plastic, and too negative — especially in his constant refrain that, unlike Bush-Cheney, his ticket would "tell the American people/tell the world the truth." They would have mocked Edwards's constant good-puppy invocations of the virtues of John Kerry's strength and backbone, and mocked the way he made verbal slips, like when he said Kerry the prosecutor was "putting people behind crime, er, behind bars." Edwards was so anxious to sell Kerry that he bungled not once, but twice, the moderator's request that he not mention his running mate by name.

That said, while the debate was sharp and offered voters a great contrast in visions, PBS's Gwen Ifill did not, as a moderator, succeed in asking a slate of strong, challenging questions or maintaining a pose of objectivity. While she did toss some questions at Edwards that reflected the conservative points against the Democratic ticket (Would Saddam still be in power if you had your way? Are you naïve to believe France and Germany will bow to you? What qualifies you to be a heartbeat away from the presidency?), she more often went soft on challenging Edwards. She asked Edwards if the U.S. was "absent" from Israel. She asked Edwards if he feels "personally attacked" as a trial lawyer by the Bush team. (This is especially soft, considering how Edwards's presidential campaign was very dependent on trial-lawyer donations.) She asked a vague question about the quality of intelligence: "Do you think that, in the future, that your administration or the Bush administration would have sufficient and accurate enough intelligence to be able to make decisions about where to go next?"

The worst example of a pro-Kerry bias was the last question to the senator: "Flip-flopping has become a recurring theme in this campaign, you may have noticed. Senator Kerry changed his mind about whether to vote to authorize the president to go to war. President Bush changed his mind about whether a homeland-security department was a good idea or a 9/11 commission was a good idea. What's wrong with a little flip-flop every now and then?" If that's not a Kerry-helping question, I don't know what is.

The worst question of the night (directed at Cheney) was the one Edwards stumbled over: "Without mentioning them by name at all, explain to us why you are different from your opponent, starting with you, Mr. Vice President." One test of a bad question is whether the candidates easily sidestep it to make other points. This question was the journalistic equivalent of "Go ahead, say whatever you want."

Ifill threw more hardballs at Cheney, starting with the obvious, liberal-media-hyped story about Bremer's feeling there weren't enough troops in Iraq. While she carefully read John Kerry's answer about a global veto from the last debate, she didn't try to clarify and read Bush's recent remarks to the voters: "When the president says that Senator Kerry is emboldening enemies and you say that we could get hit again if voters make the wrong choice in November, are you saying that it would be a dangerous thing to have John Kerry as president?" She also stressed GOP personal attacks by challenging Cheney to say that Edwards, "sitting here," is part of the litigation problem.

Liberals were especially happy when Ifill asked, "Mr. Vice President, in June of 2000 when you were still CEO of Halliburton, you said that U.S. businesses should be allowed to do business with Iran because, quote, 'Unilateral sanctions almost never work.' After four years as vice president now, and with Iran having been declared by your administration as part of the Axis of Evil, do you still believe that we should lift sanctions on Iran?"

Ifill did not ask Edwards a question that quoted him from 2000, or any other year. She could have used an Edwards quote criticizing Kerry, or an Edwards quote attacking tort reform. She failed.

Ifill's tiresome, obligatory inquiry about Cheney's liberal position on "gay marriage" — reciting his own quote about "freedom means freedom for everybody" — was a liberal question, one that assumed the administration is against "freedom for everybody." While Ifill did ask Edwards if the Democratic ticket was "trying to have it both ways" by saying they oppose "gay marriage," there was no assumption that they're anti-"freedom," and certainly no assumption (God forbid!) that they're too permissive or pro-sin.

The obvious question Ifill should have asked is one about Kerry's recent interview to a gay press outlet, in which he insists that there are parts of the 1996 Defense of Marriage Act he now supports, such as letting states deny same-sex "marriages" — although of course he was one of the few who voted against it. Once again, he voted against it before he was for it. If you scroll down through the interview, you'll find "anti-gay marriage" Kerry comparing the issue to the 1964 Civil Rights Act, as a desirable goal to achieve in time, starting with his "bully pulpit."

Conservatives and Republicans ought to be watching these moderator performances and questioning why they have allowed the Commission on Presidential Debates to choose only liberal journalists who put Republicans on the defensive and ask Democrats if they feel "personally attacked." James Baker does not look like a negotiating genius on this score. Why? Because the liberal media are so intimidating that the Republicans don't dare insist on a Brian Lamb or a Brit Hume for even one debate, for fear of the liberal media's punishing them in the daily headlines and soundbites. When the race is tight, it makes Republicans look like they're not afraid of Saddam Hussein — but are afraid of Dan Rather.

TOPICS: News/Current Events; Politics/Elections
KEYWORDS: vpdebate Navigation: use the links below to view more comments.
first 1-20, 21-40, 41-60, 61-79 next last
Spot on analysis. Why can't we have Brit Hume moderate a debate? James Baker did the Bush campaign no favors with his negotiations. I thought Gwen Ifill did a pretty good job, but it was in contrast to Jim Lehrer's job last week, which was biased and awful. At least both candidates received hard questions.

Do the moderators decide what questions to ask???

Don't be mean to the girl.

In all seriousness, how do you like the Dims saying that Cheney was "mean?" Mean! These are the people who say they can fight a better war, because they "have a plan," yet, they whine every time W or Cheney does anything other than kiss their yellow butts.

The moderators get to decide the questions. They also, I'm noticing from last night, get to allow lawyers to retry their answers over and over again until they're done with their talking points.

"Uh, can I answer that after I go back to what he just said?"

My only complaint about Ifill (as opposed to Lehrer who I could go on about forever) was that she asked edwards LEADING questions...
Hell... one of the questions went on so long, I thought she had started to answer FOR HIM... 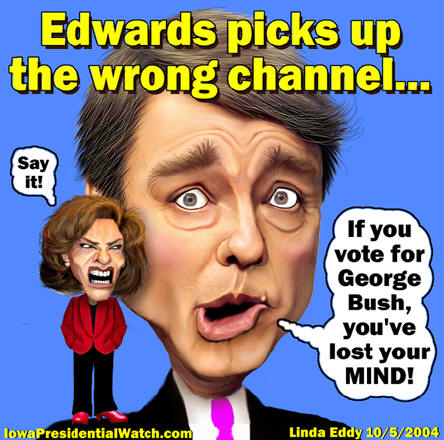 I just laugh when I hear Dick Cheney described as 'mean.' Yeah, he's mean like a father who nails their son in a lie, is always prepared with facts, and doesn't suffer fools gladly. I love the curling lip smirk he has, shows utter contempt subtly.

"I thought Gwen Ifill did a pretty good job, but it was in contrast to Jim Lehrer's"

I agree with you. I thought she was fair with her questioning. I didn't particularly care for Brit Hume's comment re: Cheney looking old, felt that was uncalled for and never heard that mentioned in the derogatory fashion
which Hume used. Surprised me. Cheney was great.

I agree, Gwen was better than Jim Lehrer, but still not as objective as a true moderator should be. The first thing she did that bugged me was letting the Silky Pony "rebut" before she ever granted him his 30 seconds. He just started talking, and she should have said, "Wait a minute. I didn't say you could respond." Of course, she would have been voted off the MSM island for such a faux pas had she actually stuck to the rules to the Hairdo's detriment.

I didn't see the debate but followed the thread here. Most Freepers thought that Ifill was reasonably fair. In fact, she was extremely fair for a liberal. She at least tried.

This analysis reasonably shows that, even at that, the questions were more favorable to Edwards than to Cheney.

The big joke is that if Baker were able to get someone like Brit Hume to moderate a debate, he would actually be fair. Hume is not a conservative. He only seems so in contrast with almost everyone else in the media game.

To find someone as prejudiced as Jim Lehrer on the conservative side, you would probably have to resurrect Atilla the Hun.

I thought she did a good job. I liked her question about Edward's inexperince. On DU they complain that she is a friend of Condi's. I don't know if this is the case though.

The whole Fox News panel kind of surprised me. Bush and Cheney are carrying an enormous load right now, and I will excuse tiredness. He still beat Edwards with one hand tied behind his back.

Hume is not a conservative? What do you know tht my eyes and ears don't?

The one that got me was when Edwards mentioned John Kerry when he wasn't supposed to, and then was allowed to shrug it off, and then used his name again with a 'well, I've done it before so I can do it again.' What good are rules if they're not enforced?

Gwen was far better than Lehrer.

I went soft on her...what an ugly woman!

19 posted on 10/06/2004 6:41:24 PM PDT by Utah Girl
[ Post Reply | Private Reply | To 11 | View Replies]
To: Utah Girl
Great analysis - I see some bias now that the questions are in print. It seems Ifill would not let Cheney explain Haliburton with a few extra minutes, but she let FlipFlop Jr. continually go back an answer previous questions.

She should have done more research and been better prepared - perhaps some even keeled questions would have been better. I'm surprised she was chosen as moderator.