Iran gave free passage to up to 10 of the September 11 hijackers just months before the 2001 attacks and offered to co-operate with al-Qa'eda against the US, an American report will say this week.

The all-party report by the 9/11 Commission, set up by Congress in 2002, will state that Iran, not Iraq, fostered relations with the al-Qa'eda network in the years leading up to the world's most devastating terrorist attack.

The bipartisan commission has established that between eight and 10 of the September 11 hijackers, who had been based in Afghanistan, travelled through Iran between October 2000 and February 2001. The terrorists in question are believed to have been the "muscle" - hired to storm the aircraft cockpits and overpower crew and passengers.

Iranian officials were instructed not to harrass al-Qa'eda personnel as they crossed the border and, in some cases, not to stamp their passports.

According to testimony received by the commission - based on information from prisoners at Guantanamo Bay and about 100 electronic intercepts by the National Security Agency - an alliance of convenience was established between the Shia Muslim Iranian leadership and the Sunni terrorist organisation, well before September 11, 2001.

The report is expected to confirm the claim by Thomas Kean, its chairman, last month that "there were a lot more active [al-Qa'eda] contacts, frankly, with Iran and Pakistan, than there were with Iraq".

It will further inflame tensions between Washington and Teheran, where hardliners are threatening to restart its uranium enrichment programme, a key step towards building nuclear weapons.

A commission official, quoted in the latest edition of Time magazine, alleges that Iranian officials approached Osama bin Laden after the bombing of the USS Cole in 1999, proposing a joint strategy of attacks on US interests.

The offer is said to have been turned down by bin Laden, who was reluctant to alienate Sunni supporters in Saudi Arabia. Nevertheless, in the wake of September 11, Iran sheltered al-Qaeda militants fleeing Afghanistan.

The full report by the commission is also expected to endorse initial conclusions that al-Qa'eda may have been involved in the 1996 bombing of the Khobar Towers complex in Saudi Arabia, when 19 American servicemen were killed. The attack has long been blamed solely on Hizbollah, a Lebanese terrorist group backed by Iran.

Iran was declared part of an "axis of evil", along with Iraq and North Korea, by President George W. Bush in 2002. The report will add to pressure for Iran's theocratic rulers to be the first target of a re-elected Bush administration. Hawks within the administration want a concerted effort to overturn the regime by peaceful means.

Some Bush officials are privately contemplating a possible military strike against Iran's nuclear facilities before Russian fuel rods are delivered next year.

Teheran said yesterday that it had arrested an unspecified number of Iranian al-Qa'eda supporters. 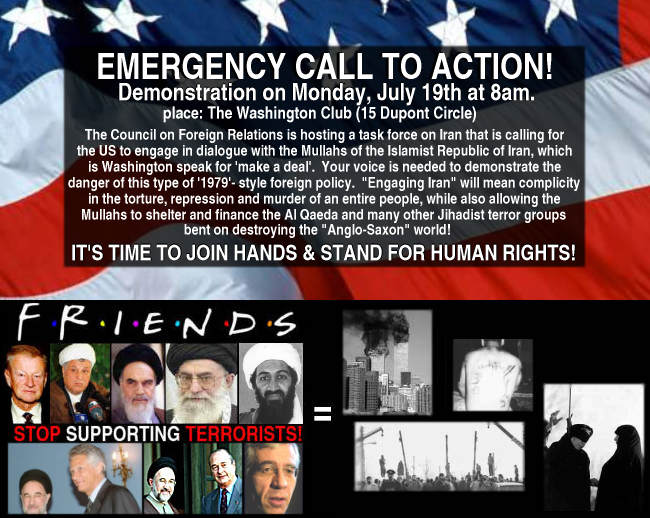 AIN'T IT ABOUT TIME?

Time to saddle up and start another operation. May I suggest we use ALL the weapons at our disposal this time?

Provides ammunition for taking to UN and Security Council.(if need be)

Lets take out the Mullahs - support opposition in country and not hit Iranian people - jesus we Iranians hate the mullahs more than anyone else!

This is what I posted on anothe thread on why we Ivaded Iraq, not Iran::

Because by invading Iraq, we established a western front against Iran

We are in their south in the gulf

we are in their east in Afghanistan

we are in their west in Iraq

We are now in a place to monitor and possible strike against any position in Iran on a moments notice or with little buildup.

My tin foil hat theory of the Iraq war is deeper than terorism of Saddam, it is terrorism of Iran, the world's most prominent supporter of terrorism since 1979.

By now surrounding Iran, we have them in a box.

If we can get a new Afghan Army or the Pakistanis with us, and the Saudis who HATE the Iranians, we will go in in a heartbeat.

God help the Iranian men and women who actually like us. If we do invade, that wont last too long when they see our 'allies' in that war.

There is NO WAY we can invade Iran without a draft, not a chance in the world.

Iran was included in the "Axis of Evil" speech for a reason.

One of the strategic realities of the Iraq campaign is the fact that strong American armored and air formations lie on the Iranian frontier. Iran is basically open to invasion. However, the terrain, especially in the Zagros mountains, can be forbidding in some spots.

Now then; what does this mean politically? A whole can of worms, of course. The Dems will say we aimed at the wrong target (not that they ever intended to do anything against anybody, of course). How and ever, Bush can go back to his 2002 SOU speech in which he defined the Axis Powers and say to the American people that he told them it was going to be a long war, with several enemies.

There is good and bad in this, but there is also clarity.

We are very close to having the casus belli needed to take down Iran's nuclear program.

Checked out your site. Nice. I'll be back.

9 posted on 07/17/2004 6:58:52 PM PDT by nuconvert ( Some people can tell time by looking at the sun, but I've never been able to make out the numbers)
[ Post Reply | Private Reply | To 6 | View Replies]
To: nuconvert
Provides ammunition for taking to UN and Security Council.(if need be)

The following is not quite the hot smoking gun required in lieu of the lukewarm reception the UN generally gives Anglo warnings:

"Bin Laden's representatives and Iranian officials discussed putting aside Shia-Sunni divisions to co-operate against the common enemy."
The offer is said to have been turned down by bin Laden, who was reluctant to alienate Sunni supporters in Saudi Arabia. Nevertheless, in the wake of September 11, Iran sheltered al-Qaeda militants fleeing Afghanistan.

Something about this just does not compute.

10 posted on 07/17/2004 7:01:29 PM PDT by harrowup (Just naturally perfect and humble of course)
[ Post Reply | Private Reply | To 4 | View Replies]
To: faludeh_shirazi
"Lets take out the Mullahs - support opposition in country and not hit Iranian people - jesus we Iranians hate the mullahs more than anyone else!

Iranian "people" chose their fate in 1979. They went from a prestigious monarchy to a militant, islamic nightmare. Democracy alone will not cure your country's ills. You must remove ISLAM as well as the MULLAHS.

11 posted on 07/17/2004 7:07:31 PM PDT by Windsong (FighterPilot)
[ Post Reply | Private Reply | To 5 | View Replies]
To: faludeh_shirazi
I worked as a Bush team member at at mall close by my hometown today, registering republican voters. An older man and his wife stopped by, as it was his wish to change parties from democrat to republican. They both had heavy accents, and looked of middle eastern ancestry. They said they were from Persia, and had immigrated to America in 1986.
They were very dear people, and told me during their brief visit to the booth of the horrible things that befall average Iranian citizens in their homeland. Before we go off on some massive bombing sweep of Iran, think about people like these, who haven't been as fortunate, still stuck in that hellhole.Also, they said it wouldn't be surprising at all to observe a civil war there in the near future. Maybe we can help the decent folks of that land to overthrow an oppressive system without risking so many of our own fighters. Just yesterday I had the "just nuke 'em" mentality..... I feel very different now.
12 posted on 07/17/2004 7:09:11 PM PDT by ScudBud
[ Post Reply | Private Reply | To 2 | View Replies]
To: faludeh_shirazi

ahm and lets leave reporters behind this time

I saw the Big Picture early on, when Iraq followed Afghanistan. Notice how Iran and even Syria is surrounded!

One flaw; otherwise your strategy is perfect: Russia, if I am not mistaken has signed a recent pact with Iran. If so we cannot use their bases.

Thanks for sharing that.
Some forget that the regime does NOT represent the people. The Iranian people are victims of the regime. It's important to distinguish between the population and the government of Iran.

Actually = I'm catholic, so I guess it's the name of my savior as well ehh? Every met an Iranian Catholic? They exist..