Baseball/Softball size hail around today too. At noon and again around 5:30ish. Local volunteer fireman were called out to spot. They saw those tornados. Apparently there were 3 of them. It was on the ground then around Rolfe. Girlfriend-in-law's dad is police chief and she said she heard over the radio that one of the sherriffs deps got too close and the tornado took off the lights on his car!! Whoops!

quite the storms around here i am in algona and have sister in Humbolt and sis-in-law in rolfe === tried both cell phones but no answer yet - hope all are ok.sounds like Rolfe got hit real badas did Bradgate-- it is said that there are no trees standing there

21 posted on 05/21/2004 6:31:48 PM PDT by barryselby
[ Post Reply | Private Reply | To 18 | View Replies ]
To: curlewbird
Your post reminded me of the sheriff's deputy in Oklahoma who found the baby after she'd been ripped from her mother's arms. I saw the video tape from his dash camera only once - would love to be ablt to find a copy of it - but went searching and found a couple stories about it.

Anyway, the point of my post (my gosh, I'm rambling, I must be getting old) - is to say how in awe I am of our LEOs and firefighters who go out into the worst weather to keep an eye out for us. 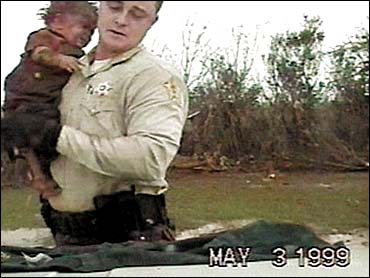