Speaker of the House, Johnnie Byrd to introduce “Terri’s Bill”

Send this alert to School Teachers, Preachers, nurses, friends, politicians, all media sites, everyone in the world!!!!! WORK HARD TONIGHT!!!!! Please urgently request that this bill be passed.It could save Terri's life Terri has been without food for 5 days now, she is hanging on, DONT LET HER DOWN. Save humanity from itself!!!!!

Speaker of the House, Johnnie Byrd to introduce “Terri’s Bill”

Clearwater, FL October 19, 2003: The Governor of Florida, Jeb Bush, has called a special session of the Florida Legislature for Monday, October 20, 2003.

At that time, Florida’s Speaker of the House will introduce “Terri’s Bill”. By Florida law, two thirds majority vote are required to have a topic entered.

Volunteers with the Terri Schindler-Schiavo Foundation have learned that Senate President, Jim King is against this bill.

Here is a good link one of Terris friends provided to make emailing Florida Govt. http://home.tampabay.rr.com/ourplace/Biker/senemail.htm

TOPICS: Activism/Chapters
KEYWORDS: schiavo; terri Navigation: use the links below to view more comments.
first 1-20, 21-40, 41-60, 61-62 next last
1 posted on 10/19/2003 7:08:32 PM PDT by wisconsinconservative
[ Post Reply | Private Reply | View Replies]
To: wisconsinconservative
The Admin moderators pulled an earlier posting of this item, because it hadn't been announced officially or by the media. 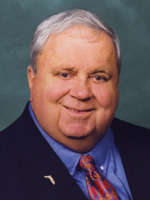 Jim King needs to go without a feeding tube for a few weeks.

To: Cicero
Lucianne.com has a rule about all postiings being linked to a recognized news source.

To: BlessedBeGod
The Governor apparently has nothing to do with this, sadly.

The special session was called for financial reasons, not for Terri.

To: Notwithstanding
I thought only the governor could call a special session.

You are saying that at FR there can be no threads highlighting press releases of activist organizations?