Hannity is a snake - that I believe !

Wood is a nut.

Interesting article. I think everyone here should read it.

I agree, why don’t they have Wood on the air to clear his name. I for one, am glad to hear that he was not involved in the strategy to keep Rittenhouse in jail.

Wood says some things about Hannity that are hopefully untrue.

I think Hannity like all of us believe the 2020 election was fixed, but it looks like no one is looking at the ballots themselves. I keep hearing that they were fakes many of them, but where’s the truth?

I believe that mail in ballots were sent in just prior and during and maybe even after the election. The mail ins should have had a cut off date.

So you have millions of fake ballots coming in at the last minute only with Biden’s name?

Anyway, from what we’re seeing now, the country will be wanting Trump back if it continues as it has.

I can’t understand how Joe Manchin remains a democrat.

Lin Wood is a snake, a nutjob, and a genuinely bad person.

From God’s mouth to my ears.

Wood has always voted for RATS, the party of EVIL. Good men DO NOT vote for and enable/promote evil.

I agree 100%. We create this cult of personality that opens us up to opportunists like Lin Wood.

The same happened to the Tea Party where so many we supported turned out to be opportunistic snakes that stabbed us in the back after their election.

This is why a third party will not fix anything...the same snakes will infest it over time.

Evidence was there something was amiss with Wood. Some of us here tried to point it out and got absolutely lambasted. Wish i could remember the lawyer here who predicted early on that wood was
Going to lose his license.

I brought up the lawsuit against him that clearly showed something was going on with him mentally.

Kyle has said he supports BLM , threw Wood under the bus , and now the Proud Boys as well . Hmmmm....

Lin Wood is all about the money. That’s why he hitched his wagon to the Trump mobile.

Yup. Sleaze ball grifters like Wood know all the red meat lingo to toss out that will be greedily eaten up by the easily misled.

His only true test is if he likes sushi, or not. :)

18 posted on 11/25/2021 3:37:57 AM PST by BiglyCommentary
[ Post Reply | Private Reply | To 15 | View Replies]
To: mountainlion; All
Lin Wood is an expert and deals with the government/legal treachery constantly. Anything the demonicrats can think up they will do to divide and destroy good people.

Exactly. When one of our fighters rises up to take on the derp state, what happens EVERY SINGLE TIME. The derps (CIA) set out to destroy them and their credibility. To cut them off from the very people they're fighting for, us, and this country.

Psyops is their job. 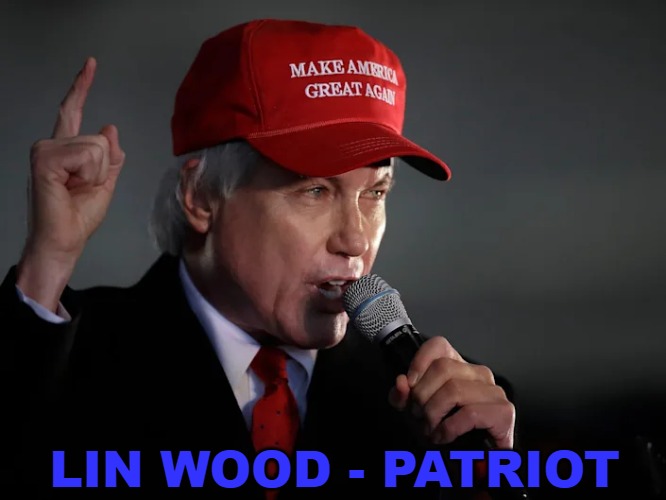 They are very successful at this game. Look at this thread, for example, and the number of good Freepers that have cut Lin Wood loose. They don't realize they were manipulated to do so, but here we are.

“I was in jail for 87 days, and this goes—this follows in with Lin Wood, who—Lin Wood was raising money on my behalf, and he held me in jail for 87 days, disrespected my wishes, put me on media interviews—which I should never have done, which he said, oh, you’re going to go talk to The Washington Post, which was not a good idea,” he said. “Along with John Pierce, they said I was safer in jail instead of at home with my family.”

Rittenhouse, in all of his 18 years, owes Lin Wood a big fat thankQ. Wood understands, unlike Rittenhouse, that his case was won in the court of public opinion. Without the spotlight and support of millions of right thinking people, wee Kyle would be doing life without. SHU unit, nukka. 23 hour lockdown.

Wood put him in front of America and made him a household name. The derps would have tried him in relative obscurity and railroaded the F outta him. The Wood strategy put enough pressure on the judge, jury, and attornies that his innocence was too obvious to ignore.

Whoever got into Kyle's head has misled him. And then there's this.... 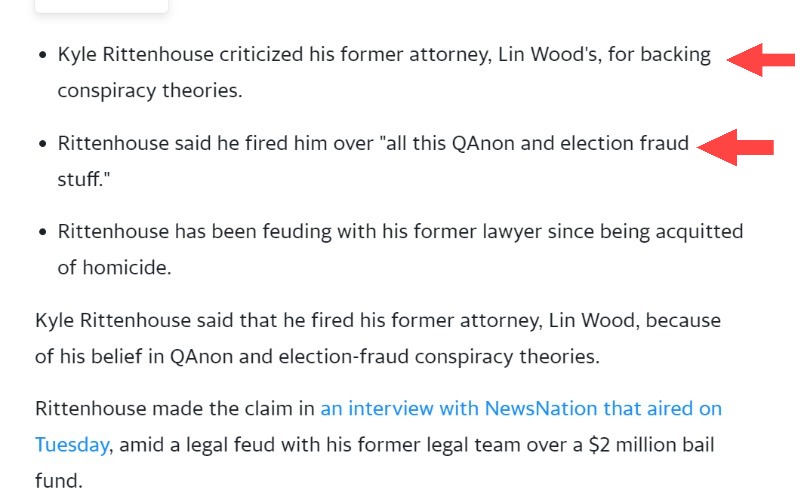 Kyle suffers from the same indoctrination and psyop that many here on FreeRepublic.com do. He let the derps mold his mind against Trump's Q operation AND even the election steal.

He only sees what he can see in front of his face. BLM, Antifa, riots, and the nasty, evil street soldiers of the derps. He cannot fathom what is behind it or it's purpose.

I don't fault the kid for that, though I do regret he's being used to further delegitimize Q and Wood, our own true soldiers. Same goes for many here (you know who you are).

No he didn't. Pause for a moment and consider 'who made you think that'?