After the 2016 signing, it was announced a couple of weeks later on October 18,Broward County Public Schools was the only large urban district in the country to receive a Teacher Incentive Fund (TIF) grant from the U.S. Dept. of Education totaling $53,808,909.

POLL: Who is most responsible for the Parkland shooting?

The NRA
The gunman
I’m not sure

Lots of fake ways to make crime statistics look better than they are... too bad we don’t have a national organization that could expose this stuff...

We have something better, Trump with a Twitter feed. 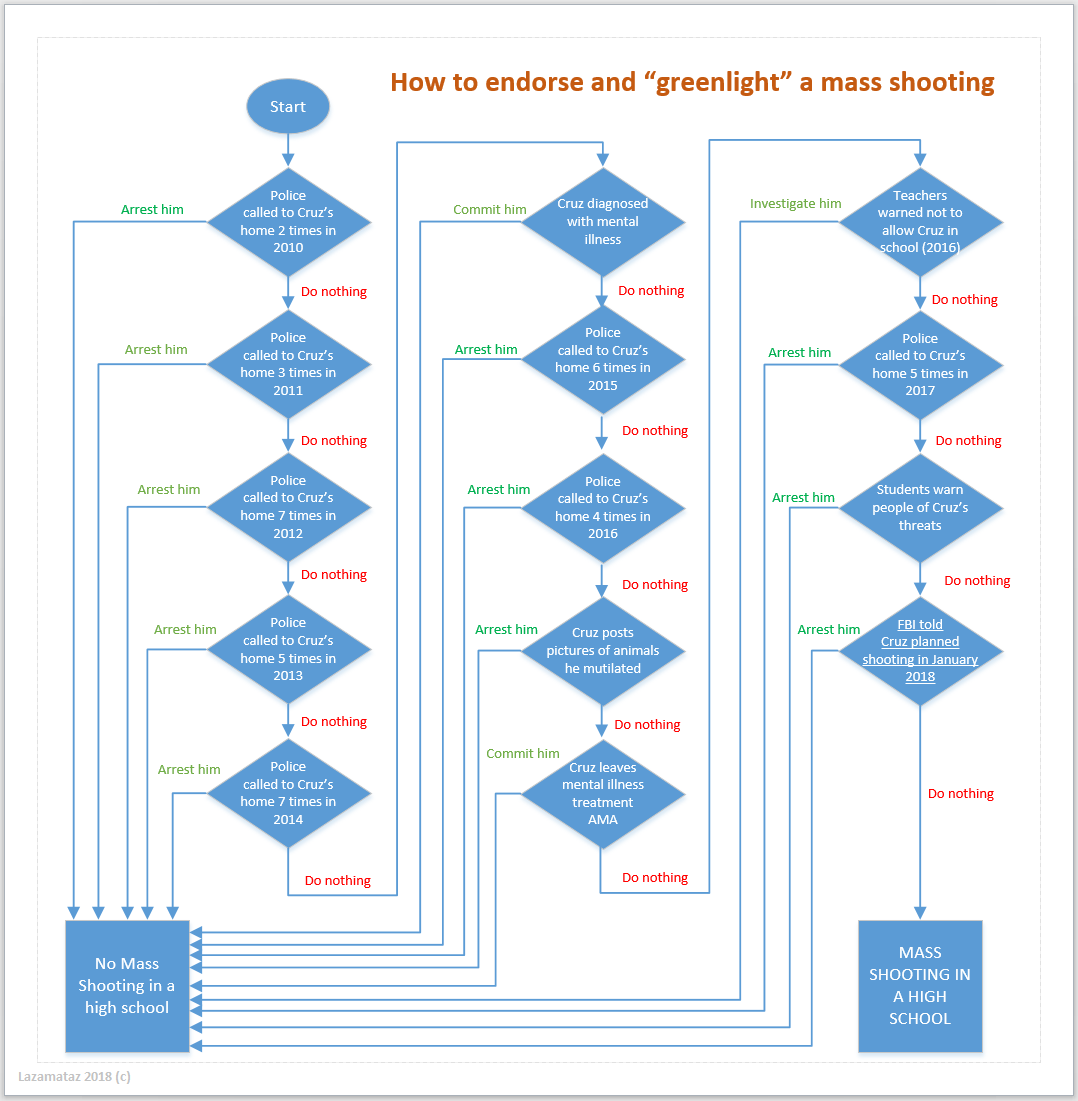 None of the above. It was the AR.

Surprised the blame to the NRA is so low at 34%.

And if this agreement and ones like it are left in place, it won’t matter if there is a more comprehensive background check legislated because the necessary information will never be entered into such a system.

8 posted on 02/28/2018 10:50:04 AM PST by Truth29
[ Post Reply | Private Reply | To 1 | View Replies]
To: robroys woman; Cats Pajamas
The arrogant betrayal of the fundamental duties of law enforcement, here, is only exceeded by utter stupidity of anyone actually thinking this approach would be socially beneficial.

One would be very hard put to even conceive of a better way to destroy any incentive to good or decent behavior by the intended beneficiaries of this agreement.

His fellow Democrats in the afflicted County must be complete imbeciles—if not outright traitors. “Stupid is as stupid does.”

11 posted on 02/28/2018 11:13:43 AM PST by Ohioan
[ Post Reply | Private Reply | To 10 | View Replies]
To: GOPJ; Jane Long; HarleyLady27; RitaOK; DollyCali; Tennessee Nana; sickoflibs; TADSLOS; AuntB; ...
The announcement came October 18, 2016 Broward County P/S/D was the only large urban school district in the country to receive a Teacher Incentive Fund (TIF) grant from the US Dept. of Education totaling $53,808, 909 . One of the TIF's grant priorities is listed as "improved life for students in poverty/students of color."

WE NEED TO KNOW WHO AMONG THE SIGNATORIES CONTRIBUTED

<><>to the tax-exempt Obama Foundation, and,

<><> to the billion-dollar Obama Presidential Center in Chicago said to be built on donations only.

WHAT?! What do you mean my videos/messages have been deleted?!

13 posted on 02/28/2018 11:25:41 AM PST by philman_36 (Pride breakfasted with plenty, dined with poverty and supped with infamy. Benjamin Franklin)
[ Post Reply | Private Reply | To 12 | View Replies]
To: Liz
Broward County's distinction--which you point out--is truly something out of Gulliver's voyage to Laputa, if you are familiar with the Swift classic. Only someone incompetent or pernicious would fail to see the utter stupidity in making certain that wayward youth never have to face the consequences of their misdeeds.

Consider, instead, the wisdom of the Founding Fathers on subjects related to an armed citizenry. It is the difference between night & day, good & evil; rational & utterly insane.

The blame and responsibility lies clearly with government institutions dominated by Broward County Democrats. Their failure to remove a dangerous and imminent threat to an entire school resulted in a school massacre. Allowing students to break laws has consequences, and this sanctuary discipline agreement created by government employees did exactly that:

COLLABORATIVE AGREEMENT ON SCHOOL DISCIPLINE -NOV 5, 2013
THIS AGREEMENT entered into between:

and in collaboration and consultation with a committee of stakeholders that include representation from the Broward Teacher’s Union, Broward Principals’ and Assistants’ Association, District Advisory Council, Diversity Committee, Children’s Services Council of Broward County, State Representative Perry Thurston, State Senator Christopher Smith, and State Representative Gwyndolen Clarke-Reed for the purpose of establishing a cooperative relationship between agencies involved in the handling of student misbehavior.

No wonder Nikolas Cruz was never held accountable for his criminal behavior, he’s being educated in a zoo.

1.01 Student Misbehavior: breaches of the Code of Student Conduct, disruptions, and other transgressions or omissions by a student that occur on school grounds, school transportation or during a school sponsored or related event.

1.02 Non-Violent Misdemeanors include, but are not limited to:

Disrupting or Interfering with a School Function;

Since the sheriff’s been lying to us, the numbers on Cruz’s home visits need to increase. Last I heard, it’s up to 43 BSO deputy visits.

And everyone of those you list should be held to account for this. I do not want to be alarming, but there can be no doubt but that Cruz was not the only miscreant further damaged by the insane program. The others may not act out in the same manner, but there have probably been many lesser crimes committed by those similarly coddled as a result of the crack-brained agreement. (The classic ‘spare the rod & spoil the child0 effect.)

The problem is easy to see when you watch the video below. The problem is that conservatives/Christians see man as basically bad and in need of constrainment whereas liberals/evolutionists think that man is basically good and should be free to show that it is true. History proves the former is correct and the latter is dead wrong: