Navigation: use the links below to view more comments.
first previous 1-20, 21-29 last
To: wagglebee

Les poissons, les poissons
How I love les poissons
Love to chop and to serve little fish
First I cut off their heads
Then I pull out their bones
Ah mes oui, savez toujours delice

Les poissons, les poissons
Hee hee hee, haw haw haw
With a cleaver I hack them in two
I pull out what’s inside
And I serve it up fried
God, I love little fishes, don’t you?

Zoot alors, I have missed one!

Sacre bleu, what is this?
How on earth could I miss
Such a sweet little succulent crab
Quel Domage, what a loss
Here we go, in the sauce
Now some flour I think just a dab
Now I stuff you with bread
Don’t worry, ‘cause you’re dead!
And you’re certainly lucky you are
‘Cause it’s gonna be hot in my big silver pot!
Tout-aloo mon poisson
Au revoir

Give them a shot of sourmash and a blindfold, at least!

25 posted on 06/18/2007 10:01:23 PM PDT by grey_whiskers (The opinions are solely those of the author and are subject to change without notice.)
[ Post Reply | Private Reply | To 14 | View Replies]
To: cardinal4
Just imagine the tiny crustacean screams as the Old Bay seasoning gets in their eyes! 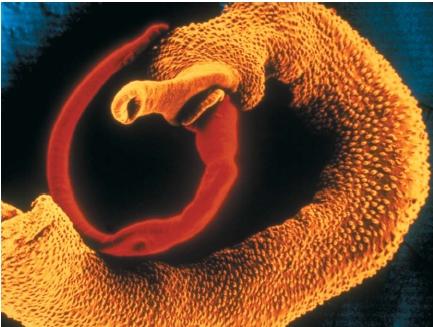 "At first glance it could be a fire hose, neatly accordioned behind a panel of glass and mounted on a wall. As the wall is in a museum devoted wholly to parasites, however, you have the unsettling feeling that upon closer inspection it will turn out not be a piece of safety equipment.

"Diphyllobothrium ," says Shunya Kamegai cheerfully. Kamegai, a parasitologist, is the director of the Meguro Parasitological Museum in Tokyo. Diphyllobothrium is a tapeworm, in this case a 24-foot-long tapeworm. Kamegai speaks English, but you almost wish he didn't. Then you wouldn't know this tapeworm lived in a 40-year-old sushi eater. You wouldn't know what the man's doctor had to do to evict the specimen in one long museum-quality piece. You wouldn't know that it grew 20 centimeters a day in the man's belly."

"I'll have mine well done, thanks."

28 posted on 06/18/2007 10:16:38 PM PDT by Daffynition (Label Warning: Formerly known as "rainbow sprinkles")
[ Post Reply | Private Reply | To 24 | View Replies]
To: wagglebee
They sure wouldn't approve of the way my diving buddies and I liked to prepare the fish we speared. We would build a fire among the shore rocks before the dive. Spearing the fish put holes in them, but they were still very much alive by the time we reached shore, where we inserted out dive knives into their anuses, ripped their bellies open, rinsed out their guts, shish kebabed them on the spear shafts, and hung them over the fire before they even had a chance to think, "What the...?"