Michael Bloomberg sent up a trial balloon on Saturday that should have us all very, very concerned. Mini-Mike had one or more of his lieutenants tell the Drudge Report that he is interested in picking the Pantsuit Princess to be his running mate should he win the Democrat Party’s presidential nomination. This is a very ominous sign that the entire Democrat Party is still working to install the most corrupt politician in American history in the nation’s highest office.

Regular readers here will know that I don’t believe Mr. Bloomberg is really interested in serving four years as President. The man is 78 years old, would be 79 a few weeks following his theoretical inauguration, and appears to have all the energy of the average tree sloth.

What he does have, though, is dollars – billions upon billions of dollars. Meanwhile, the Democrat National Committee is flat, dead broke. Its fundraising flat-lined over the last three years and it is deeply in debt, negating its ability to pour money into the campaigns of vulnerable Democrats in house and senate races.

Bloomberg hates Donald Trump from way back, and agreed to a plan to step in to fill the funding void left by the DNC’s absence of money. The most cost-effective way for Mini-Mike to do that is to declare himself a candidate and run hundreds of millions of dollars of anti-Trump TV and social media ads. Being a “candidate” allows him to qualify for preferential ad rates offered by the media to politicians, and allows him to pour as much of his personal fortune as he wants to without restrictions that apply to contributions to political parties or PACs.

Don’t get me wrong: Bloomberg wants to win the election, and he has deployed his billions to build out what is becoming a massive political operation that is going to allow him to buy an awful lot of votes on Super Tuesday, out of which he will almost certainly emerge as the only legitimate challenger to a takeover of the Democrat Party by The Commie, Bernie Sanders. But he just doesn’t have any intention of serving out a term in office.

Bloomberg has long been tied in with the Clintons and their despicable friends like Harvey Weinstein and Jeffrey Epstein, and has obvious reasons to want to ensure that President Trump does not win a second term in office. He has also profited immensely from globalism and all the unbalanced trade agreements that Trump is in the process of ending, and thus has a compelling personal financial interest in helping to execute a return to the old world order.

What better way to do that than to serve as the stalking horse for the Coughing Crook? Pick her as a running mate, win the November election, get sworn in and shortly thereafter develop some “health reason” for resigning. Suddenly, you have executed the Democrat Party’s four-year effort to reverse the results of the 2016 election and ensured the quick death of the American Republic.

So, the “leak” to the Drudge Report was likely just Bloomberg and the Democrats testing the waters to gauge the reaction by the pundits and the public. This first step will allow them to poll and focus group test new messages designed to build acceptance for such a ticket in the public’s collective mind.

You can expect both the Bloomberg camp and the Fainting Felon to start rolling those messages out in the days and weeks to come.

Just in case you don’t believe that The Commie is the clear front-runner in the Democrat race now, look at the results of the new YouGov poll:

If The Commie can find ways to win both Nevada (likely) and South Carolina (where only a rapidly-fading Quid Pro Joe might be able to prevail) over the next two weeks, Mini-Mike may not be able to head him off. Waiting until Super Tuesday to get into the race was always a risky strategic move by Mini-Mike. As things stand right now, with Sanders also leading big in California and surging in several of the other Super Tuesday states, it may turn out to have been too late.

Mini-Mike will find out how much logging chain he can swim with... A common problem with people who are between Piaps and the Crown.

21 posted on 02/16/2020 5:55:49 AM PST by jonascord (First rule of the Dunning-Kruger Club is that you do not know you are in the Dunning-Kruger club.)
[ Post Reply | Private Reply | To 1 | View Replies]
To: EyesOfTX
So a Wall Street capitalist is trying to buy the democrat nomination, and the other candidates have the mainstream dems so rattled that they are considering voting for a jewish guy. (At least he's not trying to join their country club.) And he has a list of VP candidates that includes Hillary Clinton.

Do either of them know where Wisconsin is?

Does the list include Pierre Romney as well as Hillary?

Why do they even have caucuses and primaries?
The candidates will just be picked by the the guys in the smoke filled room.

Every day, you think it can’t get any funnier.

Then, you wake up in the morning and find out you were wrong again.

Great point. Perhaps her plan is to be VP and then release a bunch of information on Bloomberg’s involvement in China, which would lead to his impeachment. (if that didn’t work, she could just ‘clintoncide’ him and become President.

Blumboorg is working behind the scenes with the DNC, that was reported on a thread here on FR.

So he’ll get the nomination and with Clinton as VP...

...Bernie bots are going to be absolutely furious.

So expect Bernie to commit “suicide” or die of a “heart attack”.

Otherwise the Berniebots will turn on the dem party forever.

That makes for a very shortlist. 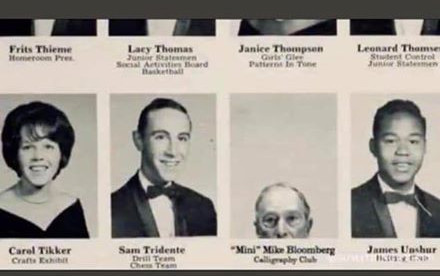 Not if the plan is for him to resign.

Oh. I imagine H put up that trial balloon. She needs to be in the WH.

Mini-Mike may try this. A blast from the ancient past.

“On March 28th, 193 AD, the Roman empire was auctioned off by the Praetorian guards to the wealthy senator Didius Julianus for the price of 6250 drachmas per soldier. ... After outbidding Sulpicianus, Didius Julianus was named emperor, and he received an oath of allegiance from the guards.”

At least Hadrian got the money to build his wall.

I have a feeling this has been in the works from the beginning. This is the ‘Back Room’ at work.

He might have to commit suicide, which is Hillary's weapon of choice.

See my #4 - Bloomberg and Hillary are co-ordinating so she ends up President.

Bloomberg is a billionaire - he is no fool!

39 posted on 02/16/2020 7:08:00 AM PST by mylife (The Roar Of The Masses Could Be Farts)
[ Post Reply | Private Reply | To 1 | View Replies]
To: stonehouse01
Mini Mike has a real problem trying to win the national election. He might not even win his home state of New York. He will lose the majority of Sanders supporters after he buys the nomination from Bernie. I don't know why people are so scared of mini Mike. He has no personality and he is an out of touch billionaire. I think president Trump will know how to beat midget Mike.
40 posted on 02/16/2020 7:11:04 AM PST by Rdct29 (Democrats are the new Nazi's. They think they deserve total control over the people)
[ Post Reply | Private Reply | To 4 | View Replies]
Navigation: use the links below to view more comments.
first previous 1-20, 21-40, 41-58 next last