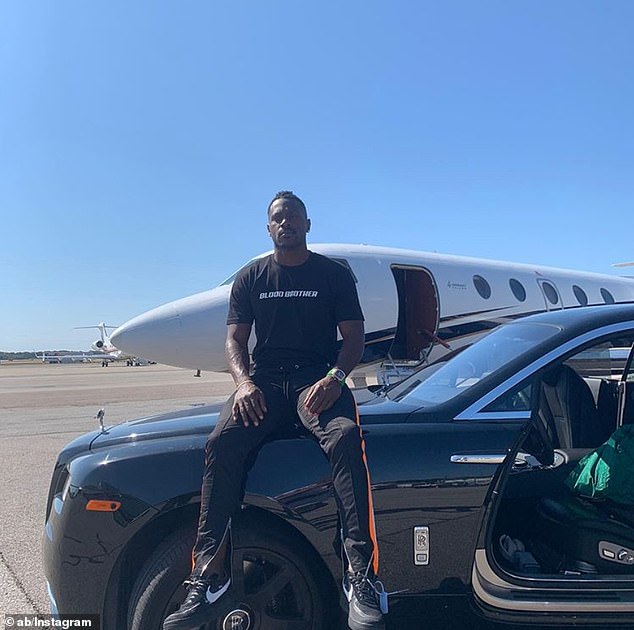 A pampered overpaid jock who behaves badly and has the couliones to bitch and moan about being unfairly treated, while he rolls in a Rolls. Just something that strikes me as disingenuous. If he does end up in prison for sexual assault at least his "skills" as a WIDE RECEIVER might come in handy, if ya get my drift.
1 posted on 09/22/2019 10:52:10 AM PDT by Impala64ssa
[ Post Reply | Private Reply | View Replies]
To: Impala64ssa

It is wrong that he was convicted of rape before his side of the story was told. His accuser is questionable at best.

Yeah, he’s done. But it wasn’t his choice.

He’s already done Dancing with the Stars and the Masked Singer so he’s running out of other employment options.

His texting got him fired.

I was done with the NFL when they did nothing to stop the anti-American protesting.

I checked the current Jets/Pats score on the ESPN website and the Patriots are clinging to a scant 20-0 lead early in the second quarter.

This why I don't regret my decision to stop following the NFL after the whole kneeling ordeal.

No matter who he would have played for, he would be team cancer. Shocked Belashit went ‘Jerry Jones’ to have gotten him. You never go full Jerry Jones with troubled players!

This Monday he would have received a 15 Million dollar signing bonus.

also, its the NFL owners who keep hiring these creeps.....the owners should be held responsible financially for letting so much very bad behavior and attitude get a pass ......

wouldn't it be nice to actually admire sports figures.....I guess those days are gone.

<< I don’t regret my decision to stop following the NFL after the whole kneeling ordeal. >>

Same. Although my interest had been steadily waning for the last 20 years or so. The woke NFL with their pink paraphernalia month and LGBT Pride initiative and kneeling ingrates completely extinguished it.

Is there something in his contract where he violated some bad behavior clause and they don’t owe him anything?

How much is he ending up with?

Good. Go team up with Krapernick and go ruin a company, that’s all your stupid @$$ is good for.

15 posted on 09/22/2019 11:15:24 AM PDT by Excuse_My_Bellicosity (Liberalism is a social disease.)
[ Post Reply | Private Reply | To 1 | View Replies]
To: Impala64ssa
"He slammed Patriots owner Robert Kraft for keeping his job despite being hit with soliciting prostitution charges.."

One cannot be 'fired' from ownership as if it were a job for which one was hired. Also; as creepy as Kraft's alleged behavior may be, it was a consensual transaction. He is not alleged to have raped or assaulted anyone. Apparently Mr. Brown is incapable of making the distinction.

The Patriots released him the other evening

Still only a 20-0 lead and it's getting close to half-time.

I haven’t watched an NFL game in years, and yet even I know this guy has been a stunted misfit who ain’t worth the trouble he brings to an NFL roster.