I am normally smart enough to stay out of my local Costco store on a Saturday afternoon. But yesterday I was out of my allergy meds, planning a visit to my crazy-sweet-cat-lady sister-in-law today and – having a real cat allergy (insert sad face here) - I committed an unforced error: I decided to pick up a few additional items while I was there.  The whole experience was worse than I imagined. The icy parking lot was a nightmare, I had to stalk someone to get a parking spot.  Shopping cart availability was limited to a bring-your-own-in-from-the-freezing-cold-parking-lot and the aisles were a maze and buzz of third world anarchy. Literally.

They were jammed with people who were clearly not born anywhere around here and by “here” I mean the United States. They were driving their shopping carts around in circles, ramming into others as they darted to and fro, speaking in tongues and otherwise creating shopping gridlock. 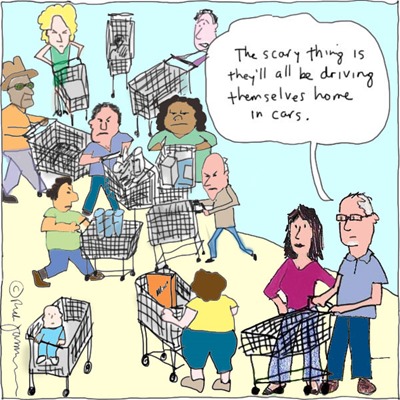 From Rick and Kathy

Of course I’ve seen non-native born shoppers here before, but they seem to own Saturdays. I know my virtue signaling betters will be quick to call me racist for this, but in my judgement the Hindi woman wearing a very lightweight sari covered only with an equally lightweight rain jacket and wearing flip flops on an afternoon that peaked at 16 degrees was not from around here. Nor was the hijab-clad woman with 5 kids all speaking an unintelligible language.

So I did the math (my white privilege) while waiting in the checkout lines solely on the basis of profiling. Using nothing more than my powers of observation I determined that 31% appeared to be either black or white native born Americans. The remaining 69% appeared (and sounded) to be from some place far, far away. Mind you, I’m not drawing any conclusion about the legal status, citizenship, virtue – or lack thereof - of of this huddling mass of humanity. I’m simply stating what is glaringly apparent to anyone paying attention: in my “white suburban” neighborhood the majority of shoppers on this Saturday afternoon in January, 2018 were most assuredly foreign-born. And oddly enough none – none mind you – appeared to be from south of the border. These new immigrant Americans were predominantly Indians, Pakistanis, Asians and too-numerous-to-mention Middle East countries. All here, I presume, to do jobs that Americans won’t do. 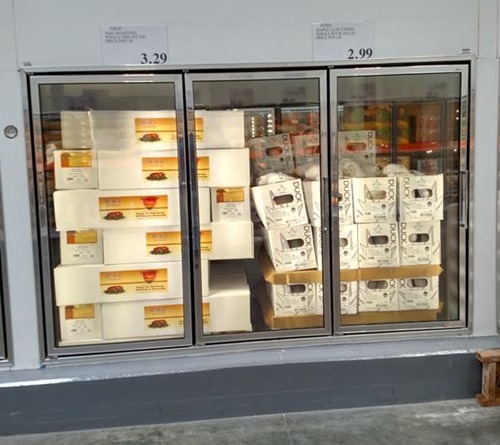 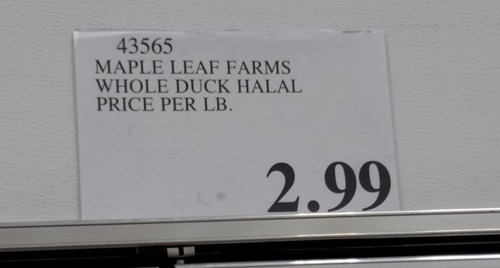 Costco: where whole pigs reside peacefully next to halal ducks

And that, my friends, is why Donald J. Trump is president.

I once worked with a lawyer  who, when he thought we were offering to give away more than we needed to in a business deal would remind us that while our contract terms needed to be legal and ethical in every respect, we were not a church. Some goes for our country, we are not a church; we cannot save the whole world. Acting as if we can do all of God’s work is pure hubris.

When our boys were in school we never got out of COSTCO with a bill under 300 dollars.

(the demonrat party approves of this message)

Ahh...I’m pretty sure folks can get a Costco membership card without any form of “secure ID” or proof (however weak & laughable) of legal US residence.

They know where to shop very quickly and they know where the SS office is too. Bet most of your native working class people don’t know until they retire.

I agree a country is not a charitable organization except as a last resort for its citizens. That’s why immigration CONTROL is so important.

What kind of currency were all the foreigners using?

Whenever I am in COSTCO I play the how many languages will I hear game. It is always at least 4, always. I do avoid it for the most part because for those who don’t know COSTCO is owned by a hard core leftist. Bezos, Schmidt kind of leftist.

..next time you stop..check out the paki family with kids ( two or three)
all wearing backpacks....watch closely... Especially at the check out line...kids work their way around the cashier... waiting for mom and pop...as soon as the family’s done checking out..the kids go on ahead...ideally, walking close behind another family...no one ever checks the backpacks...

Disneyland has a section called “Main Street USA.” I predict that within our lifetimes it will be changed to “Multicultural Marketplace” or some such. Anything “All American” will go away because all the consumers will be foreigners or children of foreigners who have no interest or liking for traditional America.

Where I live, it’s now rare that I hear English spoken with an American accent. We have handed our country over to any foreigner who wants or demands it. The best country in the world, and we gave it away. We committed suicide.

It’s really sad that society has gotten to such a state that you or I must worry, when making a purely objective observation, about who may be champing at the bit to decry the observation as ‘racist.’

I have no facts to back this up but I think Costco makes deals with local groups or churches to give groups 6-week memberships or 2-month memberships. I say this because once there were scores of Indians shopping there, many of whom were dressed in native garb and seemed to be unfamiliar with the place. Another time there were scores of women covered head to toe in burkas. A few years ago, right before Christmas the place was filled with minority families with many totally out-of-control children who were pulling things off shelves and racing around grabbing samples.

Ah, yes, that is exactly what it's all about.

When you reach retirement age and must go to the SS office, you will find you have to stand because the chairs are occupied by enormous women of various shades of brown with at least three children running free. They obviously are not there to claim Social Security benefits from a grateful nation after a lifetime of working. Asked why so crowded, the weary woman helping me said, “Disability.”

What a scam. One might guess they are too fat to do anything but breed more welfare recipients for the shrinking next generation of workers to support. Thanks, LBJ and every Democrat who foisted this “Great Society” crap on the rest of us. What if all of US decided to go on disability?

Oh do I EVER agree!

Same deal different day at our Costco. All the lamb and organic chicken is now halal so we don’t buy it anymore. It looks like Korea and the mideast merged. You feel like a stranger in a strange land.

At Costco i got on line behind a Mexican National. Not even American money, much less language. He argued with the cashier as people lined up behind and all around me. No good way out for me. The guy’s family kept pushing past me piling up more stuff on the counter. Managers, cashiers everyone came out to talk to this guy but he couldn’t talk to them. He had no money. He was getting a red carpet treatment. He couldn’t PAY. It was the longest wait i can ever remember. And for a customer with no money

No one could give a crap about me. Not a cashier or any fellow wimp Texan

It was a Sunday. next day i called to speak with the manager. His attack on me was a tone i remember from being in the desert and we were fighting a real enemy. I had never before or since been yelled at with that level of hatred

The defense San Antonians give to illegals is mind boggling.

But this is an invasion ushered in by idiots

Take a ride over to north Texas, say around north Dallas, and it will be a rare moment to encounter a person(s) speaking English.