Hey Donald, “the girl” can negotiate deals just as well as you! That’s right, if negotiating beneficial terms is a top priority, Hllz is pretty good at it: Hillary Aide Cheryl Mills OK’d Oil Deal That Put $500K In Bill’s Pocket. 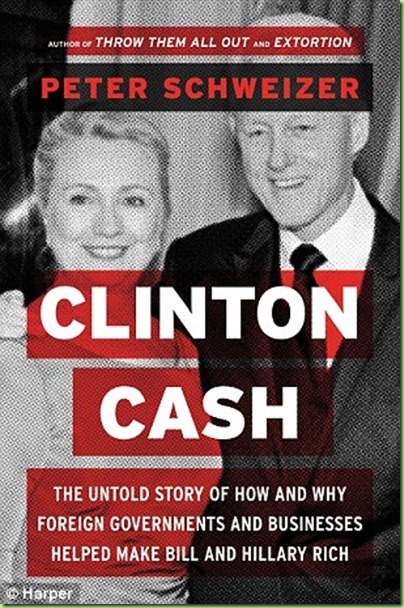 Latest name added to the list of mysterious deaths, Seth Rich - who Julian Assange has insinuated was responsible for the DNC leaks. There’s no double-crossing in Clinton world.

TOPICS: Humor; Politics
KEYWORDS: clintoncash; hillaryclinton; julianassange; sethrich
1 posted on 08/10/2016 5:22:21 AM PDT by NOBO2012
[ Post Reply | Private Reply | View Replies]
To: All
The Clintons scavenged the globe for cash----virtually no place is left untouched by their monstrous greed.

Hillary needs a staff to keep track of the Foundation Rolodex.

“Who’s paid up? How much? OK—let’s answer that email or phone call.”

Read about the deaths of Ron Brown and Vince Foster, both of whom died just before they were to testify in the Whitewater scandal. Suicide, my a$$. The Clinton’s have blood on their hands...multiple times.

4 posted on 08/10/2016 5:34:48 AM PDT by econjack
[ Post Reply | Private Reply | To 1 | View Replies]
To: All
Cited on a no-fly-list, Gilbert Chagoury said he he had regularly traveled to the United States without incident until this January. Given the timing, it appears Chagoury was ensnared by changes in the criteria for the antiterrorism list after Abdulmutallab's failed bombing attempt. The accused bomber grew up in Chagoury’s homeland of Nigeria, and Chagoury said he was acquainted with the suspect’s father, a Nigerian banker.“He has always been a great banker and a very nice gentleman,” said Chagoury of Abdulmutallab’s father, who had gone to the US Embassy to sound an alarm about his son’s possible recruitment as a terrorist before the December attempted attack.

Chagoury has been a supporter of Bill and Hillary Clinton since the 1990s. He has funded their election campaigns and is a major donor to the Clinton Foundation.....pledging a billion dollars (yes, a billion) to the foundation. In 2010, ABC News reported on the U.S. Department of Homeland Security's apology to Chagoury for his detention at Teterboro airport for over four hours because of inclusion on a no-fly list.

<><> The SEC charged a Clinton Foundation trustee with misallocating $9.5M from his database company. Shareholders sued for using the company jet to fly the Clintons around and paying Bill a $3M consulting fee.

<><> A Clinton Foundation trustee was accused of paying Bahraini executives (roughly $52 million) to win sales contracts for US-based Alcoa which later settled with the DOJ for $384M.

<><> A Foundation trustee donated to Hillary's campaigns...gave the Clintons millions in honoraria and millions more to the foundation. The trustee was arrested for allegedly defrauding a bank. He pleaded guilty in a Bklyn court to “funneling more than $180,000 in illegal contributions to three federal candidates,” Hillary among them.

<><> An Indian legislator sat at the head table at the Clinton Global Initiative and dined privately with the Clintons at their home. He gave between $1 and 5 million to the Clinton Foundation....then was arrested for bribing members of parliament WRT a US-Indian nuclear-technology agreement....he was booted from his party, ending his political career.

<><>Claudio Osorio fundraised for Hillary and supported the Clinton Global Initiative. He falsified applications to score a loan of $10M tax dollars to build homes in earthquake-ravaged Haiti. Osorio was convicted of financial fraud, using humanitarian assistance “for personal benefit,” and got 12 years in federal prison.

<><>Gilbert Chagoury was on the federal terrorist no-fly list yet the Nigerian resident, a Lebanese-British businessman, donated $460,000 to Miami Democrats for voter-registration and attended the Clintons WH Christmas party. He was later convicted of money-laundering and “aiding a criminal organization WRT billions of dollars stolen from Nigeria.

His company pledged $1 billion to the Clinton Global Initiative. The ***-kissing Clinton gave him a prize for.....Wait for it....." sustainable development."

They leave nothing to chance.

You should be on JW’s payroll. You have quite a store of information. It must be as frustrating as the devil to compile this and keep track of it all. We all appreciate it.

How do you stand it?

What do you do in your spare time? LOL

I don’t even think about this in my spare time....unless someone brings it up.

Well, when on earth do you have spare time? Your collection of information is so voluminous.. I’ve read volumes about the Clintons since the nineties and I don’t remember much of it but enough to know we are dealing with some very unsavory characters. We retired and relocated from the West Coast to the East Coast 10 years ago and I left all my Clinton books behind!!! I really didn’t expect that we’d be dealing with them forever!!!!