On CNN today, Donald Trump had another moment that is sure to haunt news and social media for days, when he made a comparison between Dr. Ben Carson and child molesters:

Yes, well .. reach better, guy. When a CNBC moderator made a comic book comparison with Trump, the Donald and his fans were outraged. Imagine if that moderator had said this about Trump.

The option they are giving us is that either Trump is too dumb to know comparing pediatric brain surgeon Dr. Carson to a child molester would be outrageous and go viral, or he knew that's exactly what would happen and maliciously made the comparison. That's what we're left with. Dumb or malicious.

Unless you want to chose both.

How to make America great again in one easy lesson:

Repeat often and as necessary and get it right.

Some expected Trump to have class?

Hm...seems like it would be very difficult to be a successful, respected NEUROLOGIST and still be on drugs.

This is the sort of thing that will be used against Trump if he’s the nominee and against whoever the nominee is if Trump isn’t.

You are kidding, right?

Since vast numbers of Americans IQ are a few points above room temp, Trump screwed up big time...

I think most people will find what they perceived Trump said was pretty low and will cost him support...

No, the shot was to his own foot.

This is the type behavior that will unravel his lead.

Trump constantly makes these slips. I support Trump but I wont blindly follow like so many here. Trump’s big NYC mouth is his worst enemy. He may get to the point of no return.

I don’t contend that he is. None within this group of candidates comes close to Reagan’s stature.

Oh my, you are so naive. I worked for doctors for years - and trust me - they ALL self-medicate. Have you ever wondered how some surgeons can stand in surgery for 18-20 hours at a time? They know which meds to take.

Then I would say you have selective sight.

You are right .....I only see what is in front of my eyes

I would think Carson hitting Mom with a hammer is the real point here...

74 posted on 11/12/2015 9:32:16 PM PST by antceecee (Bless us Lord, forgive us our sins and bring us to everlasting life.)
[ Post Reply | Private Reply | To 65 | View Replies]
To: conservativejoy
Much more significant and startling than Trump's comments on specific quotes from Carson's book, were Carson's own comments (see link below), where he said that he would set up a no-fly zone in Syria, and that if any Russian MIGS strayed into that no-fly zone, Carson said he would have them shot down.   (Can we all say nuclear WW-III?) Hitting your own Mom over the head is a horrible, disturbingly disgusting thing to, which likely never even occurred to most people to even think about doing to their own Mom, but nonchalantly saying you are going to casually shoot down any Russian aircraft that violates your arbitrary "no-fly zone" over a chunk of Syrian real estate, as a possibly protective measure for a handful of refugees, may be even crazier.  (As the old saying says, that would be penny-wise and pound-foolish.)

Maybe this really should be Carson's new campaign theme / swan song, as he wisely brings a halt to his impossible quest for the presidency: 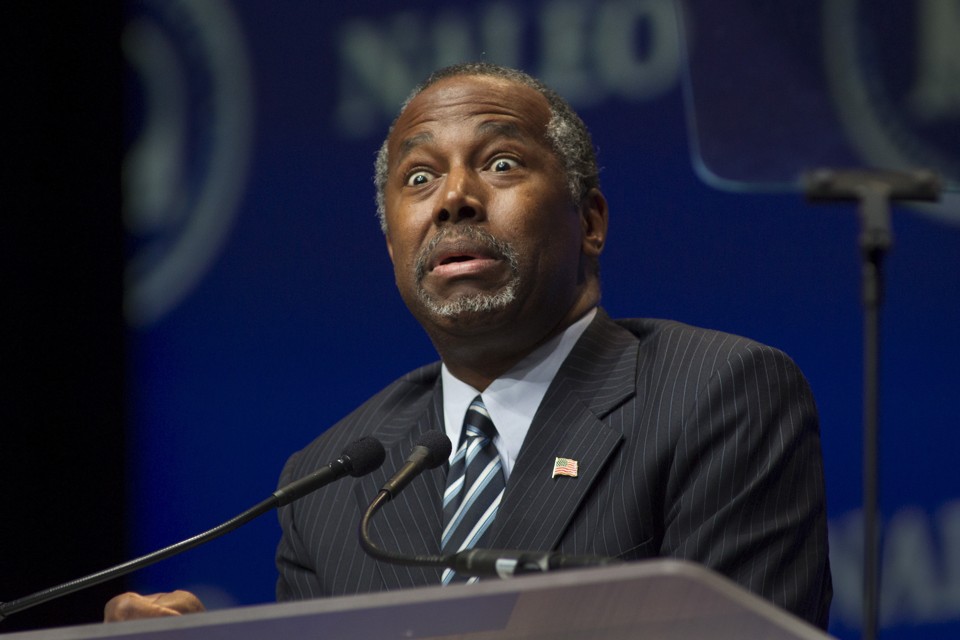 .
Trump is serving notice that he knows that he is toast.
.

.
He gets away with it because he’s the Media’s choice to dismantle conservative America.
.

So is your hero.

.
And Trump has shown that he definitely has serious pathology.
.