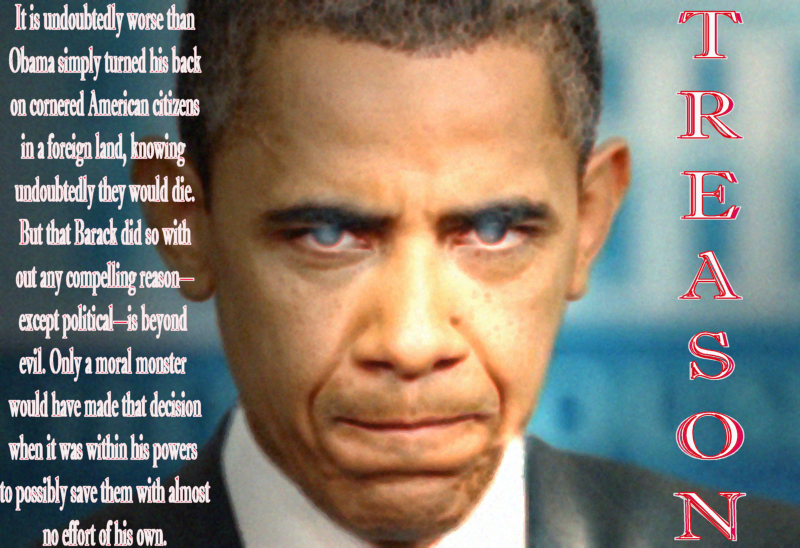 What do you call it when the man holding the Office of the President of the United States thumbs his nose at the veterans of America who have bled, died and lost friends in fighting against threats to the American Constitution and the American people, and yet, supports with weapons and financial aid the sworn enemies of America? I believe it is the dreaded “T” word. However, don’t take my word for it, view the evidence for yourself.

According to the United States Constitution, Article 3, Section 3″

“Treason against the United States, shall consist only in levying War against them, or in adhering to their Enemies, giving them Aid and Comfort. No Person shall be convicted of Treason unless on the Testimony of two Witnesses to the same overt Act, or on Confession in open Court.”

Here is where we start. While not technically a “war” on our veterans, who are a part of the United States, it was clear that Barack Obama was out to threaten them with sheer force, as demonstrated in the video below:

We saw over the past week how Barack Obama has thumbed his nose at our veterans by closing down the war memorials in Washington, and as they stormed DC this weekend, removed the “Barrycades” around the memorials and dumped them in front of the White House, he simply ordered them to be put back up. We’ve seen the distain that Obama has had for our men and women in the Armed Forces. We’ve seen how his administration has left Americans to die in Benghazi and even failed to be discreet about Special Forces, leaking confidential information, leading to the untimely deaths of the elite Navy SEALs aboard Extortion 17. There are some who believe the leaking of that information was an act of treason on the part of the Obama administration.

While Obama closed memorials for our veterans, he allowed law breakers and their sympathizers to organize on the National Mall and demand we change our laws to accommodate their lawlessness.

The Constitution also mentions “aid and comfort being supplied to the enemy.” According the Webster’s 1828 Dictionary, “aid” is defined as:

“To help; to assist; to support, either by furnishing strength or means to effect a purpose”

“Relief from pain; ease; rest or moderate pleasure after pain, cold or distress or uneasiness of body. The word signifies properly new strength, or animation; and relief from pain is often the effect of strength. In a popular sense, the word signifies rather negatively the absence of pain and the consequent quiet, than positive animation; Support; consolation under calamity, distress or danger; In law, support; assistance; countenance; encouragement; as, an accessory affords aid or comfort to a felon.”

110621zieveObama has provided this not only for illegal immigrants in this country, but he has done it for other criminal elements in our country, Islamic jihadists in foreign countries, including Muslim Brotherhood governments such as the former government in Egypt.

Remember, Mohamed Morsi was implicated in the attacks on Benghazi. Even the Egyptian people understood that Barack Obama was a supporter of terrorism and either Barack Obama is a complete moron, or he knows exactly what he is doing. One of Egypt’s politicians admitted that the United States is their enemy!

This is just the tip of the iceberg. Barack Obama has installed members of the Muslim Brotherhood in the highest seats in our federal government, including: ◾Arif Alikhan – Assistant Secretary for Policy Development for the U.S. Department of Homeland Security. ◾Mohamed Elibiary – Homeland Security Adviser, whom we called out on this occasion and this occasion. ◾Rashad Hussain – Special Envoy to the (OIC) Organization of the Islamic Conference. ◾Salam al-Marayati – Obama Adviser, founder of Muslim Public Affairs Council and its current executive director. ◾Imam Mohamed Magid – Obama’s Sharia Czar, Islamic Society of North America. ◾Eboo Patel – Advisory Council on Faith-Based Neighborhood Partnerships. ◾John Brennan – Central Intelligence Agency Director

Barack Obama has even told Egyptian Christians to simply shut up and stop protesting the Muslim Brotherhood who actively fought and murdered Coptic Christians throughout Egypt.

Earlier this year we made you aware that Obama was using the CIA to deliver weapons to Obama-supported jihadists in Syria and that he had been providing aid in the form of arms to Syrian jihadists since 2012. He even knowingly waived the ban on arming terrorists to do so.

Obama’s most recent aid to the enemy has come to light in a new program which has been announced by the United States and Turkey that alleges that it will stem the tide of Islamic jihad. It’s called the Global Fund for Community Engagement and Resilience. The US will start off contributing $2-3 million in taxpayer money to fund it, but that amount will increase to over $200 million in contributions of other countries.

According to Dave Jolly at Godfather Politics:

The goal of the global fund is to ‘combat violent extremism by undercutting the ideological and recruiting appeal of jihadists in places like Somalia, Yemen and Pakistan.’ Some critics believe that the concept behind this will actually increase support for more moderate Islamic groups like the Muslim Brotherhood. They compare it to flawed logic of James Clapper, Director of National Intelligence who on January 31, 2012 stated:

“Al-Qaeda probably will find it difficult to compete for local support with groups like the Muslim Brotherhood that participate in the political process, provide social services and advocate religious values. Non-violent, pro-democracy demonstrations challenge Al-Qaeda’s violent jihadist ideology and might yield increased political power for secular or moderate Islamist parties.”

After hearing this, now consider a recent report from John Guandolo, a former FBI agent and counter-terrorism expert who says that the Muslim Brotherhood’s plan is to overthrow the United States government. In an interview with OneNewsNow, Guandolo referred to the Muslim Brotherhood saying:

“[Leaders are] dismissing a massive threat.”

He explains that the Muslim Brotherhood is not as intent on forcing non-Muslims to convert to Islam rather it is to make them subject to Islamic law.

“Whether you are subordinated to it as a non-Muslim and pay the non-Muslim poll tax, or you are killed or you convert to Islam. It’s one of those. It’s their choice. You don’t get to pick from the menu of items – it’s up to them what becomes of you.”

How any of this can be dismissed as “not rising to the level of impeachment” or not considered treasonous, as defined by the Constitution, is beyond me. If this isn’t enough, then there is this documented list of his lies, lawbreaking, corruption and cronyism. Apparently, our elected leaders seem more concerned with negotiating with a traitor on a spending bill, than they do holding him accountable for his crimes. My question to them is, why?

What are your thoughts?

The American West, a group led by Tom Trento, held a seminar on the threat to the United States by Islamists, specifically, the Muslim Brotherhood, with a series of sessions led by Tom Trento and John Guandolo, former Marine and FBI Agent of 12 years.

This is an excellent series. Each video is approximately 2 hours long. There are two more videos to follow. COPY these videos and distribute it to all your church members, friends and family.

Andrew McCarthy on the Muslim Brotherhood and huma Abadin and hillary
1:30 minutes
http://youtu.be/AjY9xKd0EGU

The sister in-law of Tony Blair, the former Prime Minister of England, Lauren Booth, is now a Muslim and here she is at a Mosque in California:
http://www.youtube.com/watch?v=8yNlOVQ4R2U

The Muslim Brotherhood in America, 10 part series, exposing Islamist influence in the United States, including such persons as Grover Norquist.
http://www.youtube.com/watch?v=ul2hpEOngyo&list=SPF834C7965BEA6BCC&feature=plcp

Steve Coughlin, on Islam and the West, the Muslim Brotherhood
http://www.youtube.com/watch?v=nhZe7eZK4dw&feature=bf_prev&list=SP4C29D87AA600650F

What is ISlam?
What did Mohammed himself say it was?
http://www.politicalislam.com/blog/mohammeds-litmus-test/

https://www.youtube.com/watch?feature=player_embedded&v=AU13D4ZPtQM
Published on Jul 25, 2013
Recently, The United West Savannah, GA operation sponsored a National Security Briefing featuring Clare Lopez, former CIA operations Officer and currently a Fellow with Center for Security Policy and the Clarion Fund. Clare, one of the world’s top experts on the Muslim Brotherhood hits this one out of the park as she systematically and comprehensively details the origin, growth and current influence capabilities of this cultural terrorist organization. Most shocking is the deep penetration and overwhelming influence the MB have with President Obama and his Administration. Tune in for a first class national security brief!

http://www.youtube.com/watch?v=rqtJrJ40Cio
Watch these Navy SEAL Team VI families and other family members as they reveal the Obama Administrations culpability in death of their sons in the fatal helicopter crash in Afghanistan following the successful raid on bin Laden’s compound. This is a powerful and riveting briefing thatincluded some of America’s most significant military leaders.