Before you look to do harm to Chief Justice Roberts or his family, it’s important that you think carefully about the meaning – the true nature — of his ruling on Obama-care. The Left will shout that they won, that Obama-care was upheld and all the rest. Let them.

It will be a short-lived celebration.

Chief Justice Roberts actually ruled the mandate, relative to the commerce clause, was unconstitutional. That’s how the Democrats got Obama-care going in the first place. This is critical. His ruling means Congress can’t compel American citizens to purchase anything. Ever. The notion is now officially and forever, unconstitutional. As it should be.

Next, he stated that, because Congress doesn’t have the ability to mandate, it must, to fund Obama-care, rely on its power to tax. Therefore, the mechanism that funds Obama-care is a tax. This is also critical. Recall back during the initial Obama-care battles, the Democrats called it a penalty, Republicans called it a tax. Democrats consistently soft sold it as a penalty. It went to vote as a penalty. Obama declared endlessly, that it was not a tax, it was a penalty. But when the Democrats argued in front of the Supreme Court, they said ‘hey, a penalty or a tax, either way’. So, Roberts gave them a tax. It is now the official law of the land — beyond word-play and silly shenanigans. Obama-care is funded by tax dollars. Democrats now must defend a tax increase to justify the Obama-care law.

Finally, he struck down as unconstitutional, the Obama-care idea that the federal government can bully states into complying by yanking their existing medicaid funding. Liberals, through Obama-care, basically said to the states — ‘comply with Obama-care or we will stop existing funding.’ Roberts ruled that is a no-no. If a state takes the money, fine, the Feds can tell the state how to run a program, but if the state refuses money, the federal government can’t penalize the state by yanking other funding. Therefore, a state can decline to participate in Obama-care without penalty. This is obviously a serious problem. Are we going to have 10, 12, 25 states not participating in “national” health-care? Suddenly, it’s not national, is it?

Ultimately, Roberts supported states rights by limiting the federal government’s coercive abilities. He ruled that the government can not force the people to purchase products or services under the commerce clause and he forced liberals to have to come clean and admit that Obama-care is funded by tax increases.

Although he didn’t guarantee Romney a win, he certainly did more than his part and should be applauded.

And he did this without creating a civil war or having bricks thrown threw his windshield. Oh, and he’ll be home in time for dinner.

Roberts himself changed the mandate into a tax in the majority opinion. If he planned to kill it as unconstitutional then, why kick it down the road? Why not just leave it as a mandate, which was already unconstitutional?

Oh puhleeze. Putting a bow on cow dung is no more than cow dung with a bow.

Not smoking anything. I was very angry this morning, but have been reading and thinking about it all day. I think Obamacare is going to go down, either through repeal or successful challenge of the constitutionality of the tax itself or because it will be unsustainable in light of the states' ability not to participate in the medicaid portion. It is the precedent of the opinion that worries me most. I do believe the tax itself will eventually be found unconstitutional, which will significantly erode any precedent. 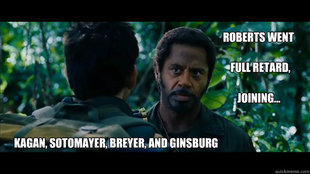 Why not a tax for refusing to be armed at all times in public places?

In pre-revolutionary America, many localities had such requirements for the possession of firearms at home with sufficient ammunition to be an integral part of the militia. There is precedent for that.

Not much of "an argument" when Obama's solicitor dodged and weaved when he was asked more than once by the Supreme court if it was a tax. Roberts turned it into a tax.

So Roberts is a genius now?

People can talk themselves into anything.

He stabbed us in the back. He shredded what’s left of the Constitution.

50 posted on 06/28/2012 2:18:05 PM PDT by Smokeyblue
[ Post Reply | Private Reply | To 45 | View Replies]
To: Whenifhow
Ultimately, Roberts supported states rights by limiting the federal government’s coercive abilities. He ruled that the government can not force the people to purchase products or services under the commerce clause and he forced liberals to have to come clean and admit that Obama-care is funded by tax increases.

He ruled that the government is free to force people to do whatever it wants, by increasing the ability of the government to tax anything it wants anyway it wants.

I don't think that's quite the right analysis. He ruled that the Feds didn't need to worry about the commerce clause, that they had the freedom to do whatever they wanted if they called it a tax. And he gave them the freedom to call it a penalty for those times when calling it a tax might impose limitations.

The 16th amendment was the first to allow the Federal government to tax individuals, through their incomes. The constitution doesn't allow direct taxation. Roberts has stretched to 16th to allow any and every form of direct taxation by the Feds.

In a way, doesn’t it seem (from the above) that Roberts was a clever judicial jiu jitsu artist, turning all that liberal energy against the Democrats?

The Supreme Court doesn’t exist to protect the citizenry from their political choices.

Now, Jobs won’t be created, the middle and even lower classes will see their taxes rise. All in all, not a bad set of affairs for Romney.

52 posted on 06/28/2012 2:19:50 PM PDT by plangent
[ Post Reply | Private Reply | To 2 | View Replies]
To: Whenifhow
"Finally, he struck down as unconstitutional, the Obama-care idea that the federal government can bully states into complying by yanking their existing medicaid funding."

No, he didn't. He ruled they can't bully states into complying with a massive Medicaid expansion by threatening their existing Medicaid funding.

There was never an option for states to opt out of the Mandate. How can they, when the mandate is being collected from individuals by the IRS?

If Roberts is so smart then why didn't the other 4 conservative judges agree with him? Are liberals the only ones smart enough to agree with Roberts?

What Roberts did was to allow unlimited taxation of individuals for any reason whatsoever, including to coerce individuals into engaging in commerce. That could reasonably have been construed as not allowed by the enumerated powers.

I don't think he could due to the Anti-Injunction Act. For a tax to be challenged it must first be assessed, which none yet have. I did read some commentary a while back from someone who said this might be something Roberts would do.

People can talk themselves into anything.

They see a silver lining so Roberts is a 'genius' jurist!

What is the point you are trying to make sending me there?

Update: Senate GOP Will Use Reconciliation in Attempt to Repeal #Obamacare! http://herit.ag/o2S

Are you too smoking crack?

You must be one of those people that hasn’t been utterly devastated by this Obama economy or had any health care crisis.

Glad it’s all fun and politics for you.