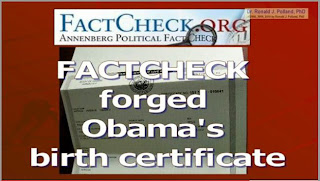 Game over, Barack Obama. This 2-minute video will destroy your birth certificate fraud.

You were not born here. You are not a US citizen. Your FORGED BIRTH CERTIFICATE, fabricated by Annenberg Factcheck, proves you are a liar, a fraud, an imposter, and an illegal alien.

The FIRST EIGHT SECONDS of this video buries your rabid liberal media in their own lies.

They demanded that conservatives accept what the Hawaii Governor said about you and your birth certificate.

We do - now you and your gullible supporters must do likewise.

The former Governor said that requesting a Presidential candidate to show his or her birth certificate to prove eligibility is a legitimate question for Congress.

Mr. Obama - or whatever your is real name - you had seven years to prove who you are, and you refused to do so.

Flashback from the Right Side of Life; - Meet the only 2 people to ever "examine" Obama's SHORT-FORM COLB's. - 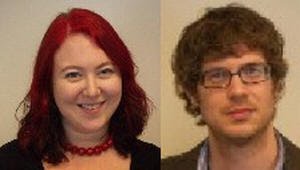 The two FactCheck.org employees who were granted access to Obama’s bogus Certification of Live Birth (COLB) are NOT document examiners or experts. Joe Miller has a Ph. D. in Political Philosophy — so he’s a political operative — while Jess Henig has an M.A. in English Literature — I’m not sure her dye-job is a political or esthetic statement.They are a couple of partisan Obots — just what you’d expect — Jess took the photos presented on their webpage and did all of the writing, while Bob basically held the COLB open for Jess to photograph — suitable work for a Ph. D.

Those two are completely unqualified to perform any kind of forensic examination of any document, and FactCheck.org knows it — and so do Henig and Miller.

FactCheck does say their, “representatives got a chance to spend some time with the ‘birth certificate,’ and we can attest to the fact that it is real and three-dimensional and resides at the Obama headquarters in Chicago.” In my mind, that clearly shows they were working with and for the Obama Campaign and that Obama and his people are involved in this lie. Much more here.

And this; - Blogger manipulates birth certificate image, undermining Obama claims - Jay McKinnon, a self-described Department of Homeland Security-trained document specialist, has implicated himself in the production of palpably fake Hawaii birth certificate images similar to the one endorsed as genuine by the Barack Obama campaign, and appearing on the same Daily Kos blog entry where the supposedly authentic document appears. Much more here and here.

HM, I think Obama had Hillary boxed in from day one.

And then against our American Hero John McCain in the general election, who didn’t have the guts for a fight.

What happened in SC may come back to haunt Obama. There are suspicions of vote buying there as a pay back for Obama pushing Pigford II in the Senate.

jamese777 is simply an Obamabot Troll. From the amount of posts made here and other places on the web is appears jamese777 is a Paid Obamabot and not very convincing.


That’s very true. I would just ignore posts from that Obamabot troll if I were you. Any half way intelligent birther would.
I wonder how much the Obama administration pays for trolling and how many Freepers have switched to being Obamabots because of this paid troll’s work?

There is only 1 way that Obozo is Constitutionally qualified for the office of President of the United States.

If his father is someone other than Barrack H. Obama, Sr, and that person was a U.S. Citizen at the time of Obozo’s birth. It that were the case, it would not matter where he was born because both parents would be U.S. Citizens.

An answer to this Fraud is in order, long overdue....

Isn’t it odd that Lingle’s statement is not at all the same as Fukino’s statement? Why can’t any of them they keep their stories straight?

As a casual observer, I prefer authenticated evidence rather that conjecture.

As a casual observer, I prefer authenticated evidence rather than conjecture.

“What happened in SC may come back to haunt Obama. There are suspicions of vote buying there as a pay back for Obama pushing Pigford II in the Senate.”

From your lips. I have a dream. Of an America where a black (or even a half-white, ~three-quarters Arab and a smidgen black) and a white conservative receive equal justice.

I guess I’ll be waiting a long time. Maybe forever.

” Doesn’t it follow that if he’s lied about everything else [as Corsi and Cashill have so recently and effectively documented], he lied about his BC too? “

Absolutely.
His history of pathological lying, corruption , dishonesty , shady politics , arrogance and missing records makes it more likely that he would lie
about his birth origins .
It defies logic and common sense that for just this one instance,
he would abandon his usual pattern
and decide to behave ethically.
This is buttressed by the fact that he has still not released his
birth certificate and other “ original vital records .”
The same “ original vital records “ ( plural ..hmmmm ) that Fukino stated in her second statement
were “ maintained on file by the
Hawaii State Department of Health .”
And then she breezily declared Barry to be a “ natural born American citizen.”
Without citing what evidence or expertise she used to come to that conclusion.

116 posted on 02/22/2011 6:40:52 PM PST by bushpilot1
[ Post Reply | Private Reply | To 97 | View Replies]
To: Wild Irish Rogue
You said it well. If there is one thing I have noticed about Malignant Narcissists, it's that once they establish their pattern [which always, always includes pathological lying] they stick to it come hell or high water. In fact, in Obama's case, it's been established that he lied repeatedly about his birth narrative. The only thing we don't know is the extent to which he lied. My guess: re: just about every aspect of it. Of course we won't know for certain until more information comes out. Which eventually it will.
117 posted on 02/22/2011 6:44:46 PM PST by Fantasywriter
[ Post Reply | Private Reply | To 114 | View Replies]
To: jamese777

time to give jamese777 the hook, she’s taking up too much bandwith (and oxygen)