Where is that racist Chief Moose these days?

He looks like a reporter for the New York Times to me.

The scary thing it was not just the media.

If the government could have possibly pinned this on white conservatives, they would have. What will make them frown even more is they found him using tools provided to that F.B.I by Bush/Cheney. Tools that the Left want to have taken away.

“The number from a disposable cellphone led FBI agents to the suspect arrested Monday night for allegedly driving a car bomb into Times Square on Saturday evening, according to a senior official.

The suspect didn’t still have the phone. But using a lot of technology and access to database, agents located the suspect.” 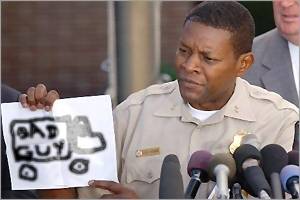 I’m glad that we can use these tools; I’m more than a little irritated that our traitorous newpapers can’t tell the enemy enough times what tools we are using to defend ourselves.

Next time, the bad guy may get away - because he won’t use a disposable phone. This one NEARLY got away, he was on the plane, the plane left the gate and was called back. In just a matter of minutes, he could have made good on his escape. The fact is, we BARELY caught this sack of cr@p.

That would be South Asian man. Or Central Asian man. Just trying not to stereotype. And my Paki neighbors hate it when someone calls them middle eastern. They associate that with wandering Arabs.

Was there ever a white guy that changed his shirt? How did the shirt changing guy ever get into the story? Was this to throw the real terrorist off, make him think the cops were looking for a white guy?

Obomba’s suggestion to the graduating student to visit Huffington Post must have been quite the eye opener.

Hope they noticed the outright bias projected from the left.

>>Yes, the white man in his 40’s is actually the muslim Pakistani terrorist in his 30’s.

35 posted on 05/04/2010 7:19:03 AM PDT by LongElegantLegs ( I have nothing better to do than sit around all night watching a lunatic not turn into a werewolf.)
[ Post Reply | Private Reply | To 9 | View Replies]
To: tatsinfla
The idiot mayor of NY thought it might be an opponent of Obamacare.

A lot of disappointed liberals/progressives.

I prefer the term “NAMESTAN”, which stands for North Africa, the Middle East, and the “stans”. Basically the islamic caliphate that wants us all dead.

I’ve seen that same video clip over and over and there is no proof it is an Anglo male. All I see is a light skin guy with dark but balding hair. Look at any picture of a large gathering of Middle Eastern men and you will see a multitude that would fit that description. Why do we assume they all have dark skin? My complexion is darker than many Middle Eastern men, and I’m mostly Scots-Irish and English.

I tuned in the Today show this morning to see how they reported this. The lead story was that May 4 was the 40th anniversary of the Kent State shootings.

Two white men in a white van became two black men, one an illegal alien, in a dark car.

A white man in his 40 has now become a middle-eastern man, also an immigrant, in his 30’s.