If you don’t presently own any firearms, you may have been considering taking that step in order to protect yourself and your family. Or perhaps you already have what you consider to be an adequate home armory, but is it really enough? In the event that our economy tanks, one certain outcome will be much higher levels of criminal violence. Read Fernando Aguirre’s excellent “The Modern Survival Manual: Surviving the Economic Collapse,” based on his experiences in Argentina after 2001, to see what happens to civil society when a national currency collapses and the banks are closed. Today’s career criminals will be that much more desperate and willing to use violence against their victims. The feral youths who need little encouragement to bust heads for sport in times of relative plenty may be starving, and no moral consideration will keep them from sticking a gun in your face or a knife in your back.

At the same time, the federal government may define this surge of criminal violence as civil disorder and enact emergency decrees, especially if armed citizens begin to fight back on a wide scale. One need look no further than the aftermath of Hurricane Katrina to see how officials react toward ordinary people with firearms during a period of civil disorder. A freeze on gun sales and/or ammunition is a predictable outcome during government-defined “emergencies.”

Most of the readers of this column probably don’t need to be convinced of the wisdom of owning and practicing with firearms. You may even believe that you already possess all of the guns you need, whether a .38 caliber revolver in your bedside table or a small battery of handguns, shotguns and rifles in your closet or gun safe. You may even own one or more of those liberally despised so-called assault rifles. In any of these cases you may think you don’t need to consider any more gun purchases.

There is, however, one reason to purchase at least a few more weapons: to arm thy neighbors. I can hear you saying, “What is Bracken talking about? If that foolish grasshopper of a neighbor didn’t bother about his security when guns were readily available, why should I worry about him now? Besides, he may even be an anti-gun liberal, so the hell with him!”

This reasoning is short-sighted on several levels. First, we have all heard the old saying that “a conservative is a liberal who has been mugged.” When violence explodes during an economic collapse, millions of new conservatives will be created from former left-wingers. And besides philosophically anti-gun liberals, many folks simply grow up in families where guns are not present and reach adulthood having never touched a firearm. But no matter why they don’t own firearms, when the ultra-violence breaks out your neighbors down the street will deserve a way to defend themselves from criminal predation. Simple charity, Christian or otherwise, suggests that we should not leave the elderly couple, the widow or the single mom with young children defenseless against evildoers bent on rape, robbery or murder.

When the incidence of home invasions, carjackings and “express kidnappings” skyrockets, some of your neighbors will discover a sudden interest in acquiring firearms, just when firearms may not be available through normal channels. These unarmed neighbors may then ask if you have any extra firearms to lend to them. Which one of your carefully considered collection of guns will you hand over to arm your defenseless neighbor? Your high-end “concealed carry” pistol, which fits your hand like a glove? Your wife’s? Your pump-action shotgun? Your AR-15 Sport Utility Rifle? The fact is, you will be loath to give away any of them, not even to a neighbor in need. You have acquired each of them for a carefully thought-out reason! But your neighbor is still defenseless.

That is why I encourage you to buy a few extra firearms in anticipation of this future need. I would suggest that a revolver is the simplest entry-level firearm to provide to a non-shooting neighbor. There are no magazines, safety catches or slides to learn to manipulate. You simply open the cylinder, insert the bullets, close the cylinder and the revolver is ready to go. A revolver has the shortest “learning curve” of any firearm. Anyone can learn basic gun safety and effective close-range self-defense with a revolver in one afternoon. In dire extremes you could hand a revolver to a non-shooter after a five-minute period of instruction and dry-firing. Revolvers are intuitive; you can even see if they are loaded or unloaded simply by looking at the cylinder.

Of course, a much greater level of firearms training is highly desirable if there is time for it. If possible, take your non-shooting neighbor to a gun range now, in advance of a period of “civil unrest.” Training a non-shooter in the safe operation of firearms also shows your own overall knowledge of security issues. This demonstrated firearms proficiency will stand you in good stead when your leadership skills and tactical knowledge may benefit your overall neighborhood security posture.

Beyond the simple morality of providing a means of self-defense against criminal violence, there is another reason to be prepared to arm thy neighbors: the force multiplying synergy of multiple fields of fire. Recall the old cowboy movies when the gang of black hats rode into a town where the citizens were forewarned and prepared. As an historical example, consider what happened to the vaunted James Gang on the Northfield Minnesota Raid when they lost the element of surprise. Only Frank and Jesse escaped unhurt. The rest of the armed gang were killed by the townsfolk or captured shortly after, badly wounded.

An armed and alert neighborhood is a very dangerous environment for criminals. In a time of rampant violence, with the ever-present threat of home invasions, more armed neighbors mean more angles of fire for the criminals to confront. Instead of focusing their evil intent on a single home, selecting one sheep in a helpless flock, they will be threatened by fire from many directions and their retreat may be cut off. This compounds their risk compared to attacking a neighborhood where most folks are unarmed and cringing in corners, praying to remain unmolested.

Of course, it is best if your neighbors have all received a high level of firearms training. Otherwise, the risk of a “friendly fire” accident while repelling an armed gang with shots from multiple directions is increased. And of course, you should not provide a firearm to a drunk, a druggie, or a mentally unstable neighbor for obvious reasons. But the danger of living in an unarmed neighborhood is even greater, because such an area is a magnet for repeated violent criminal attacks.

The best outcome would be to leverage your training of individuals in safe firearms usage into general neighborhood self-defense drills. Then if the “James Gang” rides in…they won’t necessarily ride out! Word will get around, and your neighborhood will achieve an aura of armed strength that deters future criminal incursions. Consider why tiny Switzerland has never been invaded by its much more powerful and often bellicose neighbors. It’s not because of the Alps. It’s because the Swiss have a strong tradition of armed self-defense at every level. Both invading armies and criminal gangs go around “hard targets” that are known to shoot back!

If nothing else, from a strictly selfish standpoint, the humble .38 revolver you lent to that widow might provide you with a critical early warning of imminent danger when she fires it in self-defense. Forewarned is forearmed, even if the warning is a rapid series of pistol shots heard from up the street at oh-dark-thirty. But in any case, I would rather hear the widow’s defiant shots than her helpless screams.

So, consider buying a few extra firearms and ammunition while you can easily and inexpensively do so. A used revolver in good working condition can be purchased for as little as $250, a used pump-action shotgun for not much more. And if you don’t know what an SKS rifle is or what they cost, find out. Then you will have the option of arming your neighbors in a time of extreme peril, without diminishing your own family armory.

That will put all the “It better start with a 4” crowd’s panties in a knot.

I still favor 1911s but lately am infatuated with a couple of 4" Smith police revolvers. 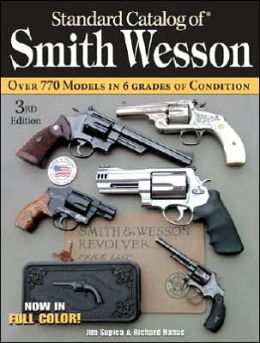 Amazon and I’ve even seen them in big book stores. It’s the last word on Smiths unless you kidnap Roy Jinks and chain him up in the basement.

I think with quality HPs, you don’t sacrifice much with a 9, but you get a slimmer grip in either a single or double stack compared to a .45. Not all guns, but most. In .40, it’s usually the same grip etc as a 9mm, but the main reason is I want anybody in my family to be able to pick up my 9s and shoot them without fearing them. I don’t want any house or road guns that are only for dad to shoot. They can all shoot a 9 effectively, but the “4s” intimidate them. Plus, ammo is usually (not lately) cheap and easy to find.