Remember how the media would use this number as a baton to blast George W. Bush 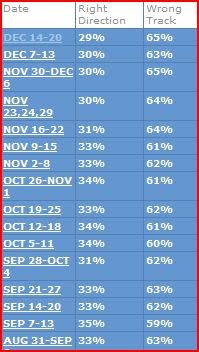 Just 29% of U.S. voters now say the country is heading in the right direction, the lowest level measured since early February, according to the latest Rasmussen Reports national telephone survey.

The percentage of voters who felt the country is heading in the right direction remained in the narrow range of 31% to 35% from July to early November. For the previous three weeks, however, confidence in the country’s current course has held steady at 30%.

The majority of voters (65%) continue to believe the nation is heading down the wrong track. The latest finding is up slightly from last week and has remained fairly consistent for months. In the weeks just prior to Barack Obama's election, more than 80% of voters felt that way. Approval Index at -18

Once their Holocaust bill is read by the American people, they will have no approval. Then what?

“On track” to socialism.

The MSM will still be trying to convince us otherwise while their ratings hit new lows while Einstein’s definition of insanity is there for all to see.

...and down into the twenties we go.

When the Nazis came for the communists,
I remained silent;
I was not a communist.

When they came for the Jews,
I did not speak out;
I was not a Jew.

When they came for me,
there was no one left to speak out.

Tell you what, this used to be one helluva country...and it will be again come November, 2010.

When lies and perversion become normal, the voters, in their “righteous might” must correct the situation, and steer our republic back to its proper course.

I am not at all encouraged by the fact that the GOP leadership allowed this vote to be moved up to 7AM out of “Senatorial Courtesy”. If Harry Reid is gonna cram this up our noses, let them vote late tonight then spend Christmas snowed in at O”Hare. Somebody better get an organized, coherent plan out there to fight this, and if necessary, repeal it. The GOP is not showing at this point they are anywhere near being up to that task.

That’s probably an adequate reflection of how many addled leftists there are in America, 29%.

I am not encouraged either. It is like sending a thank you note for getting your a$$ handed to you.

There is no GOP leadership, unless you count McConnell, Boehner, McCain, Graham, and the rest of the RATA (reach across the aisle) RINO's as leaders.

The “right track/wrong track” question is the worst, most ambiguous poll question, because all it means is “how do you like what’s going on” but it implies that there is a “right track” and therefore can be used as a bludgeon by any group with an agenda. Sure, 61% say we’re on the “wrong track”, but to FR, the right track means going back to small government and states’ rights, while DU would decry the socialism-lite we currently see as not going far enough.