We need to peel off one Democrat to kill this thing.

For those of you glued to your laptops when the abortion known as PelosiCare was passed a couple of weeks ago, this Saturday's fight in the Senate will consist of 10 hours of debate, which were won by Republicans in return for their not having the entire bill read on the floor.

According to Roll Call (subscription required, but the snippet is there), Olympia Snowe (R-Maine) will join the other 39 Republicans in the filibuster.

Plain and simple: If you value your freedom, now is the time to melt the phone lines in your Senators' offices.

As Sen. Jim DeMint (R-S.C.) notes at RedState, a vote by Democrats to proceed to a debate is a vote on the substance of the bill.

I have called, emailed, protested at tea parties, til I’m blue in the face. My Representatives are NOT listening.

Joe Liberman said no already and Ben Nelson is teetering on the No column.... Bombard Nelson its our best bet.

I don’t mean to be a pessimist, but I want to wait and see.

And there go the backroom deals to Collins and Snowe....

7 posted on 11/19/2009 8:00:59 PM PST by Tzimisce (No thanks. We have enough government already. - The Tick)
[ Post Reply | Private Reply | To 1 | View Replies]
To: Bill Dupray
According to Roll Call (subscription required, but the snippet is there), Olympia Snowe (R-Maine) will join the other 39 Republicans in the filibuster. 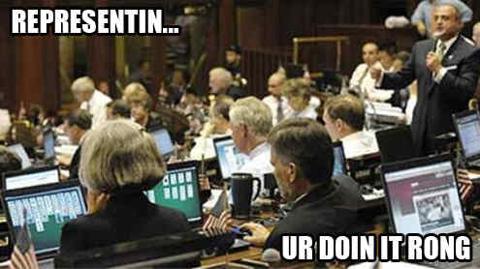 A 10 hour filibuster is what the Repubs got in exchange for not asking the 2k+ pages be read on the floor (and debated)?

Geez, when Jack traded the family cow for the three “magic” beans, he got a better deal than that.

A 10 hour filibuster? Reminds me of the “10 hour diet”...no food, other than drinks, veggies, fruits and nuts, for 10 hours. Amazing self sacrifice.

10 hour filibuster?! I’ve had diarrhea for longer than that.

What about Blanche Lincoln in AR. She is up for election. Anyone in the NW states like Dorgan or somebody in MT,WY, or Bayh in IN?

Bayh should be vulnerable because I think IN has Eli Lilly and Medtronic or Stryker. I think the drug companies, HMOs and medical device companies may have already sold out.

Do we know if Collins and Snowe will hold steady?

Hey Newt - thanks for screwing America in NY-23.

Liberman said no, he wouldn’t filibuster?

It should have been written into the Constitution, and made unable to be amended or repealed, that all votes taken by the Congress and Senate must be passed with an overwhelming majority, and all votes must be recorded with no option to vote “present.”

I’ve been emailing Lincoln, Landrieu and Nelson trying to get them to vote with the Republicans.

We HAVE to stop this bill. We HAVE to. Our Grandchildren depend on us.

Regretfully, I am not living in your fair State, however, fortunately, every Senator represents all US Citizens.

For the sake of your constituency and the entire United States of America, Please Read Every Word of Every Bill that You Vote On.

For the sake of our grandchildren, please vote NO on the Health Care Bill..

According to Rasmussen Reports: “Other recent polling shows that 49% would rather see no health care legislation passed this year than see the current bill become law. Two-thirds (66%) say an increase in competition is more likely than increased government regulation to reduce the cost of health care. That’s one reason there is strong support for removing the exemption from anti-trust laws currently enjoyed by insurance companies.

Only 31% believe Congress has a good understanding of the proposed health care reform. “

Set aside this Health Care Bill. It has taken up too much time and has grown to too many pages that often contradict other pages. The bill should have been written in clear concise English so that the average Down Easter could both read and understand it. Was it John Jay or Alexander Hamilton who wrote in The Federalist Papers that bills should be written so that the common man could understand them? Maybe it was James Madison.

If Congresspeople are admitting on television that they haven’t read the bill and would need a cadre of lawyers to explain it, doesn’t that pretty much mean it should not be passed?

Thank you for taking the time to read my email.

I called LIEberman's office today. He is going to vote for cloture. Voting for cloture is a vote for this unconstitutional, socialist health care bill.

arrrrggghhh!!! The Republicans sold us down the river again. Is there any hope that Coburn, DeMint or someone else will still demand the bill be read in it’s entirety?

Blanche Lincoln is 12 points down if heath care passes in Arkansas. She knows its 69% of the of Arkansas are dead against it. Call and e-mail her.

So, you think Harry will not use the nuclear option to pass this for the empowerment of the democrap run federal oligarchy? HAH! Once the stupid pubbies vote to debate this crap, the democrats will claim there is general agreement and pass the kill on 51 votes, and the fifth column enemy of the people—the mainstream media—will mischaracterize ti all to confuse the stupid people who don;t want to be bothered anyway. Liberalism is a disease which is now so devastating a cancer, it is killing the Republic.