Suspect claims God told him to break into neighbor’s home

A man who’d just broken into his neighbor’s home because he claimed God told him to throw a Bible at a deputy who responded to the scene, according to the Marion County Sheriff’s Office.

Deputies said the victim called them on Sept. 22 because he returned to his home in Summerfield after being gone for about an hour and found that his door had been kicked in.

The man’s neighbor, 39-year-old Robert Hoskins, told him, “I (expletive) up man, I was mad," records show.

Hoskins had asked the victim to borrow clothes and when the man declined, he waited until he left and kicked down the door, according to the affidavit.

Deputies said as they arrived at the scene, Hoskins approached them while only wearing underwear, yelled something along the lines of “I condemn you” and threw a Bible, hitting a deputy in the face.

After that, records show Hoskins was hit with a Taser so that he could be subdued and handcuffed.

The victim’s wife said about $50 worth of clothing was stolen and noted that there was damage to the door, a mattress had been placed on its side and a window had been broken, leaving shattered glass all over the floor, according to the report.

After he was handcuffed, Hoskins defecated himself then asked to speak with a deputy, but if other deputies came over to speak with him he would stare blankly and not answer questions, authorities said.

That deputy wrote that Hoskins said he broke into his neighbor’s home “because God told me to” and said he “freed her,” referring to the victim’s juvenile daughter.

Hoskins faces charges of burglary to an unoccupied dwelling, petit theft, criminal mischief - property damage, battery on an officer and resisting an officer without violence. 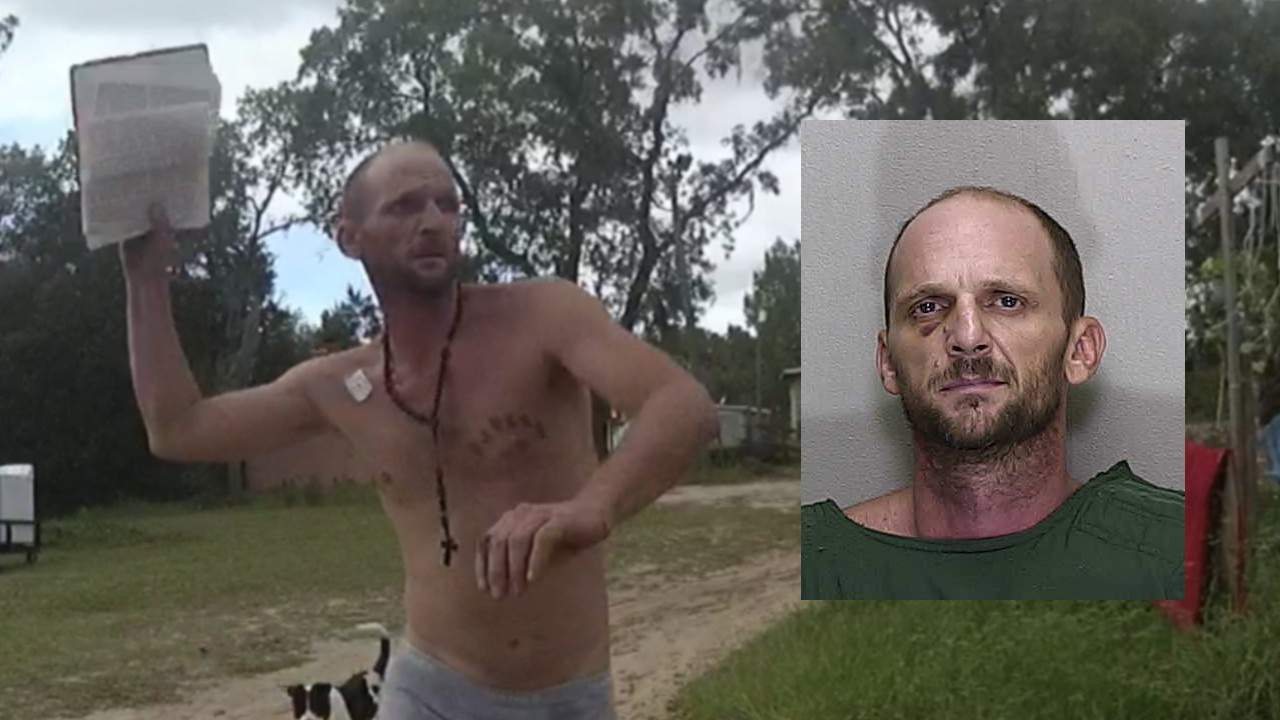 How about this guy just being plain crazy, as in mentally ill?

He should just claim that he’s a recovering Democrat who had a “come to Jesus” moment but didn’t handle it very well.

Hey dude, that thought, or whatever it was you had, didn’t come from who you think it came from.

And you may want to lower the dosage of whatever it is you are abusing yourself and others with.

In the Bible, there are only negative words surrounding the idea of breaking into another man’s house, or of a protector being so weak/neutralized by immorality as to let it happen.

And what’s with the near naked wigged out weird dude act...

What passes as “news” these days, used to be relegated to police blotters and “newspapers” kept behind the counter at certain stores or gas stations.
I could have lived the rest of my life perfectly well, without hearing about this unfortunate disturbed person deprecating while handcuffed.

At least it wasn’t a NAKED Florida Man...

All I know is what I see in the movies...but if he was trying to do an exorcism, he's doing it wrong.

6 posted on 10/06/2020 2:00:34 AM PDT by gogeo (It isn't just time to open America up again: It's time to be America again.)
[ Post Reply | Private Reply | To 1 | View Replies]
To: nickcarraway
I have to say, I still laugh at that Babylon Bee article showing a picture of Trump holding up the Bible outside the Washington DC church that was burned by BLM and Antifa:

And he wasn’t eating anyone!

Where I used to put my sailboat in, to go sailing!