Douglas County sheriff’s deputies are investigating the reported beating of a Kansas University professor who gained recent notoriety for his Internet tirades against Christian fundamentalists.

Kansas University religious studies professor Paul Mirecki reported he was beaten by two men about 6:40 a.m. today on a roadside in rural Douglas County. In a series of interviews late this afternoon, Mirecki said the men who beat him were making references to the controversy that has propelled him into the headlines in recent weeks. Mirecki

Mirecki said he was driving to breakfast when he noticed the men tailgating him in a pickup truck.

“I just pulled over hoping they would pass, and then they pulled up real close behind,” he said. “They got out, and I made the mistake of getting out.”

He said the men beat him about the upper body with their fists, and he said he thinks they struck him with a metal object. He was treated and released at Lawrence Memorial Hospital.

“I’m mostly shaken up, and I got some bruises and sore spots,” he said.

Douglas County Sheriff’s Officials are classifying the case as an aggravated battery. They wouldn’t say exactly where the incident happened, citing the ongoing investigation

The sheriff’s department is looking for the suspects, described as two white males between ages 30 and 40, one wearing a red visor and wool gloves, and both wearing jeans. They were last seen in a large pickup truck.

Anyone with information is asked to call Crime Stoppers at 843-TIPS or the sheriff’s office at 841-0007.

Mirecki recently wrote online that he planned to teach intelligent design as mythology in an upcoming course. He wrote it would be a “nice slap” in the “big fat face” of fundamentalists.

The remarks caused an uproar, Mirecki apologized, and KU announced last week the class would be canceled.

Hmmm. Let's see. Which side was it that wrote about "slap in their big fat face?"

262 posted on 12/06/2005 7:33:35 AM PST by MontanaBeth (Never under estimate the enemy.)
[ Post Reply | Private Reply | To 41 | View Replies]
To: Fester Chugabrew
"Actually, what it looks like is that the position of all materialists and evolutionists is scientifically and morally bankrupt. Look, the guy lost a tooth. He was beaten severely. That proves beyond question evolutionists and materialists are plumb dumb and wrong. It also proves that you had best repent before the rest of us fundies don red baseball hats and wool gloves. Deal with it. Be sure to check the bushes outside before you go to sleep."

Hey Fester, are you the jerk that said this? Is this what all the "fundies" stand for...hate and thinly-veiled threats of personal violence?

Guess there's more than one of you who fails to recognize sarcasm. It's to be expected. Are you on the lookout for Christians with red hats and wool gloves?

My money says it was a phony episode.
IF he was really beaten up by strangers, it was probably a robbery and he saw an opportunity to bash Christians.
Too bad they didn't break his knees.

You're trying to cover up your own bad judgement.

Like this bubblehead professor, you're looking for something that isn't there. I only wish to point out the inconsistency of evolutionists who get their panties in a twist when deep down they believe life is merely the result of some unguided, unintelligent cause.

To: Muzzle_em
...he saw an opportunity to bash Christians. Too bad they didn't break his knees.

I can't believe a true Christian would ever think this way. Shame on you for falsely representing yourself as a Christian.

Do you know Brian Pugh? (bpughsdg)

"Like this bubblehead professor, you're looking for something that isn't there. I only wish to point out the inconsistency of evolutionists who get their panties in a twist when deep down they believe life is merely the result of some unguided, unintelligent cause."

That is like being a CSI in Hong Kong. "He was 5 foot tall, had yellow skin, and a haircut like Moe."

(I know Asians do not have yellow skin. I was just imitating the description as the perps being 'white'.)

For starters, it looks like the reporter jimmied the story with the "hospitalized" title.

Did he drive to the hospital, or was he founded helpless by a passerby?

Check his bruises for wool.

Snort. Looks like "virtual ignore" is a highly fluid and flexible notion. The evos think they have a poster child...

I do hope a very thorough investigation is conducted.

There is also the possiblity that it could be an assault unrelated to his recent notoriety--like a gay-bashing.

He did not. It is interesting how militant evolutionists, when losing their arguments, start into falsely accusing their opponents.
278 posted on 12/06/2005 7:52:49 AM PST by dotnetfellow
[ Post Reply | Private Reply | To 273 | View Replies]
To: Will_Zurmacht
Creationists react to news of attack on Prof. Mirecki... 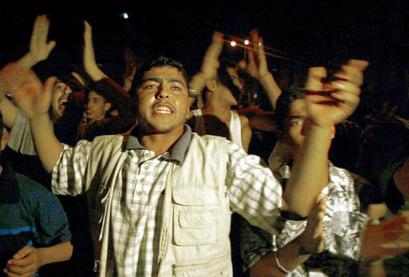 Are you afraid to actually ping people or do you just enjoy talking to yourself?

And yes, he DID gloat over the beating.