MoveOn.org can’t blame this one on shadowy conservative operatives “Crazed Christian fundamentalists” smeared along with Jews

Now perhaps MoveOn will claim that a huge invisible (Republican) elephant hacked into their Web site and posted this under the name “Noah Winer.”

This essay describes many of the familiar neo-conservatives as having “dual loyalties,” making policy decisions in the interests of the State of Israel as much as the United States. http://www.counterpunch.org/christison1213.html

Let’s see what the Counterpunch article has to say.

…We have a Jewish friend who is not bothered by the term [dual loyalties] in the least, who believes that U.S. and Israeli interests should be identical and sees it as perfectly natural for American Jews to feel as much loyalty to Israel as they do to the United States.

By KATHLEEN and BILL CHRISTISON

Too Many Smoking Guns to Ignore: Israel, American Jews, and the War on Iraq

"Authors’ note: Given the prevailing atmosphere in the United States for debate on Israel, the frequency with which critics of Israel are accused of malicious ethnic motives, and the widespread skittishness about associating Israel or American Jews with war planning against Iraq, the following items are of particular interest. The first of these items reports a clear Jewish effort to suppress any evidence of Jewish support for war. "

Bill Christison is also a 9/11 denier (like a Holocaust denier except he writes off or dismisses two missing skyscrapers and four missing airplanes instead of six million missing Jews and three million missing Polish Catholics) http://www.dissidentvoice.org/Aug06/Christison14.htm

Perhaps the Christisons had better put on tinfoil hats before the Zionist Occupied Government’s Evil Mind Control Rays make them forget all about this horrible conspiracy. In any event, it is informative to see the kind of sources that MoveOn.org itself (as opposed to the sideshow freaks it welcomed at its Action Forum) uses as references on Israel and the Middle East.

These people are beneath comtempt. Proof positive liberalism is an incurable disease.

Any time a democracy defends itself against its enemies foreign or domestic liberals worldwide get their panties in a bunch.

When one of those democracies is overwhelmingly Jewish the Jews become the enemy.

I don't feel the need to say "enemy" as liberals view anyone that defends themselves as a true enemy, not a political opponent.

"The Israelite religion [is] nauseating."

"What is the secular basis of Judaism? Practical need, self-interest." "What is the wordly cult of the Jew? Haggling. What is his wordly god? Money!..." "Money is the jealous god of Israel before whom no other god may exist. Money degrades all the gods of mankind and converts them into commodities...." "What is contained abstractly in the Jewish religion -- contempt for theory, for art, for history, for man as an end in himself..." "The social emancipation of the Jew is the emancipation of society from Jewishness."

From Karl Marx's essay on The Jewish question

"...since the Mensheviks were the faction of the Jews and the Bolsheviks that of native Russians, it would be a good thing to have a pogrom in the Party."

"In the Doctors' plot [Stalin's final purge to kill the three million Jews of Russia] of 1952-1953, a majority of those accused were Jews, but some were not. The Jewish element was publicly emphasized but it was under the guise of a link with "Zionism...."1 (emphasis added)

"The Jews are descendents of of apes and pigs."

Oscene leftwing, anti-Semitic protests. It's no wonder that even far back as the 1960s that a person who witnessed the Nazi era thought the New Left were the Nazis redux.

"Anti-Semitism is the Socialism of fools."

"Anti-Semitism is the intellectualism of stupid people."

Liberals, Moderates and Conservatives apply to everyone not one particular ethnic group. Sheesh!

7 posted on 10/27/2006 5:20:03 AM PDT by SJackson (A vote is like a rifle, its usefulness depends upon the character of the user, T. Roosevelt)
[ Post Reply | Private Reply | To 6 | View Replies]
To: 1st-P-In-The-Pod; A_Conservative_in_Cambridge; af_vet_rr; agrace; albyjimc2; Alexander Rubin; ...
FRmail me to be added or removed from this Judaic/pro-Israel/Russian Jewry ping list.

I've come to realize that not only don't they (moveon.org) care, they don't need to... I had something of an apiphany the other day, when I was talking to my step mother. She, and so many other people I've spoken to have such deep held beliefs (like "Bush is an idiot" and "everyone is against the war in Iraq"), yet other than reading the NY Times, and watching the MSM news, she has NO INTEREST in checking out any other sources. None at all. Consequently, she'll never learn about these things. The only people who actually go to these web sites are the ones who already know about this... The only way people like my stepmother would find out about it is if it were published in the NY Times, or on the evening news. And even when the cover is blown off a scandal, like the "RatherGate" scandal, it really didn't register with her.

Wonder what Rabbi Daniel Lapin is going to say about this! 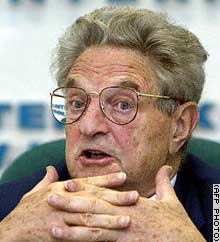 Wow . . . most atheists assign blame for this "philistine" worldview to chr*stianity, but Kark had it goin' on! Makes me pround to be 'echad michasidei-'ummot-ha`olam!).

To acknowledge HaShem is indeed to have contempt for "theory" (Hellenistic philosophical speculation built on top of the notion that only the most immediate reality is necessary to justify everyday life), for "art," for "history" (in the Hegelian sense of it being a teleological "budding rose unfolding" to an omega-point of perfection, despite not having been "programmed" by anyone), and most of all for "man as an end in himself."

Ironically most people who share Marx' contempt for this worldview actually blame it on chr*stianity. Idiots.

Yet those folks STILL continue to vote Democratic. Morons all.

However, we cannot vouch for the terrors practiced by the American Left.

You must consult with Al Haj Tawil Hed..

15 posted on 10/27/2006 9:19:28 AM PDT by sheik yerbouty ( Make America and the world a jihad free zone!)
[ Post Reply | Private Reply | To 14 | View Replies]
To: MarkL
The only way people like my stepmother would find out about it is if it were published in the NY Times, or on the evening news. And even when the cover is blown off a scandal, like the "RatherGate" scandal, it really didn't register with her.

When did my mother marry your dad?

Woweee. And here I thought Ray McGovern was the king of antisemitic ex-CIA leftists, but this creepy lunatic puts him to shame.