Navigation: use the links below to view more comments.
first previous 1-20, 21-27 last
To: Crimson Elephant

Well, under every chart, the last decade sucked. We are basically at no gain, or perhaps even a small loss for the past ten years.

You know, ten years is a big chunk out of one’s prep for future. Assuming you are in the market for forty years, that’s a big chunk. I don’t see how losing a decade can ever be justified as anything but pretty poor.

I’d like to see this chart with the effects of inflation (increase of the money supply) calculated in.

Kind of like Dick Morris telling him he would lose the election if he vetoed the welfare reform act a 3rd time. 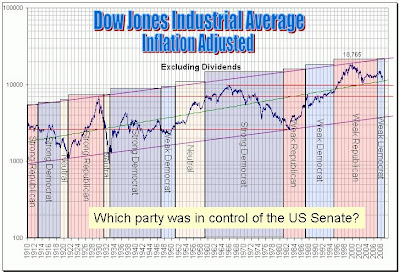 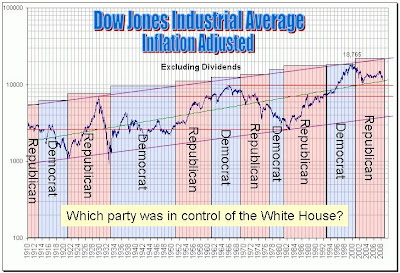 Updated your excellent chart to include who was in control of the White House and the Senate. Click on the chart to see full size. Draw your own conclusions.

Well... for starters, as least as regards the relationship between the political party in power and the stock market, I think you have to pretty much discard everything prior to Eisenhower: the economy was so different prior to the Great Depression, and the Great Depression was such a unique event, that comparisons with current conditions are pretty much meaningless.

And once you get into the 1950s and beyond, what those charts say to me is that economic progress has been driven much more by relative international competitive advantage and technical innovation than by political intervention. We have learned a few things: how to better control inflation and shorten and flat in economic downturns, for example, but since about the 1970s we seem to unlearned some others, for example how to operate an economy in such a manner that does not create increasingly uneven income distributions and concentration of wealth and political power.

My own belief has increasingly become that the cost of individual freedom is some degree of restraint in these disparities. Usually this is regarded as a liberal position, but I find it completely consonant with a concern for individual liberty: if you look at the countries with the greatest personal freedom - which I define as least desire to dictate the intimate personal behavior to others as opposed to simply maximizing short-term individual ecconomic opportunity even at the cost of enormous differences in the realization of long-term human ecconomic potentials (for example, the United States actually has relatively low levels of economic mobility compared your parents when compared to most European countries, largely because it educational opportunities there are more evenly distributed) - you tend to find that these are places with - by design - more modest economic disparities than our own.

Of course, if someone is the sort of conservative highly interested in in dictating "correct" behavior to others, or the sort most concerned about absolutely maximizing the individual economic opportunity of the most talented at the cost of everything else, then we are going to disagree.

Okay.. if we look at 1950 and beyond, the most glaring thing to me is the period between 1958 and 1980, when the Democrats had a solid majority in the Senate. The DJIA had a terrible run between 1958 and 1980 and using the inflation adjusted numbers, 1980 ended up being the same valuation as 1910! I know it’s more complicated than that but from a distance, it looks like quite an indictment of a Democrat run Congress.