ALL EVIDENCE IN SUPPORT OF THE COVINGTON CATHOLIC STUDENTS IN WASHINGTON, DC (to copy & paste)

CLAIMS MADE AGAINST THE STUDENTS

Quotes by Phillips or interviewer:
“Then Phillips describes the tense moments . . . when a young man got right in his face.”
“This young fella put himself in front of me and would not move.”
“I had put myself in a dangerous situation.”

Quotes by Phillips:
“. . . two hours of back-and-forth between the black Israelites and the students . . . “
“They were just a big mob, just an ugly mob.”
“Their attention was on the black Israelites, and when I seen what was happening right at the end, and where it was getting . . . it just needed that one little spark and that mob would’ve descended on those four guys and ripped them apart . . . “

LOL - What an imagination!

0:00:00 - Video begins with the preacher shouting at Indigenous activists.

1:07:30 - Preacher targets the students standing at a distance on the steps. The students start a school chant (?) in an effort to ignore him (?).

1:12:19 - Phillips and company march toward and into the crowd of students.

1:14:30 - The students begin listening to and interacting with the preacher who continues to hurl slurs and insults.

Video (1:17) https://www.youtube.com/watch?v=53yIntSE3CE&ab_channel=JesseGuzman
Another angle of activist Phillips and company marching toward the crowd of students. The students are not looking in the direction of Phillips until his group walks up, drumming and chanting. Note there’s plenty of room to walk up the steps.

Video (2:20) https://www.youtube.com/watch?v=5oza37DTXwk
Close-up of Phillips and company walking through the crowd. The students are clapping, dancing, talking, and laughing. Phillips stands in front of one student and drums in his face. The student stands still and smiles.

Video (3:48) https://vimeo.com/312411257
Another closer angle of the poor student being harassed by Phillips with more on the argument between the protestor and another student. Also on this video, a chaperone gets involved.

Video (9:90) https://mirrorbot.ga/media/ahtnos.mp4
Longer video, starting with Phillips drumming in front of the student’s face. An “indigenous protester” tells another student to “go back to Europe.” At 4:30, the students start debating with the preacher, who’s still spewing vitriol. Finally, the students all turn and walk away, chanting, “Let’s go home!”

TOPICS:
KEYWORDS: covington Navigation: use the links below to view more comments.
first 1-20, 21-36 next last
Just wanted all info on one thread to keep track of the story so far.

All info compiled from FR threads and posts made by multiple FReepers. If you see any errors, please advise in the comments below.

Those kids need to be invited to the White House for a “beer summit.”

That would be a nice gesture.

"There was that moment when I realized I've put myself between beast and prey," Phillips said. "These young men were beastly and these old black individuals was their prey, and I stood in between them and so they needed their pounds of flesh and they were looking at me for that."

Speaking from his niece's home, Phillips said: "I'm a Marine Corps veteran, and I know what that mob mentality can be like. That's where it was at. It got to a point where they just needed something for them to ... just tear them apart. I mean, it was that ugly."

Phillips said he recalled "the looks in these young men's faces ... I mean, if you go back and look at the lynchings that was done (in America) ... and you'd see the faces on the people ... The glee and the hatred in their faces, that's what these faces looked like."

We got Megan McLame to say she’s sorry. She’ll get it wrong again.

Ah, I see what you mean - well, at least she apologized.

Most of the media will probably stick with: “The story is more complicated than previously thought.”

” If you see any errors, please advise in the comments below.”

Yeah, the lying old Indian’s name, aka “Dances with Soros”.

You may want to add the reply of Scott Adams (”Dilbert”) to his earlier criticism of the boys, for which he apologizes unambiguously. It’s long, and the meat doesn’t start until about the 2:30 minute mark, but it’s thorough and objective, in the usual Scott Adams fashion. (Also it took me a bit of time to find the “unmute” botton on his site, but there is one).

People can be absolutely insane.

We have yahoos , in their self-righteous fury, venomously calling for the destruction and DEATH of some teenagers for supposedly being a little defensive as a result of being taunted by an obnoxious person.

The kids are guilty.

When the chief goes up and starts Hey How Are Yaing in the kid's face he does swallow hard at one point. A sure sign of cowardice form Chief Tom Tom. All Tom Tom no ponies.

Actually, it is kind of gratifying that people care about this. Soon it will be the “Rule of .308” and winners and losers will be obvious.

Of course they are innocent. But that did not stop the leftists in charge of the school and diocese from condemning them immediately based upon the mob and the information warfare that edited video to show only a small piece of what happened.

I am sick of leftists being in charge of my Catholic church.

The chief is now saying he was trying to diffuse the situation. I would love to have seen him get in the face of the black Israelites and beat his drum. 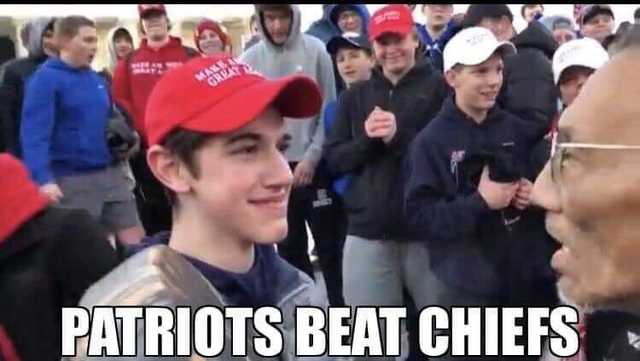