“These people tend to repeat a lot of gossip and tend to think running to an alternate authority is the way to cut off actual authority. “I immediately went to the lawyers...” She is testifying that she was part of a conspiracy against the US.”

And that is exactly what this is, it is an organized conspiracy and this needs to be consistently hammered home without any reserve or hesitation from the Republican side.

Time to call it what it really is.

Blacks always seem to use speakerphone whenever they’re in public

“I see. He doesn’t pass your “looks test”. so throw him under the bus.”

Oh, for God’s sake: This is all THEATER!!! That’s all the Rats have! On such a stage optics are EVERYTHING! I am not at all throwing Rudy under the bus. But he would serve his client better by putting a damper on his theatrics.

And you would replace Rudy with whom?
Or do you just want him to CHANGE?

More than you even know... These same Zero Ambassadors are all in for the Butt!

Joe fired the prosecutor investigating Burisma, which had Hunter on the board. That is the real crime, Hunter being on the board is the product of the crime.

I wholly concur that Rudy may be a good lawyer, but on TV he certainly WAS a loose cannon.

When he was on a tear, I would cringe, holding my breath that he wouldn't misstep....he poured the words wildly out, on and on....the interviewer couldn't stop him at all, even when time ran out and it was commercial break, he couldn't be stopped, he picked up NO subtle hints from the interviewer, entirely tone deaf that his time was up....and then he had to be cut off, just like I'm cutting myself off from my own sample rant, LOL. 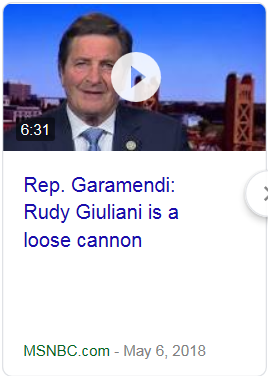 308 posted on 11/21/2019 8:34:50 AM PST by JonPreston
[ Post Reply | Private Reply | To 300 | View Replies]
To: maggief
Didn't Holmes testify this morning that the conversation he overheard was between Trump and ambassador Sondland while they were seated outside a cafe having lunch in the Ukraine?

Since the Ukraine is 7 hours ahead of the U.S. and if they were having lunch at noon, that means Trump was on the phone in Washington at approx. 5:00 a.m. in the morning........I don't think so.

310 posted on 11/21/2019 8:35:13 AM PST by kabar
[ Post Reply | Private Reply | To 283 | View Replies]
To: truthkeeper
More likely that there is a FISA type of involvement that gave this guy a readout of the call. Cross examination on this one is going to be interesting material.

I noticed that yesterday when one of the Dem reps was asking Sondland to be really sure about what was said, because he mentioned that it was possible that they might be able to get a transcript. It seemed odd because it occurred to me right away that they already had a transcript or he wouldn't have said it.

pretty sure he is a early riser

Hill confirmed that she had met with Steele during the 2016 election.

During her testimony Fiona Hill revealed that she had a three-year working relationship with ‘Christopher Steele’, the former British spy contracted by opposition-research firm Fusion GPS to produce the infamous Steele Dossier, but doubted the accuracy of his dossier, according to a transcript published Friday.

a Politico profile on Hill from September 30, which described her relationship with Steele. “She had a high opinion of Steele, and thought he was very smart,” a foreign-policy veteran, and one of Hill’s close friends.

313 posted on 11/21/2019 8:36:47 AM PST by caww
[ Post Reply | Private Reply | To 301 | View Replies]
To: Shanty Shaker
These people tend to repeat a lot of gossip and tend to think running to an alternate authority is the way to cut off actual authority. “I immediately went to the lawyers...” She is testifying that she was part of a conspiracy against the US. Seriously

It's a reflection of our society, the HR office has a line around the building waiting for the employee to voice concern over something that bothers them and they file a complaint.

“You said Rudy, altho a good lawyer, was basically a messy slob. You know what? Mark me down as someone who is going to defend EVERY SINGLE FRIEND of president Trump, regardless of how they look to you.”

Nice try. A lawyer’s foremost obligation is to serve his or her client’s best interests, within legal ethics; and coming off as a hyperventilating blowhard on TV does NOT serve one’s client well, because this case is not an action in a court of law, but an action in the court of public opinion. This case is ALL about the 2020 election.

So Rudy is a hyperventilating blowhard?

They ALL thought that.

Please clutch your pearls quietly.....
What you “see” as theatrics others see as passion. Rudy displays the outrage that many of us feel. The George Bush pattern of sitting mute & not fighting or answering outrageous accusations is a losing recipe. Millions of us got sick of that! Perhaps Romney is more your cup of tea.